Miles Long, 52, from Las Vegas, has over 20 years’ worth of experience in the adult film industry, having first made a name for himself in the late noughties.

Appearing on This Morning today Miles said that he struggled to meet women after growing up as ‘the shy nerdy kid with the bad haircut’, but that he has since lost count of his sexual partners. 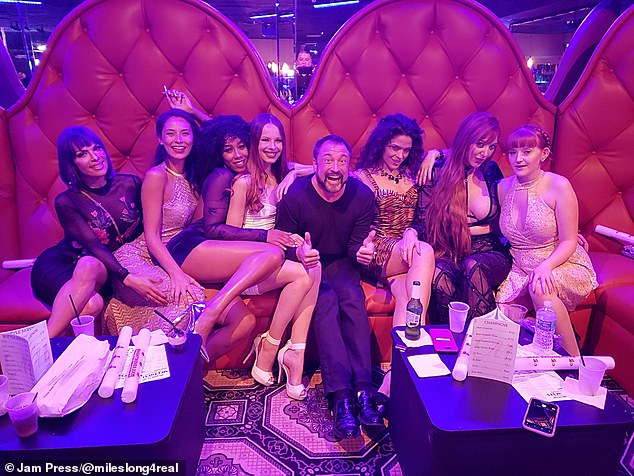 Miles, who has been married and divorced three times, said: ‘I guess I did pretty well because they said: “You’ve got a knack for this, we’ve got you more work, you just stay here”.’

The adult star decided to tell his parents about his new career early on to avoid them stumbling across one of his performances, revealing: ‘People find that their parents are a lot more forgiving than they expect.

‘My parents were consumers of that material and so after a couple of years we said we should probably tell our parents what’s going on so they wouldn’t be surprised by it.

‘We took them out to dinner and said “Hey this is what we’re doing, we’re not screwed up, we’re not on drugs, everyone’s tested and we have a good time. It’s not so bad”.’ 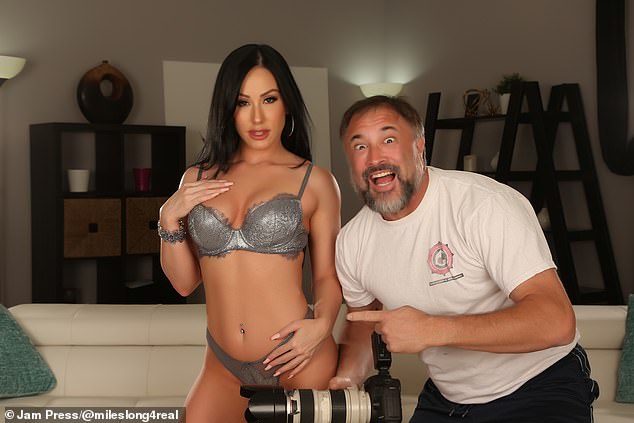 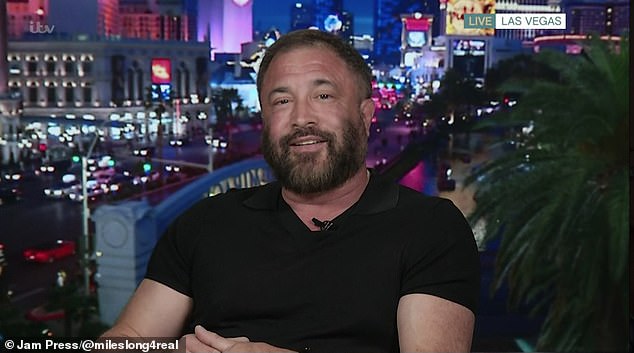 Appearing on This Morning today Miles said that he struggled to meet women after growing up as ‘ the shy nerdy kid with the bad haircut’, but that he has since lost count of his sexual partners

The star, who now works both in front and behind the camera, has won awards for his bedroom talents and doesn’t believe that pornography will give viewers a ‘false view of what sex is’.

As for his own love life, the film producer and actor is open to what the future holds: ‘I think generally speaking, most people [want to settle down] – but I think the secret is never to look too hard for it.’

Curious about what goes on behind-the-scenes? Here, Miles reveals what really happens on set and it’s not all as sexy as you might think.

VIAGRA HAS ITS PLACE BUT WE DON’T USE INJECTIONS

‘When I started out there weren’t the aids like there are now, which is why you saw the same 20 guys in every adult film – because it was a hard job,’ Miles said.

‘It’s a very unique skill set being able to get hard, stay hard, and orgasm on cue, as well as trying to do it with a bunch of people standing around watching you.

‘I’ve never had to take medication to help with erections, but I’ve heard horror stories where the male talent has taken an injection and experienced priapism (prolonged erection) after or had an erection lasting more than four hours.

‘To get rid of the erection they had to go to hospital and have the blood drained out of their penis.

‘Also, stay away from injections. They can really mess up normal erection issues; your body is not your own anymore and you could end up having to rely on using them to get hard. I’ve always done my erection the old-fashioned way.’ 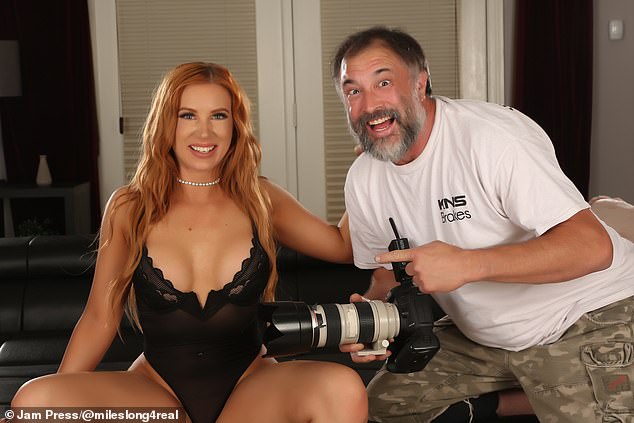 FLUFFERS ARE A THING

Miles revealed that for big scenes there can often be a so-called fluffer around to help get the male stars stay ‘motivated’ before their turn – by giving hand stimulation or oral sex.

He said: ‘The only time I have ever seen fluffers were in huge group sex scenes where a female performer was trying to do like 200 guys.

‘There would be a few fluffers off-camera, getting the next guys ready so they could hop in as soon as the other guys finished. It sounds fun but it’s kind of off-putting and very detached.

‘The girls who do that job normally have a fetish for giving oral sex to a lot of guys in a row, because it doesn’t pay much.’

Ever wonder if the chemistry on screen is real? According to Miles, that kind of heat is impossible to fake.

He said: ‘It’s what separates the superstars from the rest of the girls in the industry. The actresses who love sex and the job will keep going even during cuts, because they’re enjoying it.

‘When I’m directing I want two people who can’t wait to have sex with each other. That way when I film it, I know it’s going to be spectacular.’ 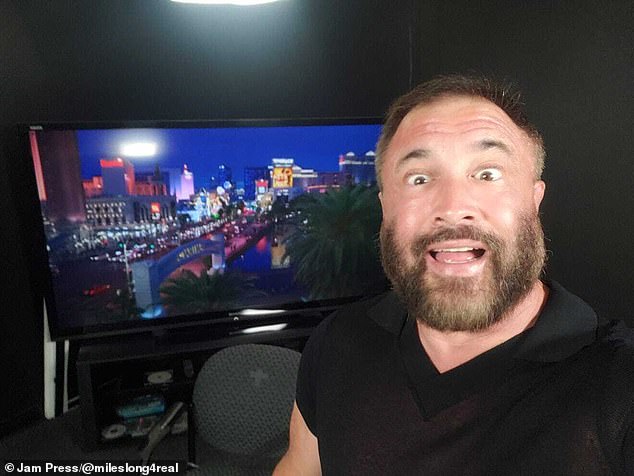 Miles, pictured ahead of appearing on This Morning today, says that chemistry on screen is impossible to fake 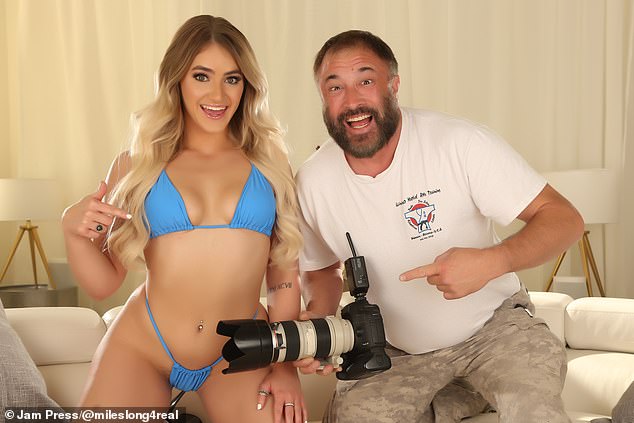 DON’T BE A DIVA

Like any industry, Miles says word-of-mouth counts for everything and other people will soon hear if you’re difficult to work with.

Miles said that he’s always the ‘first person to grab the baby wipes’ to help his scene partner clean up.

‘I think a little bit of courtesy goes a long way and that’s what they’ll remember when they think of who they would like to request in the future, or recommending you for a job.

‘There will be times when someone will smell or have bad breath but I’ve always tried to think of someone’s feelings first.

‘When you are doing something so intimate, the worst thing you can do is make someone feel self-conscious because more than anything it will affect the scene and the overall chemistry between the two of us.

‘I always bring out a box of mints just before the scene, take one myself and then offer them to my scene partner.

‘It’s a perfect way to help them and you have a guaranteed good scene with no bad breath from either of you.’

Miles says the one thing he never leaves home without is baby wipes.

‘I always make a point to shower and clean up, as well as shave downstairs,’ he said. ‘But if there’s a delay between doing that and the scene itself, I make a point to baby wipe again and I always offer them to my scene partner. 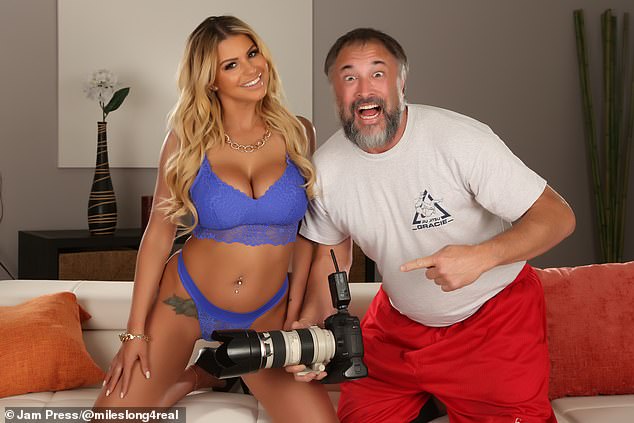 Miles, pictured shooting a film with a fellow adult star, revealed that office romances are very common in the business as it can be tricky to find someone outside the industry who is okay with the job

The actor also revealed that office romances are very common in the business as it can be tricky to find someone outside the industry who is okay with the job.

He said: ‘I don’t date outside our industry. For one thing, it’s very comforting knowing that the person you are with is completely STD-free because we’re so rigorously tested.

‘It’s a hard job to be supportive of – I completely get it – but it’s still a job at the end of the day.

‘Normal’ partners can also find it intimidating to think about how many women I’ve slept with. For instance, I stopped counting after I hit 1,000 and that was very, very early in my career.

‘Now, after this many years in the business, that number is well in excess of 4,000. And that would be a conservative estimate!’

‘I can say that’s definitely something every male should consider adding to their bucket list.

‘There’s nothing quite like having a whole group of your girlfriends try and please you at the same time.’