TOTTENHAM have not won a major trophy for 5,001 days.

But the glory-shy North Londoners are actually only seventh in the list of Premier League clubs who have bagged a piece of silverware most recently. 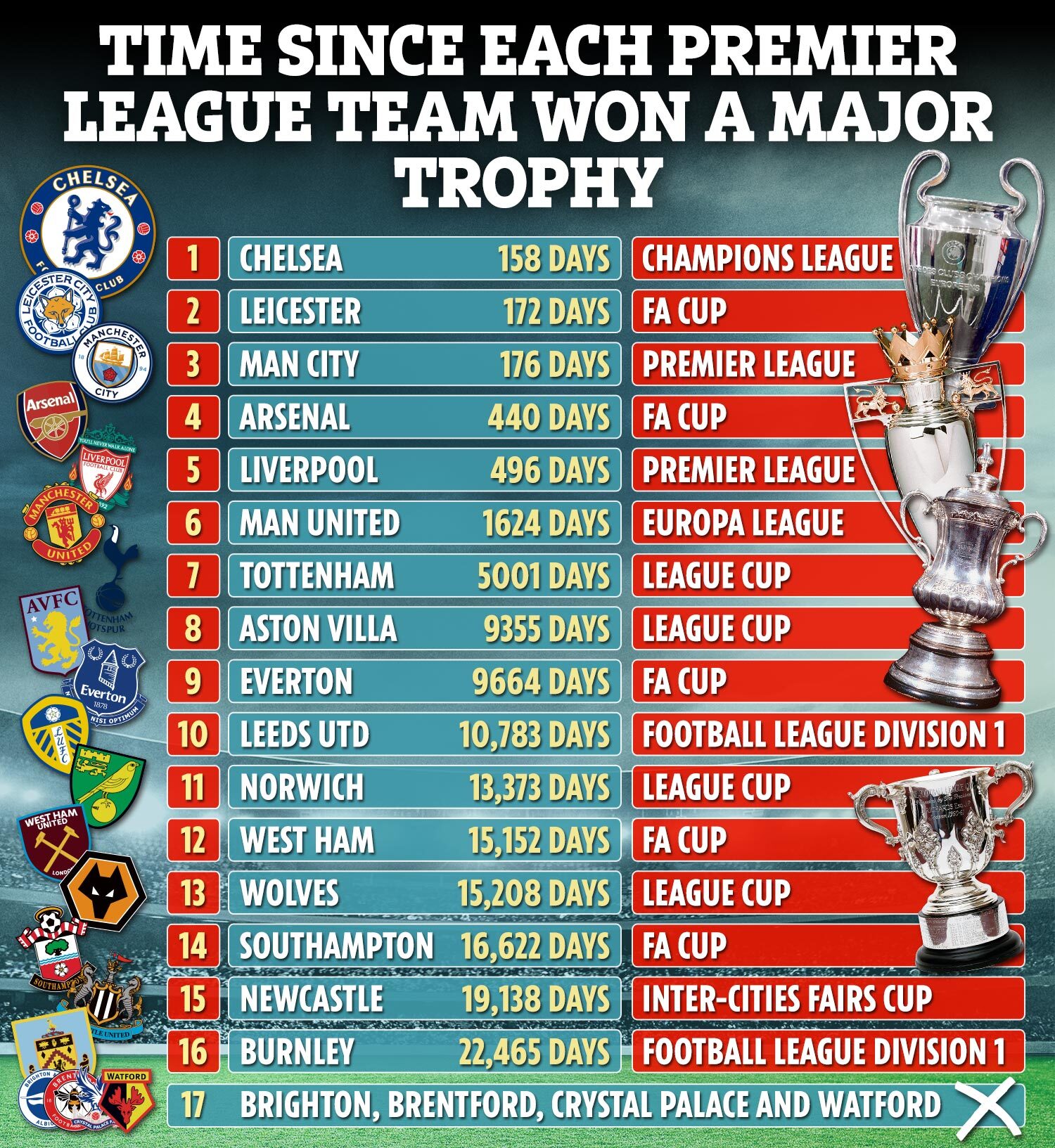 And many fans are convinced the Italian will lead the Lilywhites to their first trophy since their League Cup triumph over Chelsea on February 28, 2008.

Spurs came back from 1-0 down at Wembley with Dimitar Berbatov's 71st minute goal cancelling out Didier Drogba's opener to to take it to extra time.

And Jonathan Woodgate sent Tottenham fans wild as he scored the winner just four minutes into the first additional period.

But it has been a run of heartbreaks since with FIVE runner-up spots following which has led to the phrase 'Spursy'.

Arguably their biggest heartbreak came in May 2019 when they lost a drab Champions League final to Liverpool in Madrid.

And they were overcome once again in the League Cup final with a 1-0 defeat to Manchester City earlier this year.

Chelsea fans have had to wait the least time of all the Prem clubs – just 158 days – after the Blues beat City 1-0 in May's Champions League final thanks to Kai Havertz's goal.

Leicester come in second at just 172 days after they denied Chelsea a double at Wembley in May with a 1-0 FA Cup final win.

And Manchester United are the only team to have waited less time than Spurs – 1,624 days – since their 2-0 Europa League final win over Ajax in May 2017.

Aston Villa and Everton are the only other sides for who it's been less than 10,000 days.

While Leeds are the last team who tasted glory in the 90s or later.

Norwich, West Ham and Wolves fans born after the mid-late 80s will not know what it's like to see their team lift a major trophy aloft, with only the Hammers looking remotely likely to change that any time soon.

For Southampton, Newcastle and Burnley it may well be two generations of fans who have been bereft of reasons to celebrate.

But that will be scant consolation to supporters of Brighton, Brentford, Crystal Palace and Watford whose sides have never won a major honour in their long histories. Ever.

‘This is what Shakespeare should be’

Opinion: Ryan Lochte, trying to qualify for fifth Olympics at 36, says ‘rock star’ days behind him