James MacDougald believes he has rewritten Florida history and added further intrigue to the early story of the Tampa Bay area. St. Augustine, founded in 1565, is considered the first successful European settlement in what is now the United States.

But it has long been assumed that, in 1521, Charlotte Harbor was where Juan Ponce de León, the Spanish explorer and supposed seeker of the Fountain of Youth, was mortally wounded while failing to establish the first European settlement.

“These maps change everything,” MacDougald, a St. Petersburg resident, said. 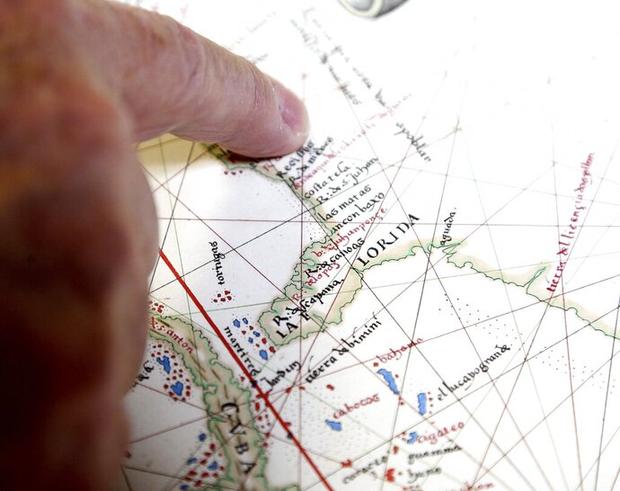 MacDougald’s evidence is compiled in his book, titled The Maps that Changed Florida’s History, to be released either later this year or early next year.

The research was born out of his work authoring another history book, The Pánfilo de Narváez Expedition of 1528: Highlights of the Expedition and Determination of the Landing Place, released in 2018.

In 1528, Pánfilo de Narváez led a failed attempt to colonize Florida for the Spanish government. Around 300 men began the journey but Native American attacks, starvation, disease and other natural causes killed all but four.

“It was a disaster,” MacDougald said.

His book further solidified the belief that the Narváez expedition began in Boca Ciego Bay, off the shore of what is now St. Petersburg.

“In my research, I noticed that they had gone to Safety Harbor and found European artifacts and many boxes from Castile,” the northwestern region of Spain where Ponce de León was born, MacDougald said. “I thought ‘Gee, nobody’s ever really proven where Ponce de León attempted his 1521 settlement.”

The Charlotte Harbor area has been fingered as the location because it is where Ponce de León landed during his first expedition to Florida in 1513. Historians figured he returned there during his second visit in 1521.

“It pre-dated the Jamestown colony and the Pilgrim landings by nearly a century, and the establishment of St. Augustine by a quarter of a century,” a historic marker in Charlotte Harbor reads. But it also says the “exact location” of the settlement is a mystery.

“There is really no evidence it was ever there,” MacDougald said. But perhaps Narváez found items in Safety Harbor that belonged to Ponce de León’s settlement.

The Tampa Bay History Center’s Rodney Kite Powell said the standing theory is that those items came from a Spanish shipwreck rather than a settlement. 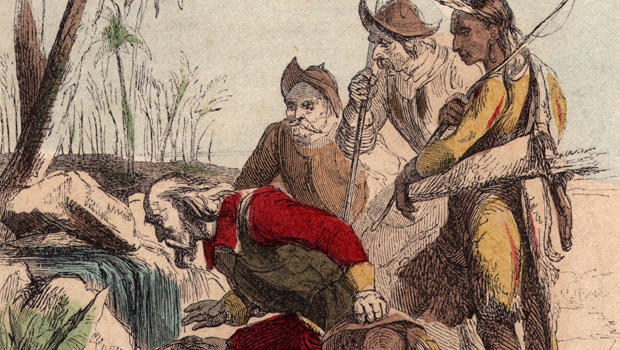 Jerald Milanich, curator emeritus at the Florida Museum of Natural History, has seen MacDougald’s full research and is intrigued by the possible link to Ponce de León.

“Were they left behind by Ponce?” Milanich said of the boxes. “They well could have been. That is something not considered before.”

MacDougald’s quest led him to rare reprints of two Spanish maps that predate the return of the four from the Narváez expedition.

Each can be founded folded into a rare mid-19th century history book published in Germany.

The maps are around 2×3 foot and “the whole Gulf of Mexico area is only 2×2 inches with teeny, teeny, teeny, teeny, teeny little writing spelling out 60 names in that area,” MacDougald said. “So, I had that section scanned and blown up. I then measured the longitude and latitudes.”

“Bahía de Juan Ponce is certainly Tampa Bay,” said Milanich, who had previously heard of the Bay of Juan Ponce via Spanish accounts of the expedition. He was taught it was near Charlotte Harbor.

MacDougald contends members of Ponce de León’s expedition charted the bay and named it for the explorer because that was where he was mortally wounded.

Perhaps no one previously noticed that bay’s name on that map because the technology needed to read the small letters did not exist until recent decades, MacDougald said, and the map is so rare that it might “have never been seen by Florida historians.”

The Tampa Bay History Center has approximately 5,000 maps of Florida, including “several” spanning the 1580s through the mid-1600s that reference a Bay of Juan Ponce, Kite-Powell said. Some of those maps place it near the location of present-day Tampa Bay. Others put it closer to Charlotte Harbor, Kite-Powell added.

But the History Center does not have the map that became the foundation of MacDougald’s thesis.

“That is a one-of-a-kind hand drawn manuscript map,” said Kite-Powell, who added he’d like to see all of MacDougald’s research before commenting further because he, like most historians, believes the most likely location of Ponce de León’s 1521 landing was near the Charlotte Harbor area.

“Tampa Bay and Charlotte Harbor are just slightly less than one degree of latitude apart, so they definitely fall within the margin of error of that era’s navigational tools,” he said. “I can’t wait to see the book.”

“The first thing to do when scouting for a place to settle is find a source of natural water,” Ehmann said. “Charlotte Harbor didn’t have a readily available spring back then, but Safety Harbor did. I never believed Ponce de León settled here. I believe any proof that leads to Safety Harbor.”

Further adding to that belief is that Ponce de León’s 1513 expedition to Charlotte Harbor was “violently repulsed” by the Calusa Tribe, MacDougald said. “Why would he bring a settlement expedition back there? Was he that stupid?”

What’s more, Milanich said, “Charlotte Harbor was not suitable for large Spanish ships to navigate, nor was the low terrain around the harbor a good place for a Spanish settlement.”

Of course, Ponce de León’s settlement did not last long regardless of where it was.

Months after arriving in 1521, the expedition was driven away by Native Americans, the Calusa Tribe if the settlement was in Charlotte Harbor and the Tocobaga Tribe if they were in in Safety Harbor.

Ponce de León was shot with a poisonous arrow and brought to Cuba, where he died.

“People came back to Spain and reported he was killed,” MacDougald said. “As a result, they named that place the Bay of Juan Ponce.”

“It points out the need for additional research on the 1521 Ponce expedition,” he said. “That will help us better understand the interactions between Florida Indians and the early European expeditions.”

Tricky language quiz puts your knowledge of English to the test