The Reserve Bank has held official interest rates steady at a record low while expressing concern about the economic fallout from the stage four lockdown of Melbourne.

Following its regular monthly meeting on Tuesday, the bank held the cash rate at 0.25 per cent, where it has been since late March. 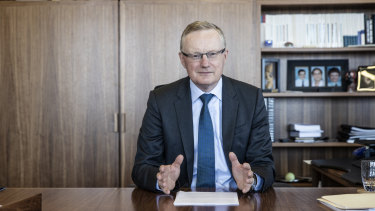 RBA governor Philip Lowe said the bank’s baseline scenario was that the Australian economy contracted by 6 per cent this year before growing by 5 per cent in 2021.Credit:Louie Douvis

RBA governor Philip Lowe said while the current downturn was not as severe as the bank originally feared, it was still going to be "uneven and bumpy", with the coronavirus outbreak in Victoria having a major impact.

He said the bank's baseline scenario was that the Australian economy contracted by 6 per cent this year before growing by 5 per cent in 2021.

Dr Lowe said the economy would enjoy a stronger recovery if progress was made controlling the coronavirus "in the near future". But failure to do so would see the recovery in the general economy and the jobs market delayed.

Dr Lowe also revealed the bank would buy government bonds on the secondary market on Wednesday in a bid to push down the interest rates on these, saying the bank would target the yield on three-year treasuries "until progress is being made towards the goals for full employment and inflation".

The governor said the federal government's decision to extend the JobKeeper wage subsidy scheme and JobSeeker unemployment payment was a "welcome development" that would support the economy.

"It is likely that fiscal and monetary stimulus will be required for some time given the outlook for the economy and the labour market," he said.

Markets had expected the RBA to hold rates, with the bank signalling it would not start lifting them until inflation approached its 2-3 per cent target range and the jobs market was strengthening.

Inflation data last week showed the largest fall in consumer prices since September 1931. Unemployment rose in June to 7.4 per cent, with Treasury expecting it to reach 9.25 per cent by year's end.

"However, there is concern that by extending the likes of the government's business stimulus packages, we are simply kicking the can down the road," he said.

"Once the likes of JobKeeper, JobSeeker, mortgage holidays and [bankruptcy] safe harbour do eventually come to an end, there will be a seismic shock to the economy as companies will have to either fend for themselves or admit defeat."

The decision came after the Australian Prudential Regulation Authority revealed 10 per cent of loans held by the nation's banks and credit unions were in temporary deferral.

As of the end of June, $274 billion in loans had been effectively suspended because of the pandemic and its impact on the ability of borrowers to repay their loans, APRA said.

Of housing loans, about 11 per cent, or $195 billion, were in deferral. But the rate was much higher among loans to small businesses, with $55 billion, or 17 per cent of those in deferral.

The authority noted that between May and June, the value of loans that moved out of deferral had increased to $18 billion, from $2 billion.