Prosecutors described the group’s repeated attacks on officers as they retreated toward the Capitol, and said members of the group wielded flagpoles, chemical spray, plastic handcuffs and tactical gloves with molded plastic knuckles.

Four of the five, who are all from central Florida, have been arrested, but the defendant facing the most serious allegations, Jonathan Pollock, 21, remains at large. Prosecutors said his family operates a gun shop in Lakeland, Florida, and documents indicate he attended the riot with at least two of his siblings.

Pollock’s coworker told the FBI that Pollock had taken several weeks off in January to go to D.C. with his family and returned to work bragging about having been on the news at the Capitol. The following day, he said he had a “family emergency,” left work and did not return.

In the 53-page affidavit unsealed Thursday, the government does not accuse the group of entering the Capitol building, but details how Pollock and four others allegedly charged past barriers and attacked numerous officers over the course of more than two hours. 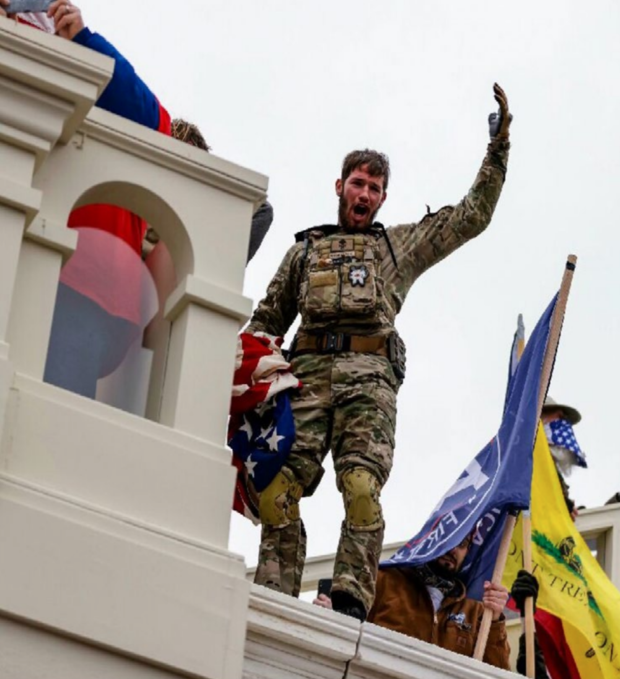 Prosecutors say Jonathan Pollock — dressed in a camouflage suit with knee pads, a ballistic vest and gloves with plastic knuckles — brandishes a flag pole as he charges toward a line of police. He’s joined by another unnamed person, who the Justice Department said was his younger brother, though he is listed in the indictment only as “Associate 2,” who also carries a flagpole as he rushes toward the police.

According to the affidavit, officers wrestle the poles away from the men, but Jonathan Pollock charges at a metal barricade, screaming, “Let’s go!”

Pollock is assisted by another defendant, Joseph Hutchinson III, 25, who prosecutors said works at the Pollock family gun shop. Hutchinson and others in the crowd grab the barricade and pull it back, which allows rioters to access the police line.

Pollock then jumps over other rioters in order to reach police, prosecutors said, and ultimately assaults three officers in quick succession: He pulls one officer down a set of steps, knees and punches another in the face, then pivots and punches a third officer in the face and pushes that officer to the ground by holding and choking the officer’s neck. 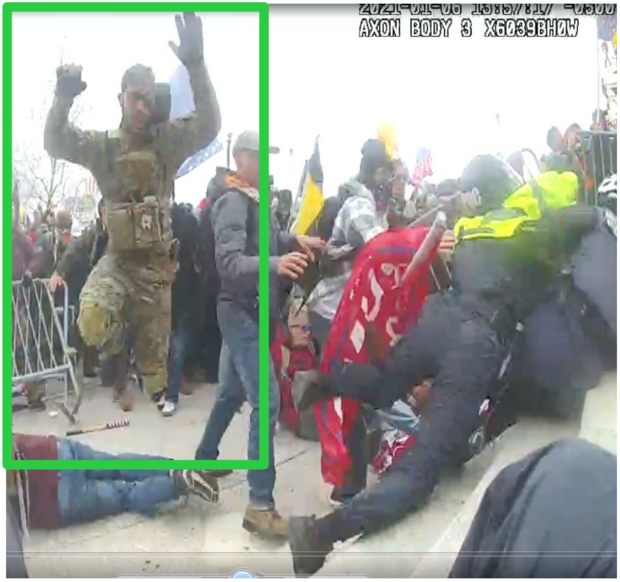 By now, rioters have overrun metal barriers that had been holding them back, which leaves the crowd held back by only a line of police officers with riot shields.

According to the affidavit, Hutchinson charges the line of police officers, squares off in a “fighting stance” and begins punching at officers’ faces.

Around the same time, Jonathan Pollock runs toward officers and grabs an officer’s riot shield. The affidavit says they engage in a “tug-o-war” until Pollock pulls the officer down the steps and breaks his grasp.

Jonathan Pollock holds the riot shield in front of himself and charges up the steps, slamming into the police line. Joshua Doolin, 22, carries a flagpole on his shoulder and advances up the steps, pointing the pole at officers before he is turned back by chemical spray. 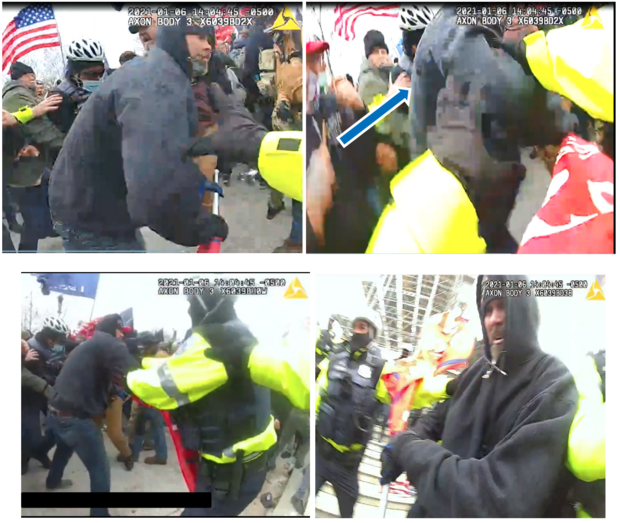 Jonathan Pollock allegedly grapples with an officer, hitting the officer while another rioter swung at the officer with a flagpole.

Prosecutors said Hutchinson then kicks at the line of police officers, and Jonathan Pollock wrestles away a police riot shield. He uses the bottom edge to thrust into an officer’s throat or face, prosecutors said, before he jabs it toward another officer. 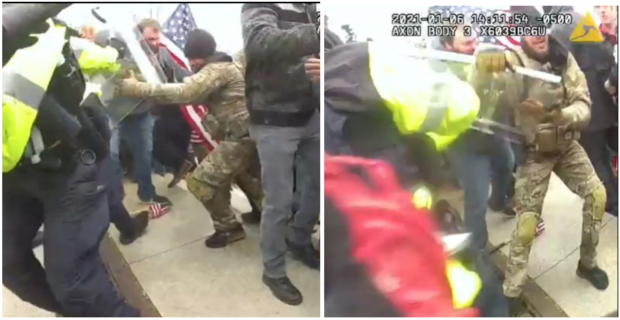 Police officers begin moving down the steps on the west side of the Capitol, pushing rioters back.

Hutchinson allegedly steps forward and punches an officer who has stumbled, then grabs another officer’s jacket sleeve and throws the officer out of his way.

Olivia Pollock, 30, who a witness said was Jonathan Pollock’s sister, trails behind Hutchinson carrying a flagpole with an American flag. She attempts to take an officer’s baton, but is knocked back. She raises her hands in a fighting posture and elbows the officer in the chest, again trying to steal the baton, prosecutors said. 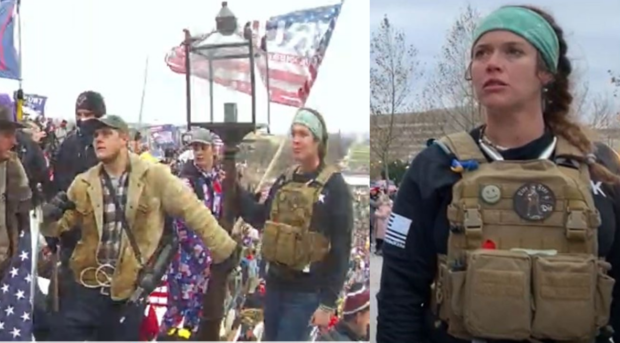 Jonathan and Olivia Pollock, Doolin and Perkins stand on the ledge of the Upper West Terrace of the Capitol, while police officers are stationed on bleachers.

Doolin can be seen in body-worn camera footage with zip-tie handcuffs tucked in his belt and a riot-control chemical canister, which “appears to belong to law enforcement,” the affidavit said, slung over his shoulder. 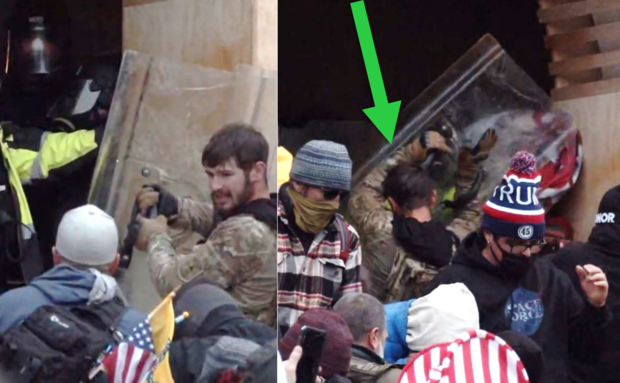 At this point, the affidavit says Jonathan Pollock and Doolin have relocated to an area in the Lower West Terrace, near an entrance to the U.S. Capitol building. Another rioter passes Pollock a Capitol Police riot shield, and he stations himself at the entrance to the tunnel.

As other rioters yell for help for a person in the crowd who is unconscious, Jonathan Pollock picks up an additional Capitol Police riot shield and gives it to another rioter. 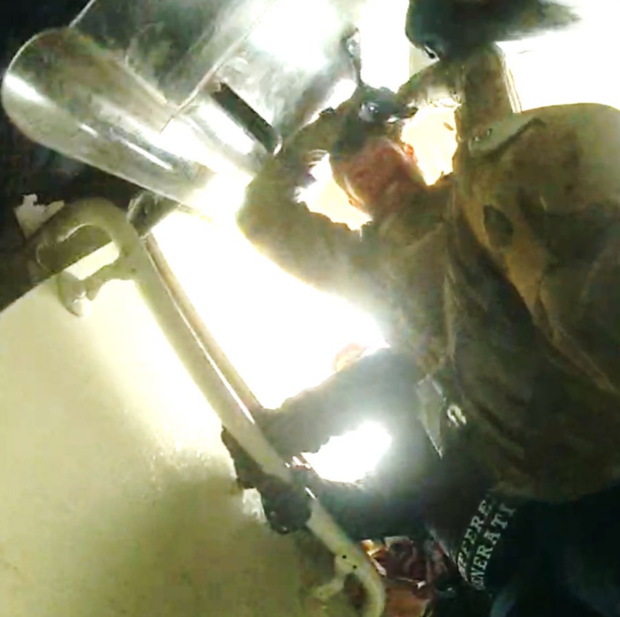 As other rioters thrust and throw poles and other projectiles at officers, Jonathan Pollock allegedly slams and pushes the riot shield into the line of officers. According to the affidavit, he pins the officers’ shields, which blocks them from protecting themselves.

Pollock remained positioned at the tunnel entrance until at least 4:46 p.m., prosecutors said, preventing officers from advancing out of the tunnel.