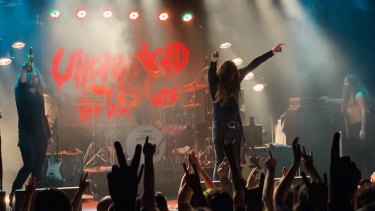 Uncle Acid and the Deadbeats at the close of their Melbourne show at Max Watts on March 3.Credit:Martin Boulton

The cult of Uncle Acid has clearly expanded since then, having sold out this Tuesday might performance when you might think most folks would be saving their cash for the upcoming weekend's Golden Plains festival, also held in the Meredith Supernatural Amphitheatre.

However, here we all were with Melbourne's Child warming up the joint in fine style for the UK four-piece, led by Kevin Starrs on vocals and lead guitar. Starrs' face, like the other band members, is shrouded most of the time by long hair. It's just one of many late `60s, early 1970s heavy metal tropes the band display, along with black clothing head-to-toe and vintage guitars and amps to help replicate the early Black Sabbath sound their own songs are largely built upon.

Mind Crawler, from their 2013 album of the same name, hooked into the deep, heavy groove Uncle Acid have been mining since Starrs first assembled the band, which now has Vaughan Stokes sharing guitar duties, the stunningly hirsute Justin Smith on bass and Jon Rice pounding the hell out of his drums.

Crystal Spiders was among the highlights in a set that barely took a backward step for close to 90 minutes, including a one song encore that fans demanded and briefly felt wasn't coming. It did, to a mighty roar. No Return, from last year's excellent Wasteland album, was another standout in a set that included the ear-shattering heaviness of I'll Cut You Down and a cracking version of Death's Door, both from 2011's Bloodlust album.

Splattered behind Rice's flailing arms throughout was a constant stream of kitsch images and grainy cinematic grabs; depicting wild bikie gangs, religious icons and all manner of moral looseness and depravity, in keeping with the cult-like atmosphere the band project. The packed room – almost all of them decked out in black, like those on stage – nodded along in agreement with the thunderous beats, howling vocals and the general sense of escape that Starrs and his buddies brought to the darkened stage.

Hilaria Baldwin Shares Sweet Photo of Daughter Carmen, 7½, and Newborn Lucia: 'We Are a Good Team'

IOC is increasingly confident there will be fans at 2021 Tokyo Olympics, Thomas Bach says