Spending cuts will form part of this month’s federal budget, Prime Minister Anthony Albanese has confirmed, as the government comes under pressure to reduce expenditure to ease inflationary pressures across the economy.

Albanese said “risky” spending cuts would form a part of the October 25 budget that Treasurer Jim Chalmers admitted this week could be tweaked depending on the changing forecasts to the global economic outlook. 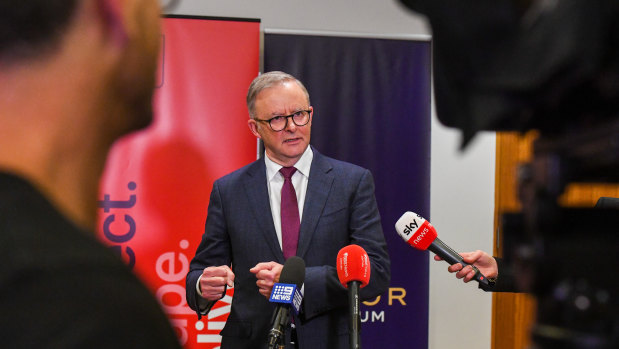 Chalmers overnight arrived in Washington for the annual meeting of the World Bank and International Monetary Fund which is warning the world is on the cusp of a recession caused in part by the aggressive increases in interest rates from central banks aimed at bringing down high inflation rates.

The IMF, in a report on government budgets released overnight, urged politicians to trim public spending, saying they should be working in tandem with central banks to bring down inflation.

The prime minister said spending cuts would be a part of the budget as they would help take some inflation risks out of the economy.

“Any cut is a risky decision and there will be spending cuts in the budget. It will be a responsible budget. As we’ve consistently said, we’ve gone through line by line,” he said.

“What you don’t need at this time is monetary policy and fiscal policy working against each other. And that’s why in the inflationary period … we’ve seen the fastest synchronised tightening of monetary policy that we’ve seeing from central banks in decades. And that, of course, is a response to those international circumstances and the Australian government has to respond to that as well in a way that’s consistent.”

Labor went to the election promising various spending cuts worth a combined $1.3 billion in the 22-23 financial year. The largest, a $500 million saving this financial year, was to come from a reduction in the use of external consultants.

But other savings are expected, particularly around infrastructure and regional programs. The timing of certain infrastructure projects is likely to be changed as the government seeks to prevent a sudden slump in spending in coming years while the first stage of its audit of “waste and rorts” will be unveiled on budget night.

The IMF report stressed the importance of government budget restraint in tackling inflation.

“Fiscal consolidation sends a powerful signal that policymakers are aligned in their fight against inflation, which, in turn, would reduce the size of required policy rate increases to keep inflation expectations anchored and keep debt servicing costs lower than otherwise,” it said.

“While politically difficult, gradual and steady fiscal tightening is less disruptive than an abrupt fiscal pullback brought on by loss of market confidence. Prioritising policies and programs is increasingly vital as governments operate within tighter budgets.”

The fund earlier this week downgraded its forecasts for the global economy. It believes four in 10 economies would suffer a recession over the next months, while tipping the Australian economy to grow by 1.9 per cent through 2023.

The fund expects Australia’s structural budget deficit to gradually narrow to around 0.7 per cent of GDP by 2027. The structural deficit, which removes one-off gains such as unusually high commodity prices, was 1.1 per cent of GDP before the start of the COVID pandemic.

According to the IMF, the amount of debt taken on by governments to deal with COVID has left them exposed to a sharp rise in interest rates on government debt.

Australia is not immune to those higher rates, with another spike in borrowing costs occurring this week.

Shadow treasurer Angus Taylor said the Australian economy and the budget were in a strong position at present, due in part to an “extraordinary” recovery from the pandemic.

He said the government needed to deliver a responsible budget.

“What we need is a responsible budget. We don’t need the government putting forward policies that force the Reserve Bank to push interest rates up further,” he said.

Who is Spain vs Sweden referee Slavko Vincic? Euro 2020 ref released without charge after drugs and prostitution raid