A sales assistant has told of the ‘explosive sex’ she has enjoyed with multiple married men in breach of lockdown.

At the beginning of the month, an amendment to the Health Protection Bill was released amid the pandemic, stating: ‘No person may participate in a gathering which takes place in a public or private place indoors, and consists of two or more persons.’

Yesterday, the rules were eased slightly to allow adults who live alone to chose one other single-person household they can ‘bubble’ with – where they can visit and stay overnight.

But Claire, 32, from Liverpool, (who has changed her name) has admitted she’s already had sex with two men at her flat because she is ‘isolating at home and craved human contact’.

The furloughed worker revealed both affairs – a financier and an investor who is isolating separately from his wife – are married men she has met online, and argued that they don’t feel guilty because ‘neither are showing symptoms’. 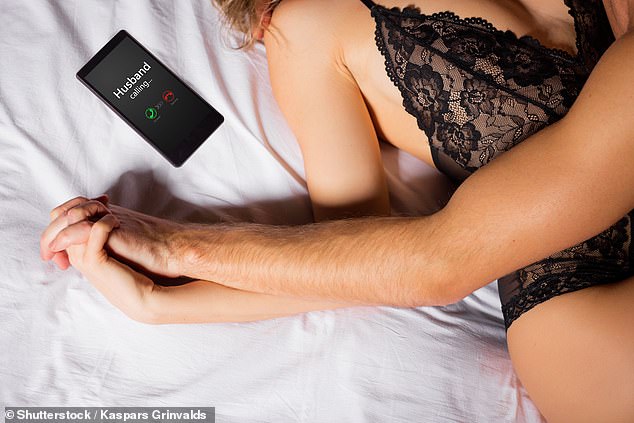 A sales assistant has told of the ‘explosive sex’ she has enjoyed with multiple married men in breach of lockdown, slamming the rule as ‘crazy’ and arguing that it is ‘impossible’ for young people to stick to it

Divorcee Claire revealed she had sex the first time in breach of lockdown in April – with a married man she had met on IllicitEncounters.com, the UK’s leading affairs site, just before the restrictions came into place.

Recalling how it started, she said: ‘We had sex a few times before the clampdown.

‘We stuck to the rules for about a month and just Facetimed each other – putting on little sex shows to keep the spark alive.

‘After a month, we could wait no longer and he came to my flat for an afternoon of fun.’

And she says it was worth the risk, adding: ‘We had sex three times. It was explosive because it had been so long for both of us. We were doing all over my flat. I could not wait to do it again.’

Speaking about her first affair, she said: ‘He is in his 30s, too, and works in finance. He is married but has a much higher sex drive than his wife.

‘We see each other every couple of weeks at my flat and always have sex. Neither of us feels bad about breaking the rules because we are young and fit and are showing no symptoms.’

Claire continued: ‘I would do it again – it is crazy that the Government is banning people from having sex.

‘The fact is that most young people outside of high risk groups have a very small chance of getting seriously ill from Covid.

‘We are being asked to go without sex for the whole of the summer to avoid a nasty bout of flu. It is a ban that most young people just cannot stick to.

‘I know that the restrictions are in place to stop us from infecting other people but I cannot live in a cocoon forever.

‘I live in a flat on my own and I need human contact. I am not just going to spend the rest of the summer on my own. I have a high sex drive and need physical contact’, she reasoned.

Claire, who split with her husband two years ago, has also started a new relationship with a second married man she met online.

She said: ‘He invests in various businesses and has separated from his wife during lockdown.

‘He contacted me for the first time about a month ago and we had sex at my flat last week after I cooked him dinner. Again the sex was amazing.’

Claire was speaking as a new survey found that more than half of Britons oppose the summer sex ban.

The number of people who have had sex in breach of the lockdown has doubled in the last month.

Only a fifth had breached the rules by the end of April, but this figure has risen to 42 per cent in the wake of the controversy over Government adviser Dominic Cummings.

The results are from a new survey of 2,000 people by the affairs website.

It showed that two-thirds of respondents said that the ban needed changing because it applies to all ages and there are no exemptions for younger people.

Three-quarters of those surveyed said the policy was unworkable in the long-term because ‘the Government cannot ban people from having sex.’

The poll showed a big rise in lockdown breaches. More than half of those under 30 said they had had sex in breach of the rules since the lockdown came into place.

IllicitEncounters.com sex and relationship expert Jessica Leoni said: ‘The Government are mad if they think they can stop people having sex.

‘We all know the risks from Covid now and people are smart enough to weigh them up and gauge whether they want to spend the rest of the summer without any kind of physical comfort.

‘It is bonkers that couples who were seeing each other before lockdown cannot even kiss each other under the rules, let alone have sex. Who is going to stick to that?

‘The rules are particularly tough on single people who live on their own like Claire who are expected to live for months on end without any physical comfort.

‘There are thousands of Claires out there who have looked at the facts and decided to break the rules because the health risk to them is so small.’