Celestial seabass, anyone? Astronauts could farm fish on the MOON using eggs transported from Earth and water already on the lunar surface, experts claim

Astronauts could grow fish on the Moon using eggs transported from Earth and water that’s on the lunar surface, scientists claim.

As part of a project called Lunar Hatch, experts are simulating the impact of the vibrations caused by a rocket launch on fertilised fish eggs.

Fish eggs could feasibly be transported to the Moon to set up a fish farm to help feed the lunar astronauts in the next couple of decades.

Rearing fish on the Moon would provide astronauts with ‘essential amino acids, omega-3 polyunsaturated fatty acids and vitamin B12’ – and an alternative to unappetising freeze-dried products.

NASA has committed to sending a man and woman to the moon again by 2024, while the European Space Agency (ESA) plans to build a moon village by 2030. 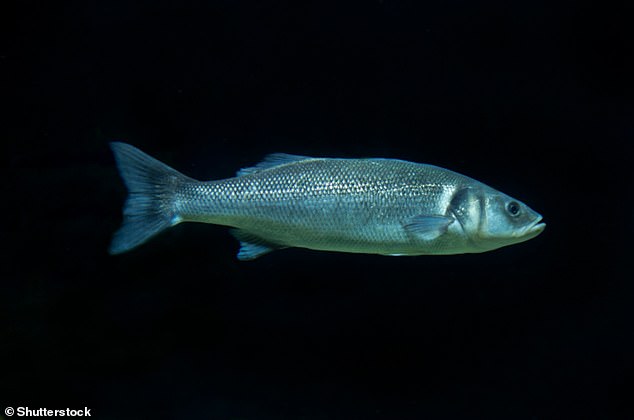 Pictured, the European bass (Dicentrarchus labrax). The Lunar Hatch programme’s goal is to fertilize farmed fish eggs on Earth that would hatch upon arrival at the lunar base

Astronauts on the ISS eat three meals a day – breakfast, lunch and dinner.

They can choose from many types of foods such as chicken, beef, seafood, fruits, nuts and candy.

Condiments, such as ketchup, mustard and mayonnaise, are provided.

Salt and pepper are available but only in a liquid form because astronauts can’t sprinkle salt and pepper on their food in space.

Preparation varies with the food type. Some foods can be eaten in their natural forms, such as brownies and fruit. Other foods require adding water, such as macaroni and cheese or spaghetti.

An oven is provided in the space station to heat foods to the proper temperature, although there are no refrigerators.

Along with California State University Maritime Academy, IFREMER plans to launch a nanosatellite containing fertilised fish eggs directly from the International Space Station (ISS) sometime this year in advance of these missions.

‘I proposed the idea to send eggs, not fish, because eggs and embryos are very strong,’ study author Cyrille Przybyla, from the French Research Institute for Exploitation of the Sea (IFREMER), told Hakai Magazine.

Przybyla and his colleagues say food autonomy represents ‘an essential challenge’ for the future ‘Moon Village’ planned by the ESA.

ESA believes that structures for astronauts to live in on the lunar surface will start being built within the decade.

Part of the new mission will involve building a sustainable colony on the moon, where engineers can learn how to use lunar resources.

NASA confirmed last October that there is water on the sunlit surface of the Moon, indicating that it is easily accessible and not just in the deep, permanently shadowed craters of the south pole, as previously thought.

Przybyla believes a fish farm that uses lunar water sources can help feed residents of the Moon Village when it’s built, complementing a diet of vegetables and possibly grains.

Fish eggs would initially be spawned on Earth and then transported to the Moon, where they would become the first in a line of lunar fish.

But getting the eggs unscathed to the Moon is one of the biggest challenges.

‘The Lunar Hatch programme’s goal is to fertilise farmed fish eggs on Earth that would hatch upon arrival at the lunar base,’ Przybyla and his colleagues say.

‘However, the vibrations from a spacecraft’s launch are an unusual situation for fish eggs and may have a negative impact on them.’ 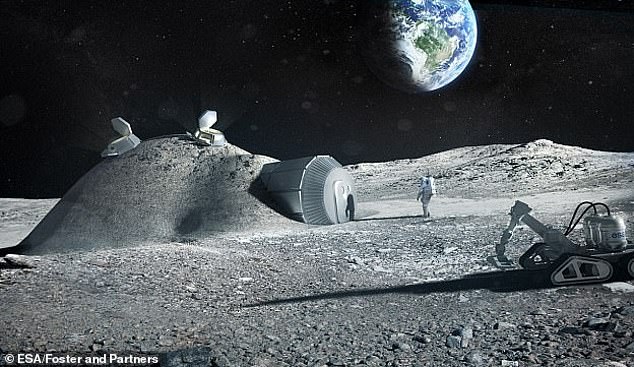 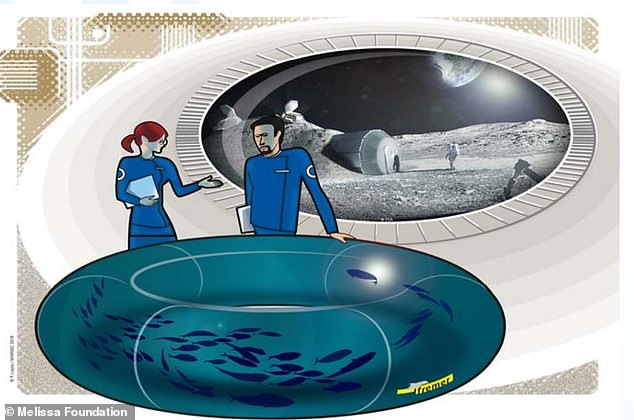 Artist’s impression of astronauts in their fish farm on the lunar surface. By the end of 2021, IFREMER and CSUM plan to launch a nanosatellite containing fertilised fish eggs directly from the International Space Station (ISS)

Shaken eggs were then compared with an unshaken control batch.

Results for the seabass eggs were nearly as promising – 76 per cent later hatched,  slightly less than the 82 per cent success rate for the control seabass eggs.

‘It was completely crazy – the environment was very hard for these eggs,’ said Przybyla, who has published a paper detailing the experiments in Aquaculture International.

Potentially other fish species with similar incubation periods – somewhere between four and six days – seem to be good candidates to surviving a spacecraft launch.

It’s possible that both species have evolved to withstand strong currents, waves, and collisions with hard surfaces – and their eggs are ‘naturally space-ready’.

Psychological well-being of astronauts during long space missions would be improved by the presence of living animal species – even fish eggs, according to Przybyla.

Przybyla admitted that exposure to cosmic radiation during the trip to the Moon could induce some physiological damage.

‘However, materials have already been developed to reduce this impact on human cells and DNA, and the fish should benefit from the use of similar materials,’ he previously told The Fish Site.

Water can also mitigate the effects of charged particles, the most hazardous element of cosmic radiation.

According to the ESA, astronauts are likely to live in pressurised, mobile habitats for the first few years of missions to the Moon.

A more permanent base would be near the Shackleton crater – at the moon’s south pole where there is near constant sunlight – so solar panels could provide power.

The crater contains ice that could be mined to provide water or hydrogen and oxygen for breathable air and fuel.

Jan Wörner, Director General of the European Space Agency, said last year: ‘My intention is to build up a permanent base station on the Moon.

Artemis was the twin sister of Apollo and goddess of the Moon in Greek mythology.

NASA has chosen her to personify its path back to the Moon, which will see astronauts return to the lunar surface by 2024 –  including the first woman and the next man.

Artemis 1, formerly Exploration Mission-1, is the first in a series of increasingly complex missions that will enable human exploration to the Moon and Mars.

Artemis 1 will be an uncrewed flight that will provide a foundation for human deep space exploration, and demonstrate our commitment and capability to extend human existence to the Moon and beyond.

During this flight, the spacecraft will launch on the most powerful rocket in the world and fly farther than any spacecraft built for humans has ever flown.

Artemis 1, formerly Exploration Mission-1, is the first in a series of increasingly complex missions that will enable human exploration to the Moon and Mars. This graphic explains the various stages of the mission

Orion will stay in space longer than any ship for astronauts has done without docking to a space station and return home faster and hotter than ever before.

With this first exploration mission, NASA is leading the next steps of human exploration into deep space where astronauts will build and begin testing the systems near the Moon needed for lunar surface missions and exploration to other destinations farther from Earth, including Mars.

The will take crew on a different trajectory and test Orion’s critical systems with humans aboard.

Together, Orion, SLS and the ground systems at Kennedy will be able to meet the most challenging crew and cargo mission needs in deep space.

Eventually NASA seeks to establish a sustainable human presence on the Moon by 2028 as a result of the Artemis mission.