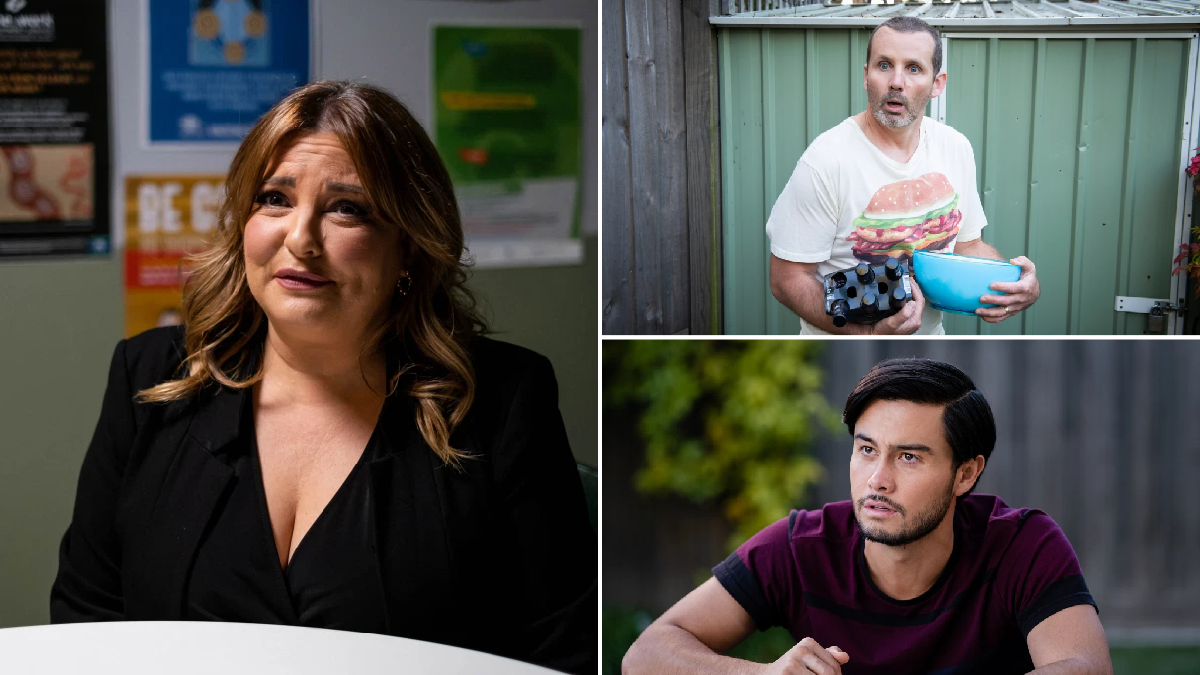 There is a bucket load of upset about to hit the Ramsay Street residents when confessions hit the air, someone’s hellbent on revenge, and a sabotage plot is set to rip a couple apart in Neighbours.

Rose (Lucy Durack) returned to Erinsborough for the sole purpose of winning Toadie (Ryan Moloney) back, and she’s not leaving without him. His girlfriend Melanie (Lucinda Cowden) is a bit of an obstacle, but that won’t stop Rose. She wants Toadie, and she’ll stop at nothing to get him.

David (Takaya Honda) is about to come across some information he’ll wish he never learned when Paul (Stefan Dennis) reveals the truth behind Nicolette’s (Charlotte Chimes) disappearance. Will David reveal all to Aaron (Matt Wilson)?

Harlow (Jemma Donovan) is about to suffer a very painful fall from grace when Chloe (April Rose Pengilly) works to get her demoted. Harlow does not take kindly to this, and her thoughts immediately turn to revenge. What will she to do Chloe?

Elsewhere, Chloe is heartbroken by a package she receives in the post, and Terese (Rebekah Elmaloglou) makes a huge faux pas.

Here’s what’s ahead in Neighbours.

Toadie lets himself get carried away and in a heated moment, kisses Rose. Now he’s tormented – who does he want to be with? While he’s conflicted, Rose is satisfied – this is what she wanted. She confesses she is back in Erinsborough for him and wants him back. Toadie is disgusted with himself for his behaviour and tries to absolve himself of his crime by coming clean to Mel. Melanie is distraught and tells him where to go, while he remains conflicted over what he really wants. Rose, on the other hand, is miffed that Toadie doesn’t come running to her, so she sets up a plan to ruin Toadie’s relationship once and for all – she organises a secret meeting for Mel and her ex Justin, then orchestrates it so that Toadie discovers them together. Will her dirty little plan work?

David is tormented over Paul’s attempt to bring him in on keeping the loan secret from Terese. He clearly doesn’t know the full truth and he’s starting to twig that there’s more to the story. His suspicions are piqued when he hears Paul talk about selling the Tram and ditching his nosy accountant. Having had enough, David confronts Paul. With nowhere to go with the lie, Paul confesses – he paid Nicolette to stay away. David’s immediate instinct is to tell Aaron, but Paul convinces him otherwise. Will David put his marriage on the line to protect Paul?

Emotional confrontation for Jane and Chloe

Chloe is stunned to receive a package addressed to Nicolette, and she turns to Jane for support to open it. It’s more confronting than either of them expects; it turns out to be the engagement ring Nicolette ordered for Chloe. Chloe feels her loss deeply, so she and Jane come up with a plan to ease their pain – they arrange for the ring to be placed in Isla’s room as a token of her missing mother’s love. Little do they know, Nic isn’t even her mother.

Word gets back to Terese that staff are striking over Harlow’s promotion and it’s Jesse who’s there to support her. She’s touched and wants to let him know how much she cares, but accidentally makes a slip up in the process, saying something she truly regrets. She’s embarrassed and tries to cover her faux pas, but when Paul hears about it, he confronts her. She does her best to reassure him – she just wants to guide Jesse as a vulnerable kid, nothing more. When Jesse is left wondering whether to visit his mum Julie in jail, Terese supports him when he decides not to. Paul is worried his wife is letting her feelings get in the way of the issue with the Quills. Is the past coming back to get her?

Amy decides Levi’s mum needs winning over and feels she is the woman to do it. This could mean Levi losing his mum from his life for good, the stakes are seriously high. But Amy goes for it nonetheless, orchestrating time alone with Evelyn. She takes a very mature approach, which Evelyn appreciates, and she comes to respect the new woman in her son’s life. They have a D&M and all seems to be going well, but is it enough to get Evelyn to accept Levi’s new relationship?

Harlow has revenge in mind

Harlow’s promotion has not gone down well with other staff who haven’t been given a leg up through nepotism. There is a mutiny swelling amongst the ranks, spurred on by their loathing of Harlow’s approach. She’s heavy-handed and clearly lacks managerial experience. Chloe goes to HR in a bid to get Harlow unseated, and the manager suggests Paul rethink Harlow’s new role. But he’s a stubborn old mule, Harlow is staying where she is.

When Terese gets wind of this she’s furious, especially when she gets wind of a strike. Terese steps in and takes Harlow’s new position from her, leaving Harlow learning a tough life lesson and not liking it one bit. She holds Chloe fully responsible and has plans to get her back.