THOUSANDS of SSE customers have complained of waking up this morning to "frightening" energy bills of up to £42,000.

Households noticed that thousands of pounds had been added to their smart meters despite not increasing their energy consumption. 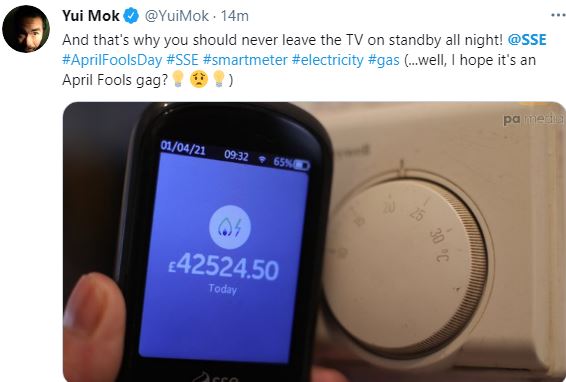 Te energy giant has apologised for the fault, which it says it affecting some Smart Energy Trackers and In Home Displays.

Confused bill payers have even accused the SSE of making a "bad taste" April Fool's gag.

"If this is an April Fool hack please sack the perpetrator immediately. Frightening people is not funny." 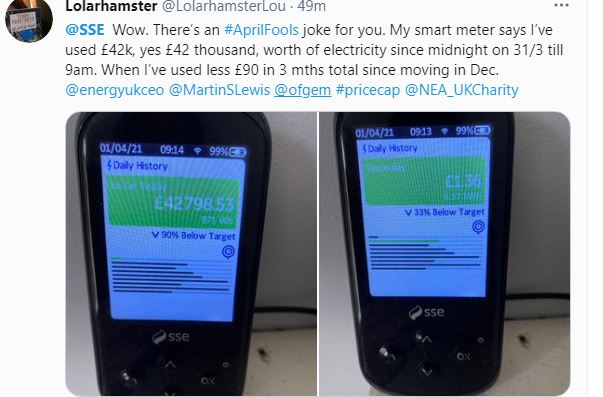 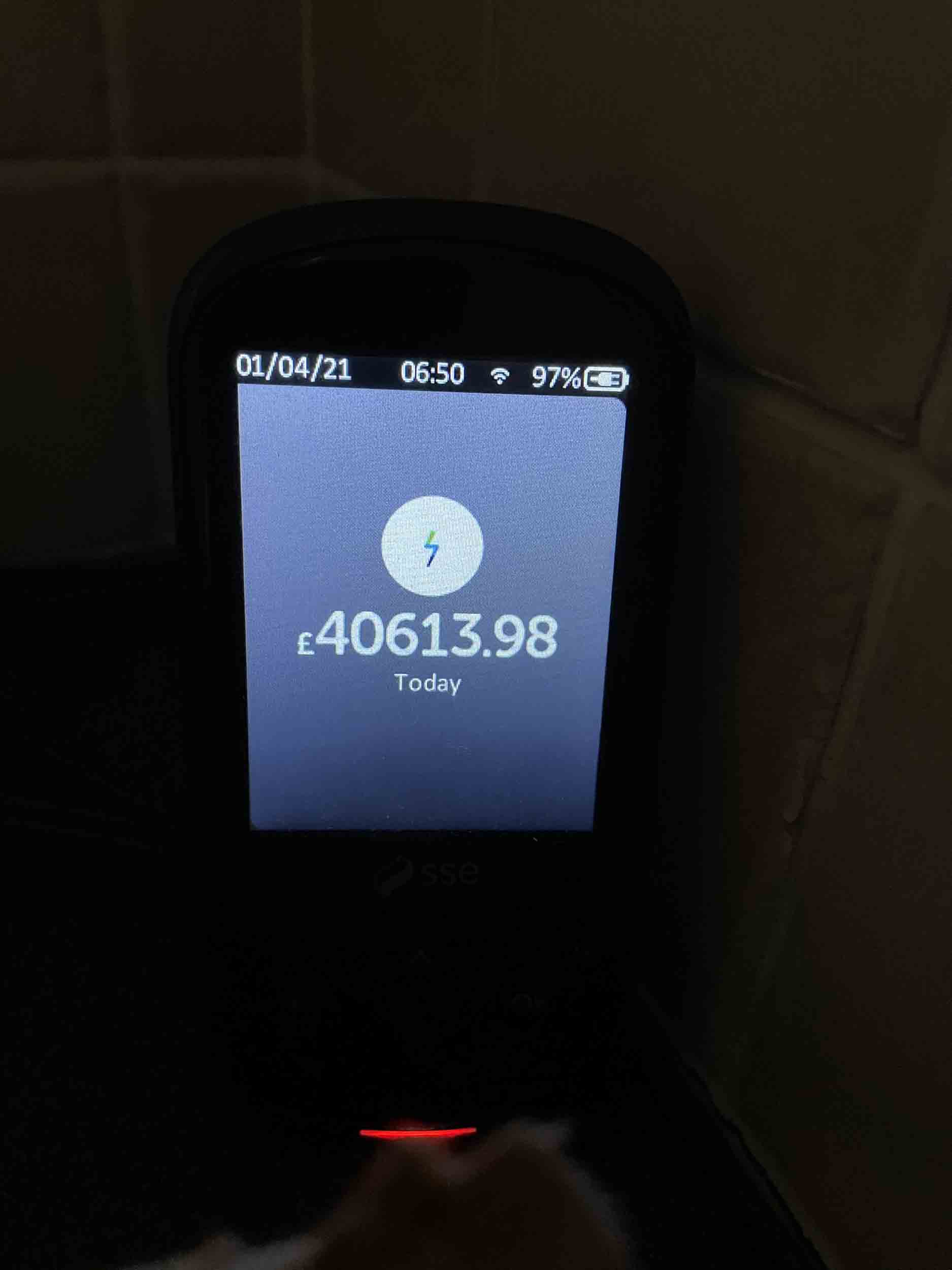 Later, she added: "I am furious. There will be vulnerable people terrified by this. If any one of them come to harm I will hold SSE corporately responsible."

Another customer said that if it was an April Fools day joke, then the provider had "taken it too far".

One person posted a photo of their smart meter to the social media site which clocked he'd used £42,081.03 worth of energy by 10am.

"Please tell me this is an April Fools joke?" they said. 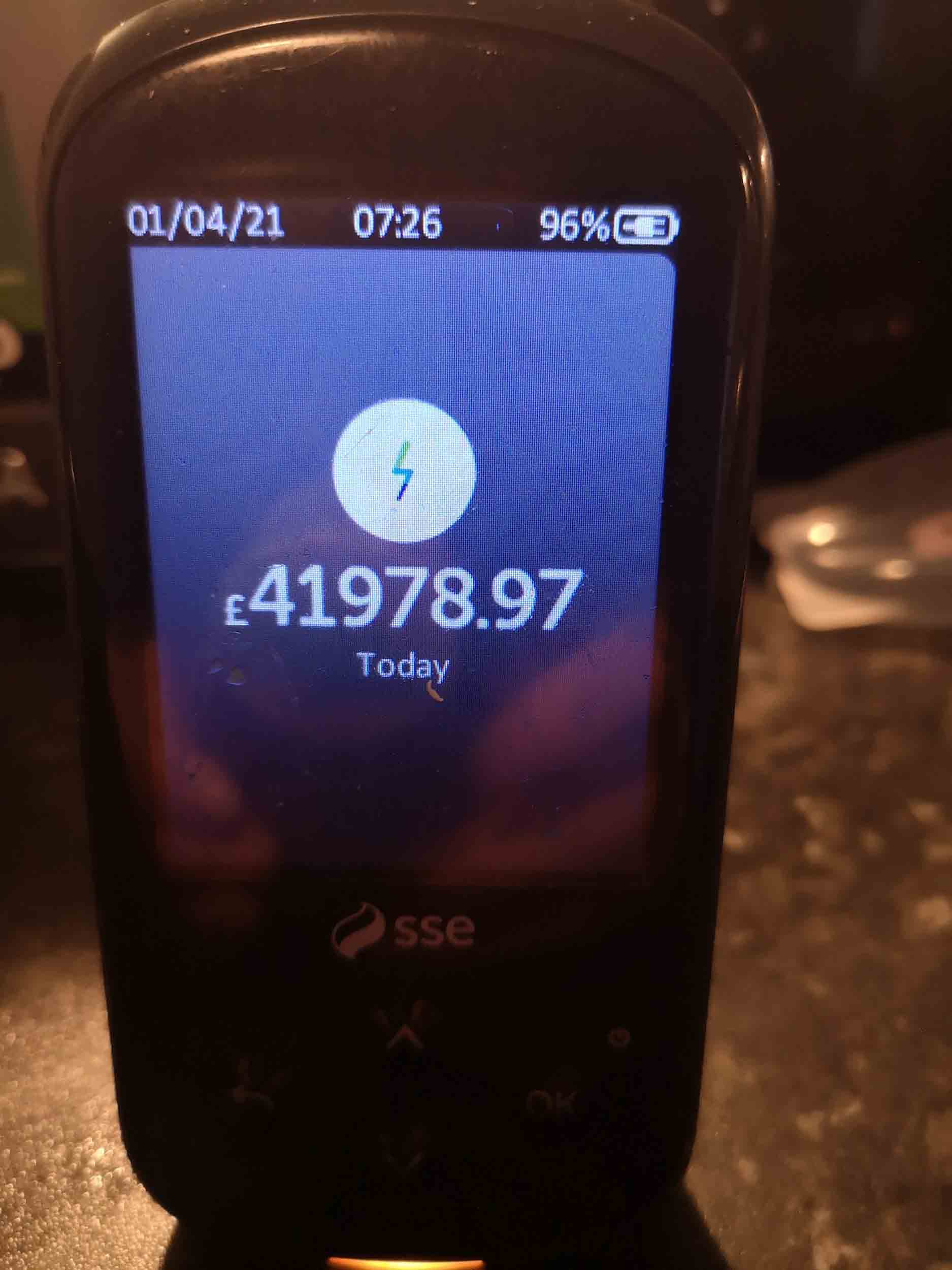 SSE is among the energy suppliers that has hiked bills for households on standard variable tariffs in line with Ofgem's price cap from today.

It led one customer to ask the company whether the huge £42,261.94 bill displayed on his smart meter was a result of the price hike.

"Can you confirm if my #sse #smartmetre is playing an hilarious #AprilFoolsDay joke on me; or if this IS actually a result of your #pricerise that starts today?" they wrote.

SSE was sold to Ovo energy in 2019, with all 3.5million customers transferred to the new supplier by the start of 2020.

An SSE spokesperson told The Sun: "We’re aware of a fault on some of our Smart Energy Trackers and In Home Displays that’s causing them to show incorrect costs.

"We’re sorry and are working hard to resolve this. Customers do not need to do anything at this time."

Around 15million households will see their energy bills rise by up to £96 from today – but you might be able to save as much as £280 by switching.

It's not just energy that's getting more expensive this week – we round up eight bills that are going up in price.

Here are 19 new laws and financial changes coming into force in April.

Michael Jackson Paul McCartney friendship: How did MJ and Sir Paul fall out?

Influencer spends £2,600 to look glamorous for her cesarean