Australia’s two most populous states are divided over whether to reduce the nation’s week-long COVID isolation period, with NSW Premier Dominic Perrottet leading the charge to wind back the days people must stay at home, while Victorian Premier Daniel Andrews remains cautious about any change.

Health Services Union national president Gerard Hayes called for Australia to follow the UK model, saying that mandatory isolation should be scrapped entirely and workers trusted to stay home if sick, arguing for “personal responsibility and community respect” to underpin the rules as workers struggled to make ends meet.

“Whether it’s COVID, measles, chicken pox or the flu, you take the appropriate steps,” Hayes said. 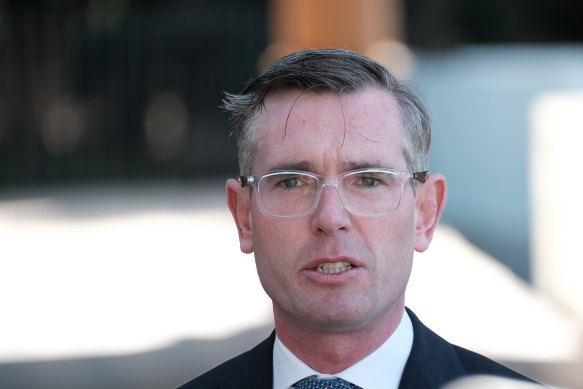 NSW Premier Dominic Perrottet: “We have to get to a point where if you are sick you stay at home and if you are not sick, you can go to work.”Credit:Oscar Colman

Albanese on Monday signalled an end to mandatory isolation may be on the horizon, saying national cabinet was “looking at as well in the longer term about what the nature of restrictions are”, noting that daily case numbers were falling.

Commonwealth support payments for workers who have to isolate with COVID-19 but do not have sick leave are due to expire on September 30.

Perrottet has been pushing for a reduction in the isolation period since last December, but has told reporters he believes “national harmony” is needed as the compulsory stay-at-home orders are wound back.

He has said that: “We have to get to a point where if you are sick you stay at home and if you are not sick, you can go to work.“ 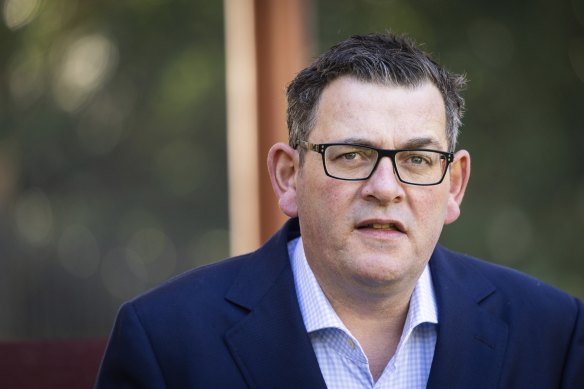 Victorian Premier Daniel Andrews: “I would not want to do anything that made the job of our health professionals harder.”Credit:Paul Jeffers

Hayes said hospital staff shortages had been exacerbated by the need to furlough workers and that many were “looking at how they support their families”.

A source familiar with the discussions between states, who spoke on condition of anonymity, said if the mandatory isolation period was slashed to five days on Wednesday, this may not apply to hospital and aged care workers.

Albanese said national cabinet would decide on a consensus approach.

Andrews said last week that he “would not want to do anything that made the job of our health professionals harder” and that the states’ chief medical officers “were going to go away and do the work on this” and report to national cabinet.

A spokesperson for Perrottet said a consistent national approach was needed “to give the community certainty as we move through the next phase of the pandemic.”

“This is a matter we need to look at closely given COVID will be with us for the foreseeable future,” the spokesman said.

NSW Health Minister Brad Hazzard said while the state’s hospitals were still grappling with COVID-19, “the number of staff furloughed has dropped dramatically in recent weeks”.

State officials who spoke anonymously to The Sydney Morning Herald and The Age so they could discuss the views of their respective leaders indicated that some leaders were more keen to cut the isolation period to five days than others.

Victorian, Queensland and Tasmanian officials emphasised the importance of not cutting the isolation period unless the Australian Health Protection Principal Committee made a clear recommendation to do so.

ACT Chief Minster Andrew Barr said he would support a five-day isolation if it was backed by the committee, while a spokesman said South Australian Premier Peter Malinauskas “is open-minded to this change, subject to the health advice”.

Tasmanian Premier Jeremy Rockliff said the state would follow the public health advice and Northern Territory Chief Minister Natasha Fyles said she was “conscious on the impact COVID is having on our workforce”.

A spokeswoman for the Western Australian government said the state wanted to maintain “a nationally consistent approach to testing and isolation protocols” and that any changes “must be based on expert health advice”.

“We’ve got to make sure that this doesn’t get away [from] us again,” Westacott said.

Australian Chamber of Commerce and Industry chief executive Andrew McKellar said he was not pushing for a reduction of the isolation period, despite the “compounding” impact on labour shortages.

University of Melbourne Professor James McCaw said isolation was “a critical element of reducing transmission” and that scrapping or reducing the period would drive up transmission, “which may well increase rather than decrease work absenteeism”.

“Of course, we cannot keep the order in place indefinitely, but the pandemic is still highly active so now is not the time,” he said.

Adrian Esterman, Professor of Biostatistics at the University of South Australia, said half of people with COVID-19 were still infectious on day 5, while a quarter were infectious on day 7 and almost none on day 10.

“A sensible approach is to do what the European Union does and test to release,” Esterman said.

Under the EU system, people with COVID-19 are released from isolation after two negative rapid antigen tests taken on consecutive days after symptoms end.

Esterman said the United Kingdom, which had removed all isolation requirements, was “in deep strife” with COVID-19 cases heaping pressure on its health system.

McCaw said when the transition did occur, clear messaging would be needed “to emphasise the recommendation to continue to isolate”.

Already Wondering If On My Block Will Be Back For Season 4? Here's What We Know