STEPHEN GLOVER: What gall! After all the lectures, Michel Barnier says he’s seen the light on immigration

Sacre bleu! The Frenchman who repeatedly criticised the British Government for wanting to take back control of our borders is now blithely proposing that France should do the same thing.

Does Michel Barnier register une petite contradiction? Might he even admit to being a teeny weeny bit of a hypocrite? ‘Non’ and ‘absolument non’ are the likely answers to these questions.

For three years Mr Barnier was the EU’s chief negotiator as the Government strove to extricate Britain from the suffocating grip of Brussels. He was about as flexible as a poker. He patronised us, lectured us, and treated us as a race of sub-Neanderthals.

But now the lofty Frenchman is reinventing himself as a centre-Right presidential candidate, though most commentators regard him as a presumptuous no-hoper. In his new role he is suddenly sensitive to the concerns of many French people about uncontrolled immigration. 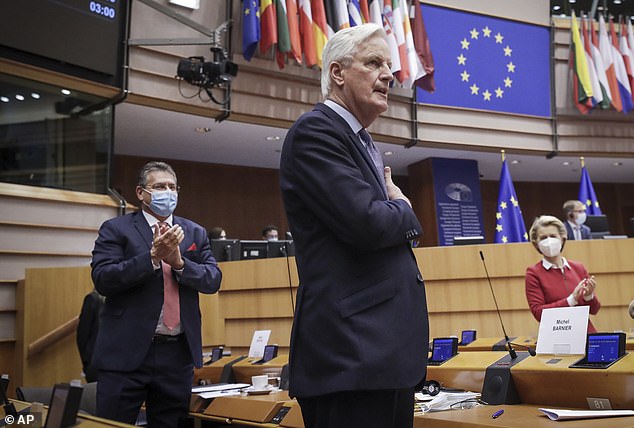 For three years Michel Barnier (centre) was the EU’s chief negotiator as the Government strove to extricate Britain from the suffocating grip of Brussels. He was about as flexible as a poker

So sensitive that he has called for France to suspend all immigration for up to five years because the EU’s external borders are, in his view, not strong enough. He admits that French voters are ‘angry’ about the large number of immigrants arriving in their country.

It’s true, of course, that Barnier used to be critical of the British desire to control immigration from the EU whereas he is denouncing the non-EU variety. But he appears to be accepting that states have a right, even a duty, to protect their own borders.

He even had a bash at fellow EU members such as Greece and Italy for having leaky borders, and said that the EU’s Schengen border-free travel zone should be reformed. Schengen covers all EU countries except Ireland, Cyprus, Romania and Croatia, plus a few non-EU ones such as Norway and Switzerland.

Well, as there is more joy in heaven over one sinner who repents than over 99 righteous people who have no need to repent, perhaps we should embrace Michel Barnier, and forgive him for his past misdeeds, including his insufferable condescension towards the British.

Speaking for myself, I am very happy to — so long as the former chief negotiator’s conversion is genuine. My worry is that he is saying what he thinks most French people want to hear without really believing it.

France is suffering a nervous breakdown. With elections only a year away, the far-Right Marine Le Pen is breathing down the neck of President Emmanuel Macron, who is experiencing his own mental crisis, one sign of which is a manic railing against Brexit Britain whenever the opportunity arises.

Extraordinary things are going on. For example, at the end of last month about 1,000 servicemen and women, including some 20 retired generals, wrote a public letter in which they suggested that Islamists were taking over large parts of the nation’s territory. The signatories asserted that France is heading for a ‘civil war’.

Another open letter along the same lines was published in a French Right-wing magazine earlier this week. It claimed to have more than 130,000 signatures. The French government has condemned both letters.

We British sometimes fret about our race relations. We have certainly suffered periodic Islamist outrages. France, though, is a far more racially divided country, and has been the victim of many more terrorist attacks. It is politically febrile. 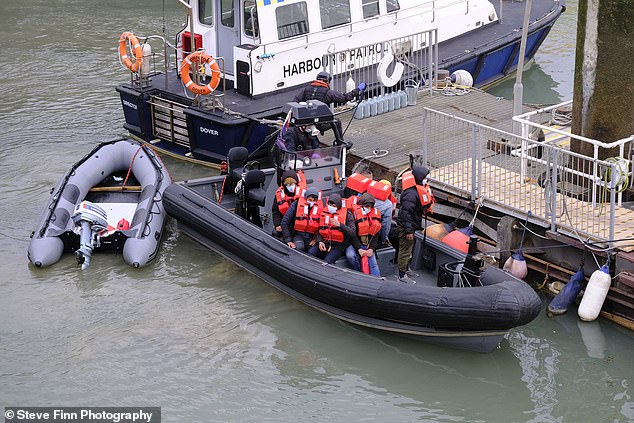 He admits that French voters are ‘angry’ about the large number of immigrants arriving in their country (pictured: Migrants brought in by Border Force Officials after crossing the Channel)

This is the context in which Mr Barnier has proposed putting up barriers against immigration. He knows there is no chance of being taken seriously by the French electorate unless he appears robust.

Last week, in an attempt to endear himself to a French public increasingly disenchanted with Brussels, he was even prepared to take a swing against his former EU colleagues for cocking up the vaccine programme.

Marine Le Pen is of course more outspoken on immigration than Barnier, and warmly endorsed the turbulent generals. But even the supposedly centrist President Macron suggested towards the end of last year that Europe should strengthen its borders.

However, words come cheaper than actions. I fear that it never occurs to the haughty former chief negotiator or the Brexit-obsessed President Macron that Britain has been triumphantly vindicated in its battle to regain control of its own borders.

That’s not to say the Government has got immigration under control and that it will never present difficulties again. The think-tank MigrationWatch warns that the relaxation of work visa rules for people in four-fifths of countries will probably lead to increased immigration after Covid-19 has receded.

Indeed, MigrationWatch (whose statistical forecasts are usually impeccable) reckons that if net immigration continues to run at the level of last year — just over a quarter of a million — a little over half of extra homes needed in England until the early 2040s will be due to immigration.

Food for thought for those Tory rebels who object to the Government’s plans unveiled in Tuesday’s Queen’s speech to boost the number of houses being built in England’s green and pleasant land.

Nonetheless, as a result of Brexit, this country is at last in a position to try to control immigration. If things go wrong, it will be our own fault. We are no longer in the hands of unaccountable panjandrums in Brussels. 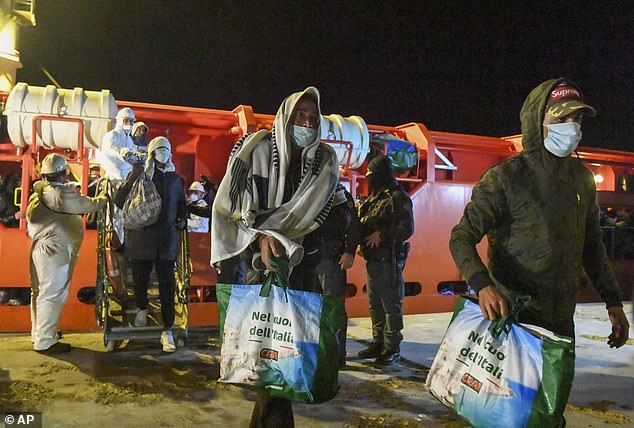 France is far from being the only European country in which immigration is a hot issue. In Italy, where an uneasy coalition is led by the (unelected) technocratic former head of the European Central Bank, Mario Draghi, immigration remains highly contentious

Not so in the EU. France is far from being the only European country in which immigration is a hot issue. In Madrid’s recent regional elections, Spain’s far-Right VOX party controversially ran posters taking aim at social benefits received by unaccompanied minors arriving as migrants. Vox will be a junior partner in Madrid’s administration.

In Italy, where an uneasy coalition is led by the (unelected) technocratic former head of the European Central Bank, Mario Draghi, immigration remains highly contentious. So far this year, some 13,000 migrants have arrived on Italy’s shores, most of them from Libya, an increase of more than 4,000 over the same period in 2020.

In Germany, the far-Right Alternative for Germany lost ground in state elections in March but could fare well in September’s national elections. Meanwhile, a prominent Green Party German mayor has just been expelled from his party for posting a racial slur about a footballer on social media. A country in which a green is a racist may have a problem.

Admittedly, if European countries were able to regain control of their own borders in the way Britain has done, they would still be vulnerable to illegal immigration, as this country is. But at least they would have the sense of being in charge of their own destiny.

As it is, Brussels is in charge of rules that don’t suit individual nations. The EU immigration policy is overseen by unaccountable, rigid bureaucrats — just as the vaccine catastrophe, engineered in Brussels, has been.

Will people continue to put up with rules handed down by the EU, especially in those countries which are going to struggle economically in the aftermath of Covid? I am not at all sure that the French will.

If only the epitome of EU officialdom, Michel Barnier, had experienced a true conversion. How wonderful if he really accepted that Brussels doesn’t always know best.

I suspect, though, that he is only trying to get elected. He’s probably just being cynical. This supercilious French politician is unlikely ever to grasp why it’s best for countries to be in control of their own borders.

'Rugrats' Revival With Original Voice Cast to Premiere on Paramount+