Chances are you know what it’s like to have your peaceful shower thoughts suddenly interrupted by the absolute horror of realizing that the bottom of your shower liner is covered in icky, green mildew. Yuck. 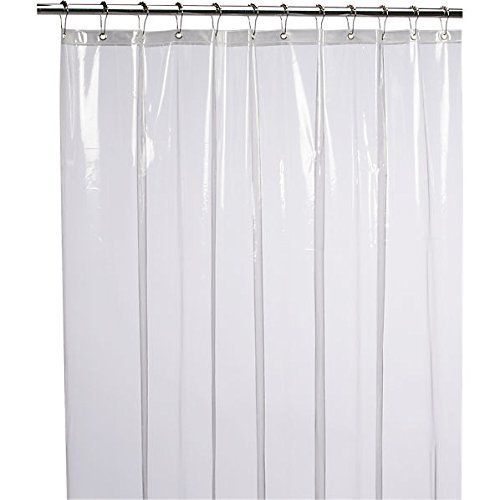 But whether you’re the person who sees it and make it works for another couple of weeks, or the kind that immediately heads to the store to buy one that’ll hold you over till it happens again, I’ve finally got the solution for you: The LiBa Milder Resistant Shower Curtain Liner. It’s the number one best-selling shower curtain liner on Amazon, so you know it’s good for something.

Forget buying a new liner every couple of months because this one probably lasts way longer than your typical go-to, according to a bunch of Amazon reviews like this one.

“It lasted a year in a bathroom that has fairly bad mold issues, plus that’s way longer than I’ve ever had a shower curtain last ANYWHERE, so I’m pretty pleased with it and happy to buy another,” wrote one customer.

The liner is made with a proprietary mildew treatment which protects the curtain against mold and mildew. (Pro tip: If you want your liner to last even longer, it’s a good idea to periodically wipe it and rinse it.)

It fits any standard shower or tub, and works with both straight and curbed shower rods, so you don’t have to worry about water escaping onto your bathroom floor or your precious shower curtain being seriously damaged from too much water exposure.

The LiBa shower curtain liner has received over 14,000 positive reviews on Amazon, and people can’t stop talking about its durability.

“I have waited 6 months to write this review and my original liner looks as good as the day I hung it. No mildew or rust. The magnets have weight and stick well to the bath. So I replaced the liner in my other bathroom with another one of these.”

And another thing customers liked: It doesn’t have that new plastic kind of smell.

“Thank goodness!!! Finally a nice, thick, durable, clear shower curtain THAT HAS NO PLASTIC smell from what I could tell. I’ve opened some shower curtains over the years that had such a strong plastic chemical smell, that I would have to buy a different one BUT not this one.”

You won’t have to dish out a ton of cash for this one. This mildew resistant shower curtain is only $9.99 on Amazon.

The real reason your feet swell when pregnant, and what to do about it