Home » Lifestyle » The 11 Shortest ‘Bachelor’ Engagements Are Such A Throwback

The Bachelor franchise is known for its dramatic engagement scenes, which typically involve picturesque vacation destinations, glittery ball gowns, a visit from Neil Lane, and that fabled final rose. These love stories are always fun to watch on TV, but unfortunately, the show doesn’t have a great track record for long-term relationship success. The shortest Bachelor engagements were so quick you might have forgotten them — but they’ll live on forever on TV screens and in Bachelor lore.

The show promotes a fairytale romance, but once the cameras stop rolling, life gets real… and not always in a good way. A few couples (like Sean and Catherine Lowe and Ryan and Trista Sutter) have beaten the odds and stayed together for the long haul, but many more have ended things after a turbulent few months. Let’s take a trip down memory lane to recall the failed engagements of seasons past. Some of these couples met on The Bachelor, some on The Bachelorette, some fell in love in Paradise or on Winter Games — and all walked away with a diamond ring and a promise of forever.

They’re no longer together, but true Bachelor fans won’t forget their dramatic love sagas… for better or for worse. 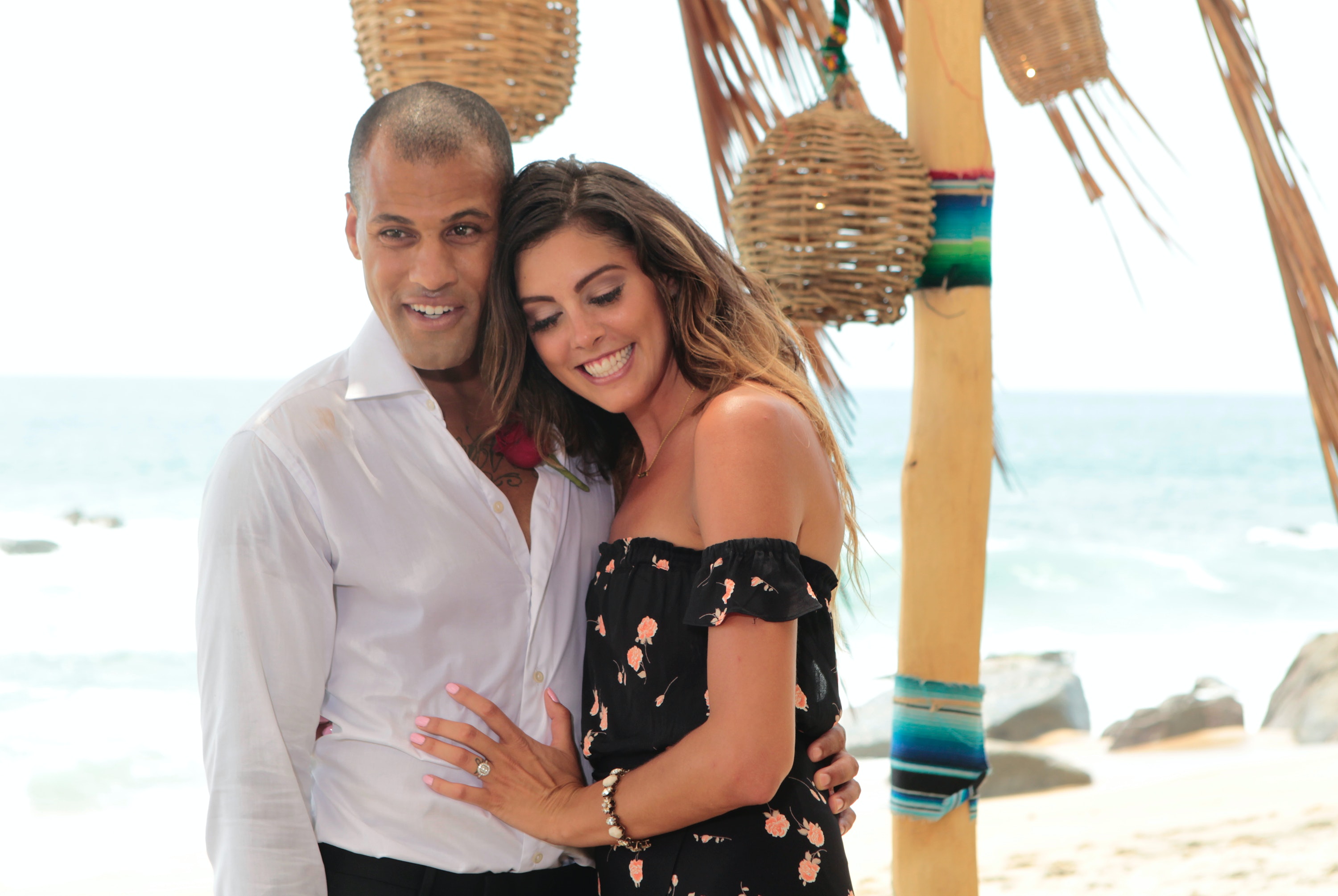 Based on their sizzling chemistry during BiP Season 3, it was no surprise to see Morris and Kemp get engaged on the beach in summer 2016. They moved in together in San Francisco soon afterward, but on Nov. 28, 2016, it was reported that Morris had moved out. “For a month, we were kind of starting to bicker, and it was a thing of, something’s got to give,” Morris told ET at the time. “It was a cycle we couldn’t break.” 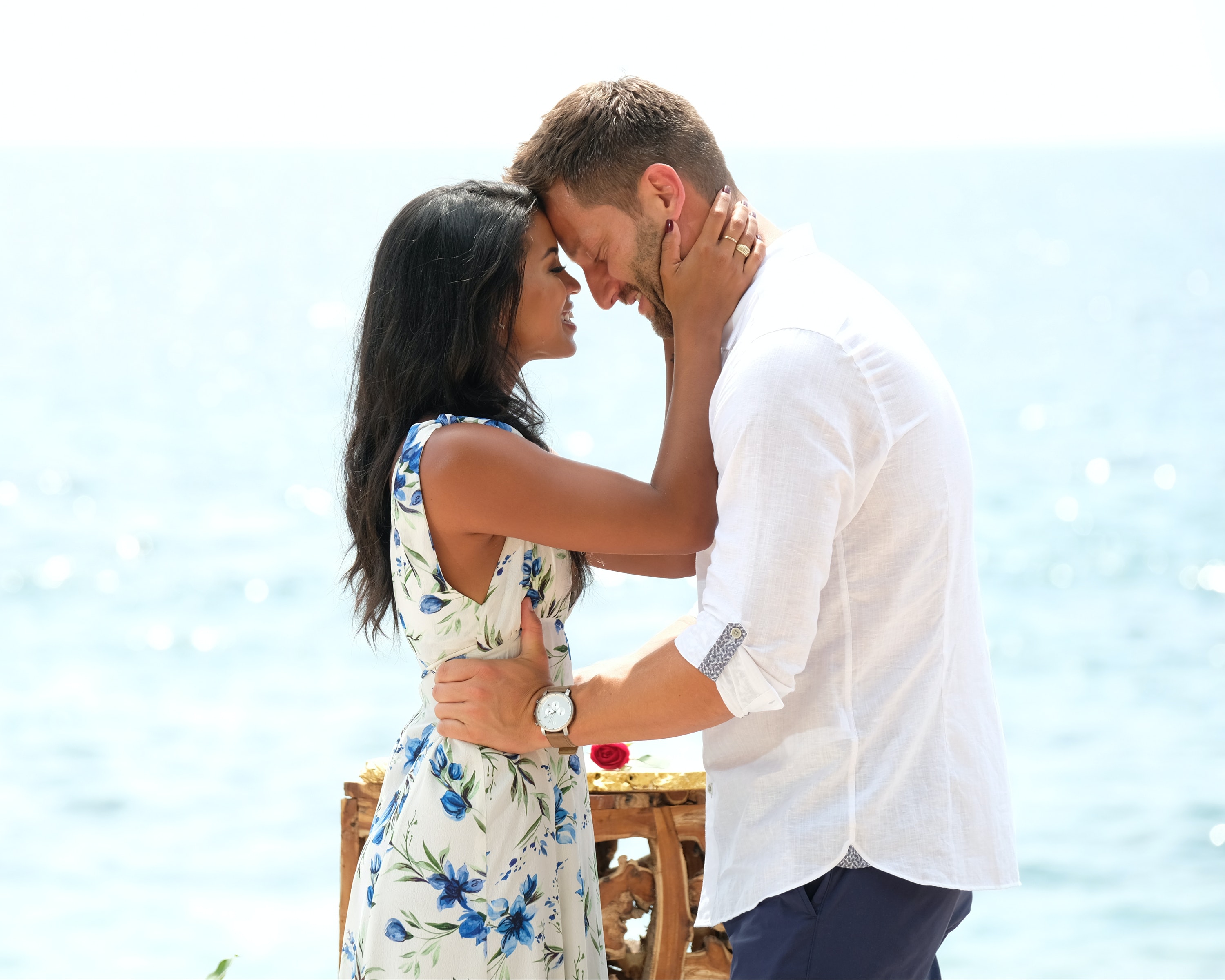 Chris Bukowski is a veteran franchise alum who started his journey on Emily Maynard’s 2012 season of The Bachelorette. He got engaged to Katie Morton (from Colton Underwood’s Bachelor season) on BiP Season 6, but at the live finale, the couple revealed that their relationship was on rocky ground. “I fell in love with potential that may never come to fruition, but I’m just praying it does,” Morton told Chris Harrison at the time. They sorted things out and stayed together for a few more months, but then announced their split in joint IG posts on Dec. 10, 2019. 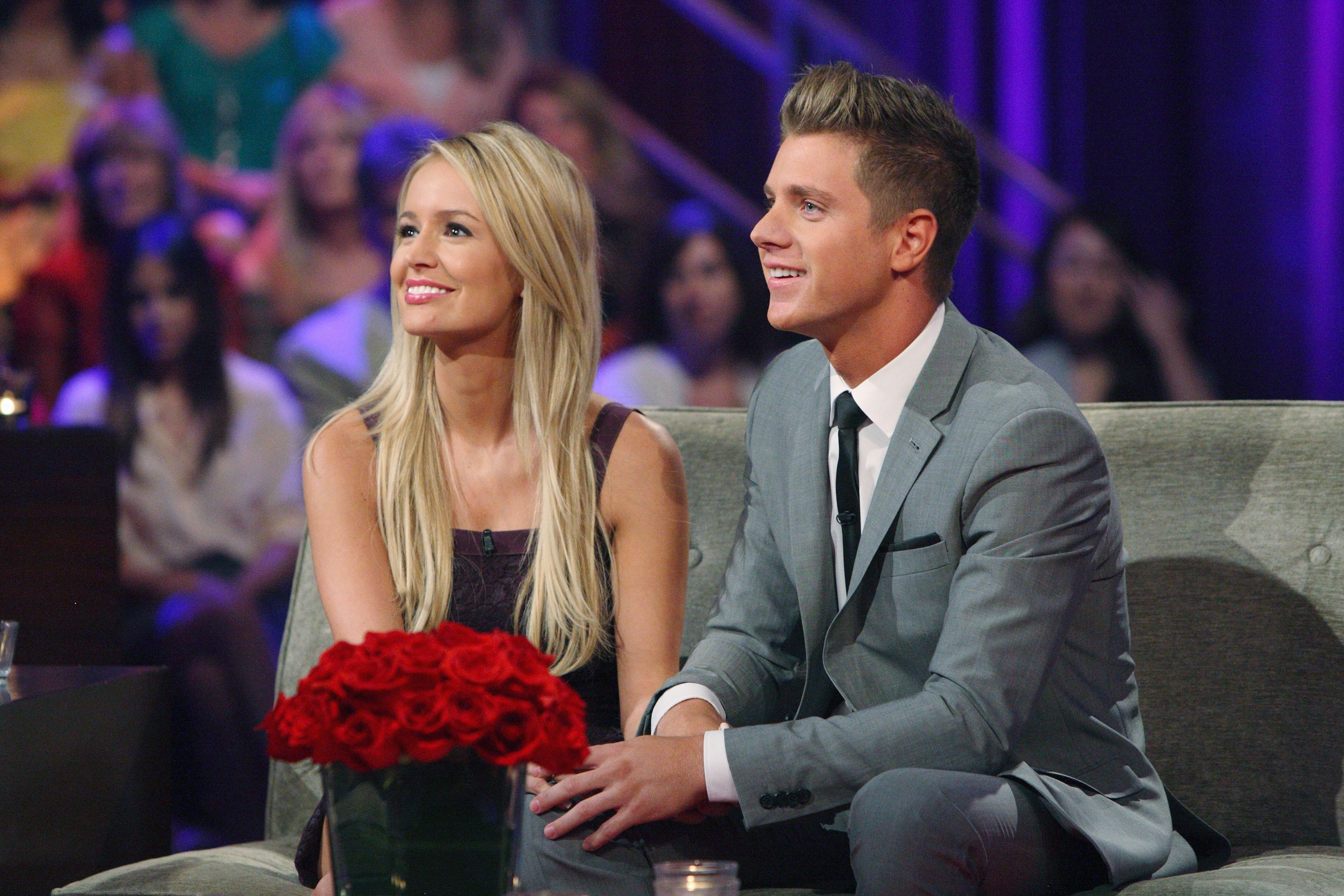 Emily Maynard was named The Bachelorette in 2012 after her failed eight-month engagement to Bachelor Brad Womack in 2011. She chose Utah businessman Jef Holm in the finale, and they dated for a few months, but on Oct. 12, 2012, they told People they had split. “I have nothing but respect and love for Jef and his family, but ultimately we are just at different points in our lives,” Maynard said at the time. 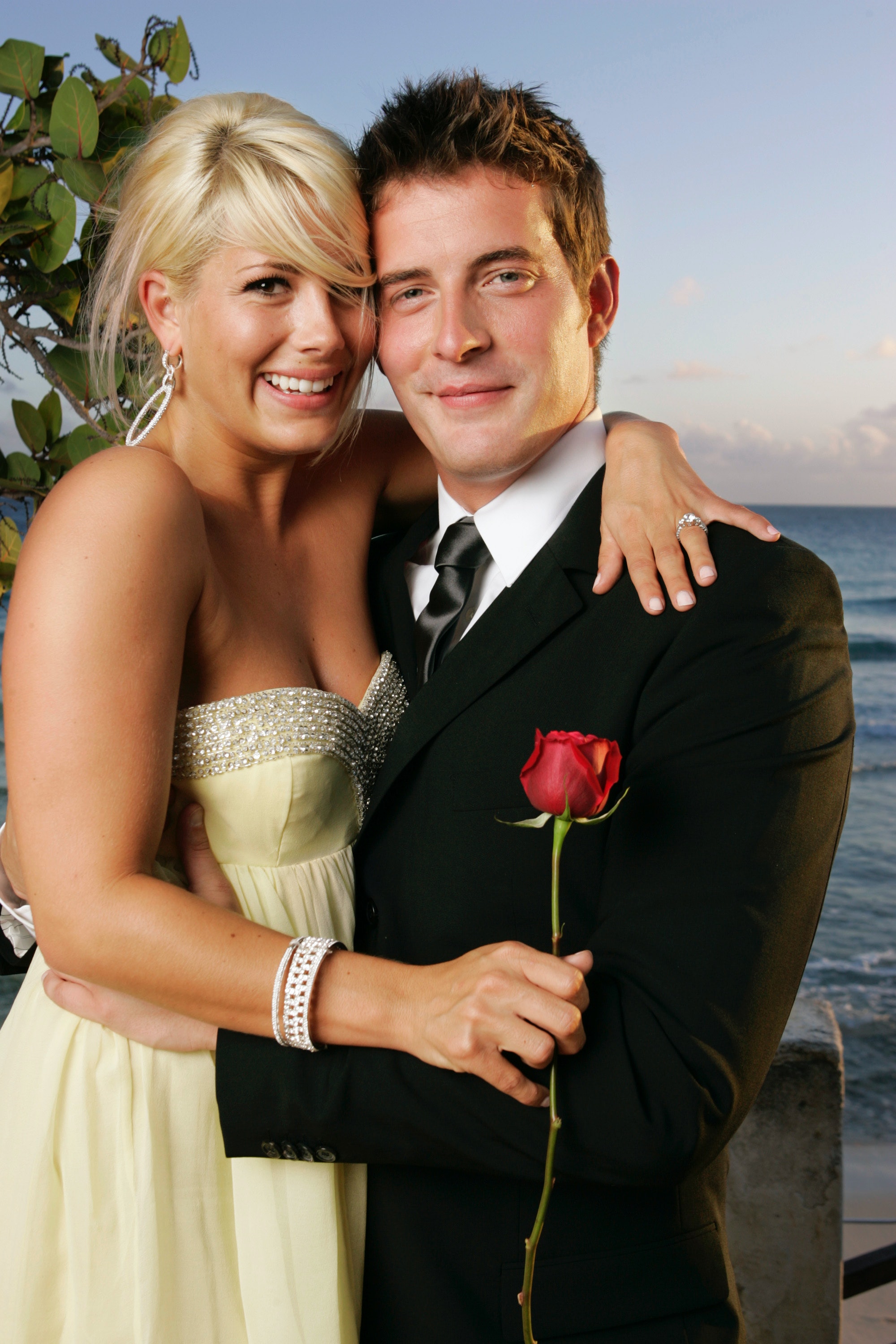 Matt Grant was the British star of The Bachelor Season 11 in 2008. He chose Lamas to receive his final rose, and the two stayed together through the show’s finale and reunion special. They moved in together in Los Angeles, but rumors soon circulated that their relationship was in trouble — and those reports escalated when Grant moved out. By later that summer, they announced in a statement to People that they were over. 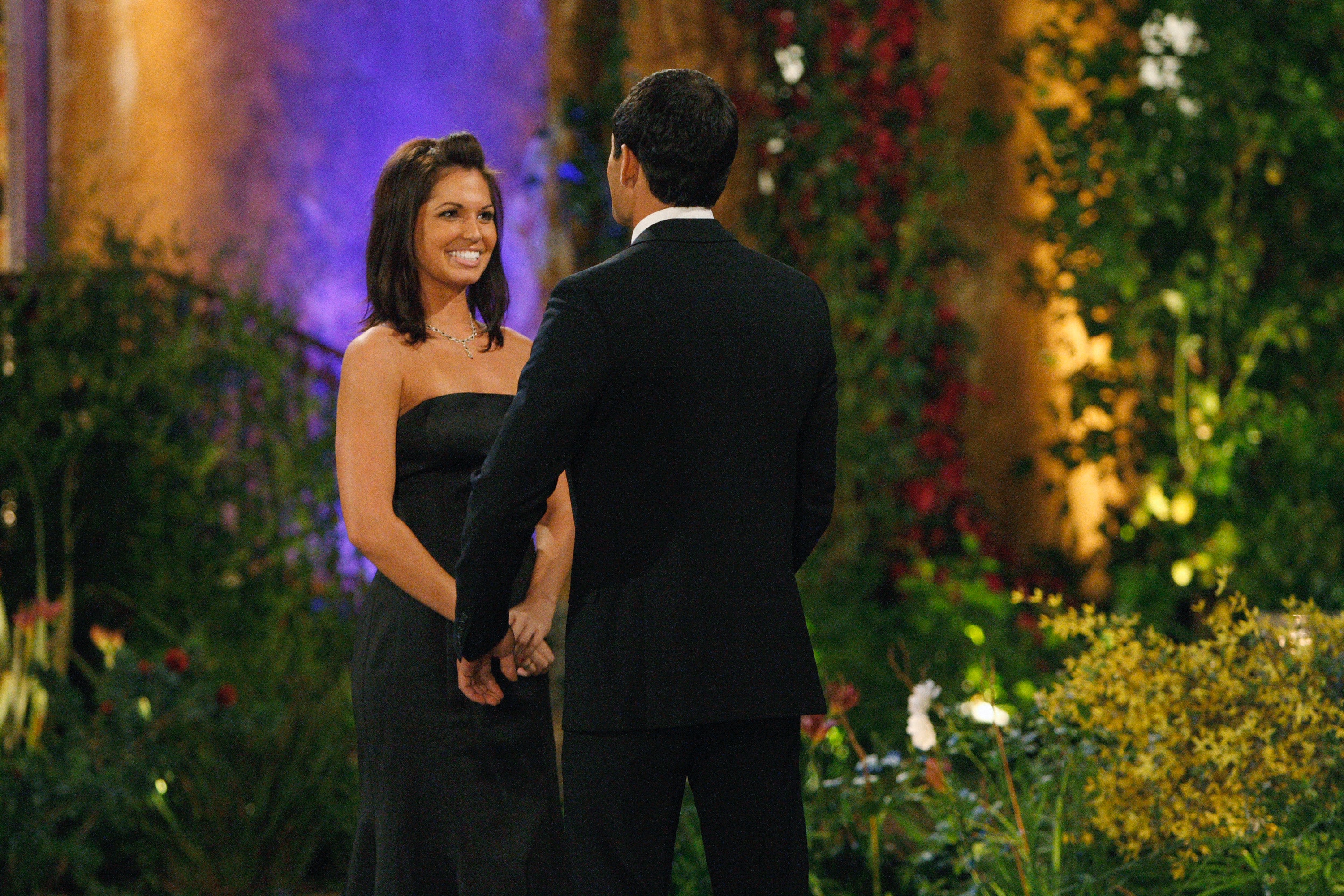 Mesnick got engaged to Rycroft on The Bachelor in 2009. But during the live finale episode four months later, he broke up with her to pursue a relationship with runner-up Molly Malaney. This change of heart inspired the infamous Bachelor phrase “pulling a Mesnick,” which was later used when Arie Luyendyk, Jr. made a similar decision in his season. Mesnick and Malaney ultimately got married and are still together with their two children. 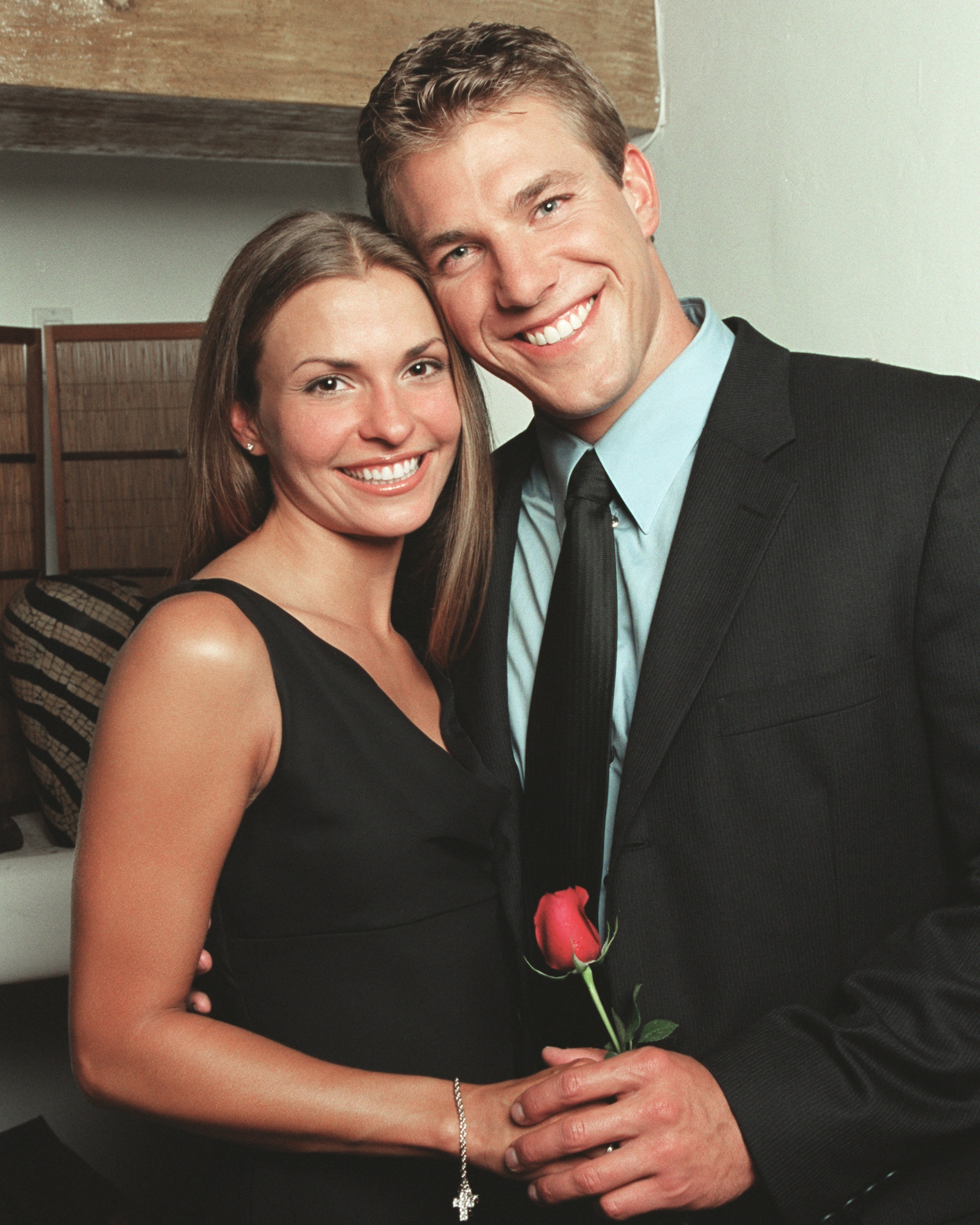 Buerge and Eksterowicz got engaged during Season 2 of The Bachelor in 2002, but from the beginning, their relationship was not easy. They broke up briefly while the show was still airing, then got re-engaged when the finale aired, then broke things off for good at a Starbucks five weeks later. They hashed out the breakup in an ABC special the next spring, titled The Bachelor: Aaron and Helene Tell All. 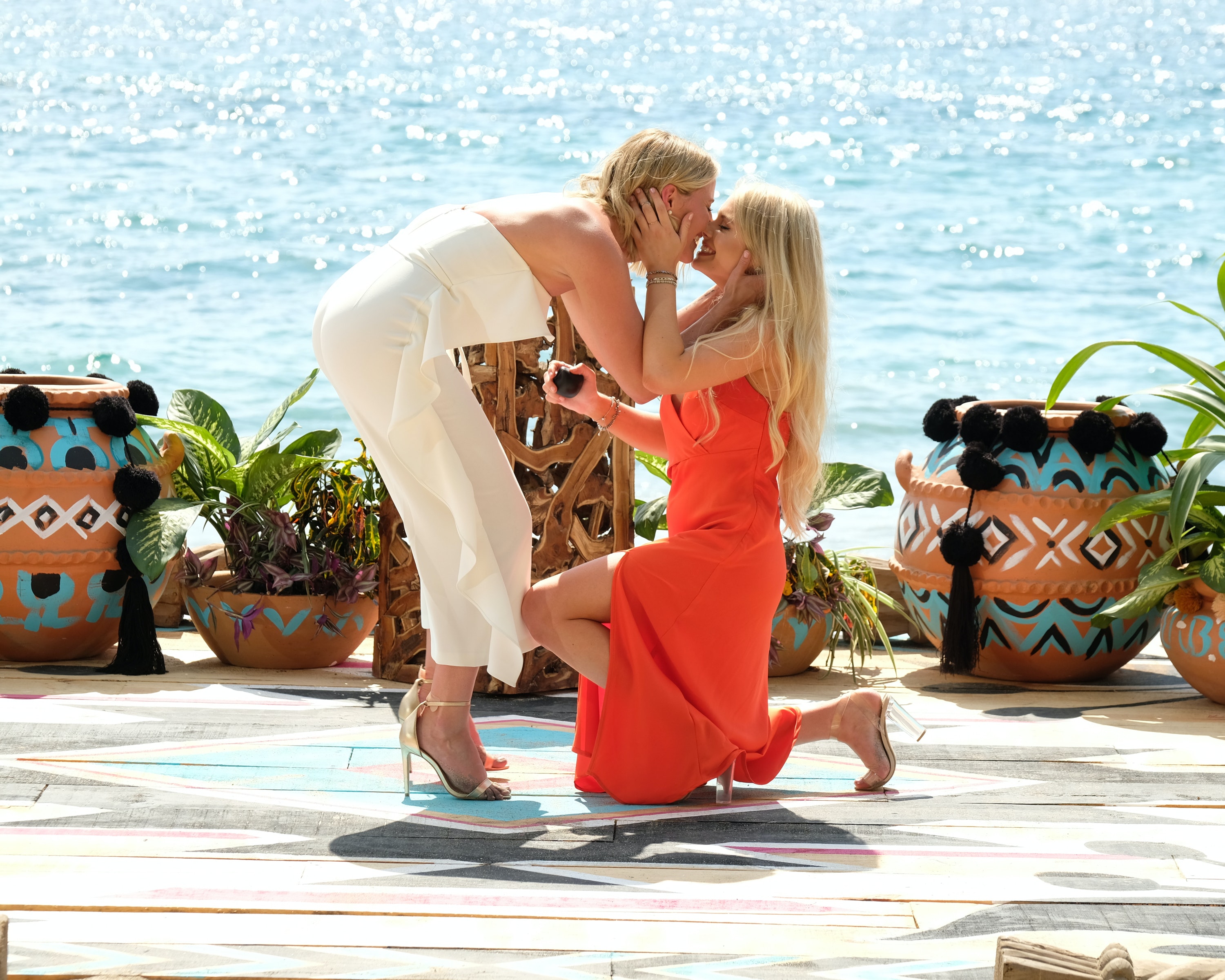 The franchise’s first same-sex couple was a fan favorite from Season 6 of Bachelor in Paradise. Burnett had been a contestant on Underwood’s season of The Bachelor, and she met Haggerty outside the show. After a short relationship with Derek Peth on BiP, Burnett revealed that Haggerty was the person she truly wanted to be with, and the two reunited when Haggerty showed up on the beach. Their engagement was a peak moment of the season, and even landed Burnett a spot on Ellen, but they announced their breakup in a joint statement on Oct. 31, 2019. 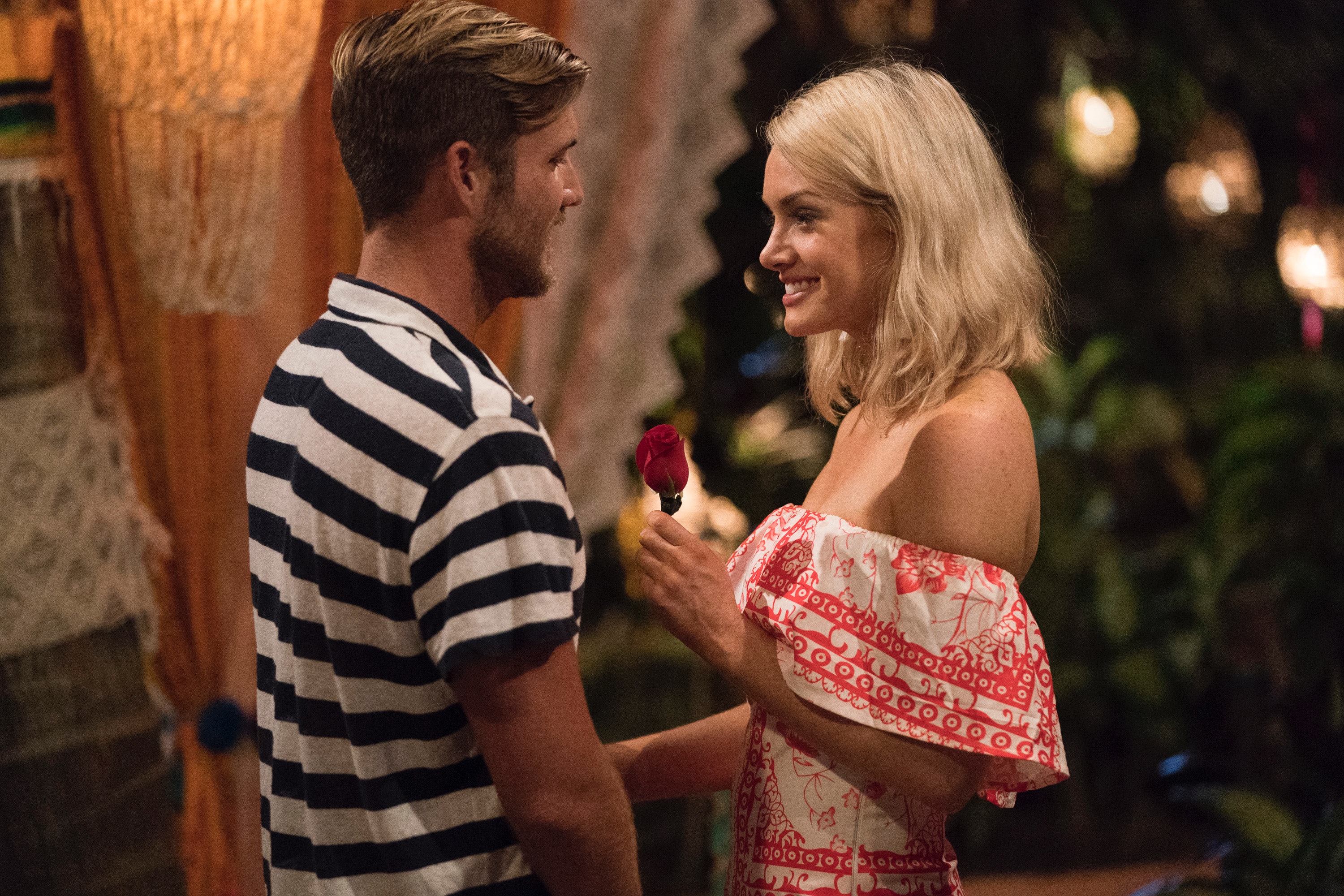 Kimball and Cooper’s brief relationship was the talk of Bachelor Nation for a few months in 2018. They met and fell in love on Season 5 of BiP, but the day their proposal aired, Reality Steve published screenshots of a text conversation that reportedly showed Cooper was cheating on Kimball. Kimball ended the engagement soon afterward, though Cooper claimed the texts were fabricated. 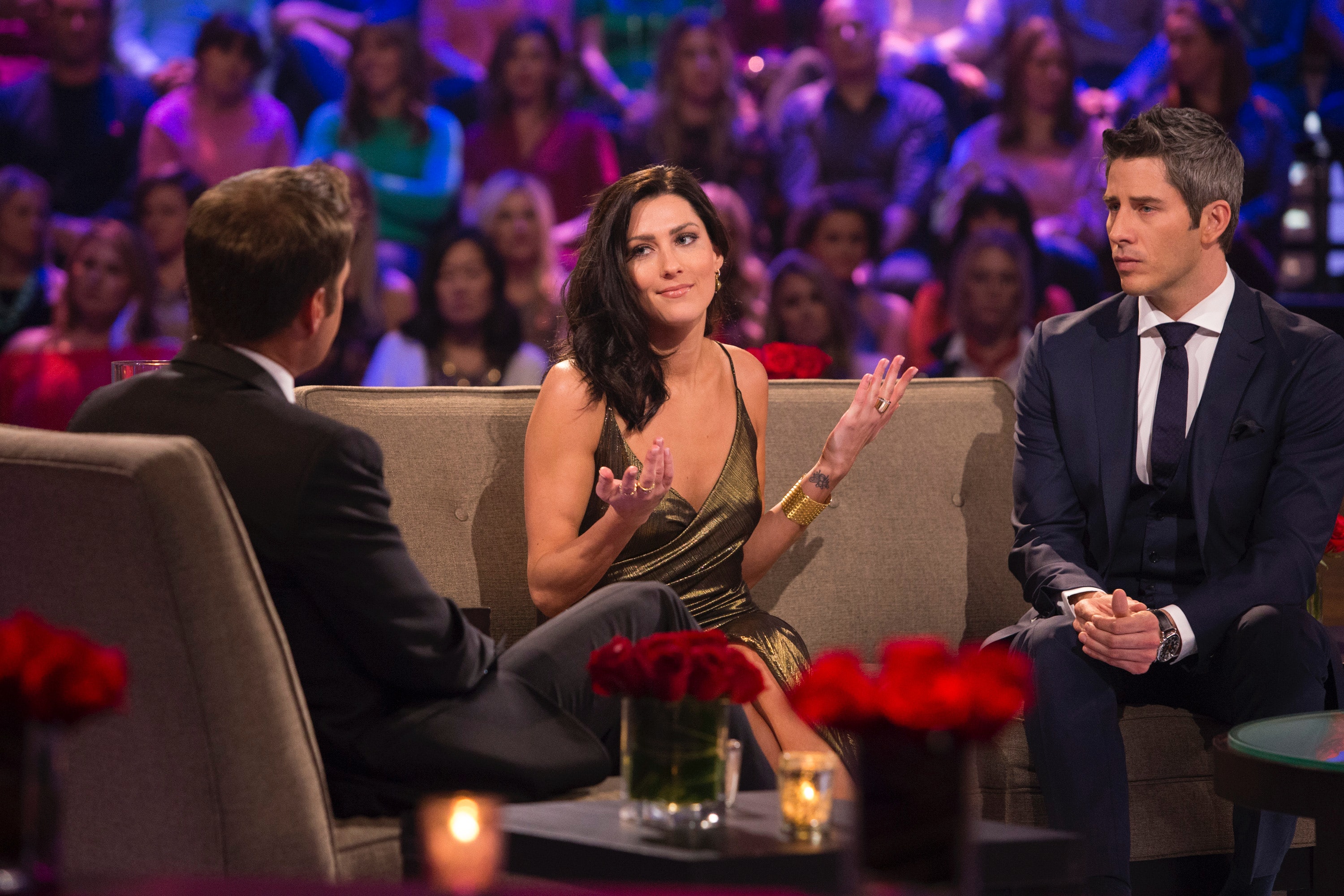 Arie Luyendyk, Jr., The Bachelor’s 2018 lead, got engaged to Becca Kufrin on the season finale, but their blissful new life together didn’t last for long. Luyendyk began having second thoughts in the ensuing weeks, and he ultimately broke up with Kufrin to give things a shot with his runner-up Lauren Burnham. Everyone’s happy now, though, because Luyendyk and Burnham are now married with a daughter, and Kufrin went on to find love with Garrett Yrigoyen on The Bachelorette. Crawley may now be the 2020 Bachelorette, but she was previously seen on several Bachelor-adjacent shows, including BiP Seasons 1 and 2 and Bachelor Winter Games in 2018. She got engaged to fellow contestant Besusejour-Savard during Winter Games, but they only lasted a couple of months as a couple. On Apr. 6, 2018, they announced their split on IG. But in case you’re wondering, Besusejour-Savard is still extremely supportive of his ex, and he congratulated her on becoming the Bachelorette. “Congratulations to this gem!! She will be an amazing Bachelorette,” he wrote on IG. “She is smart, fun, strong, knows what she wants and most importantly, she will call out the guys messing around!! Hell yeah!! Good Luck on your journey to find love @clarecrawley !! You will be the best.” 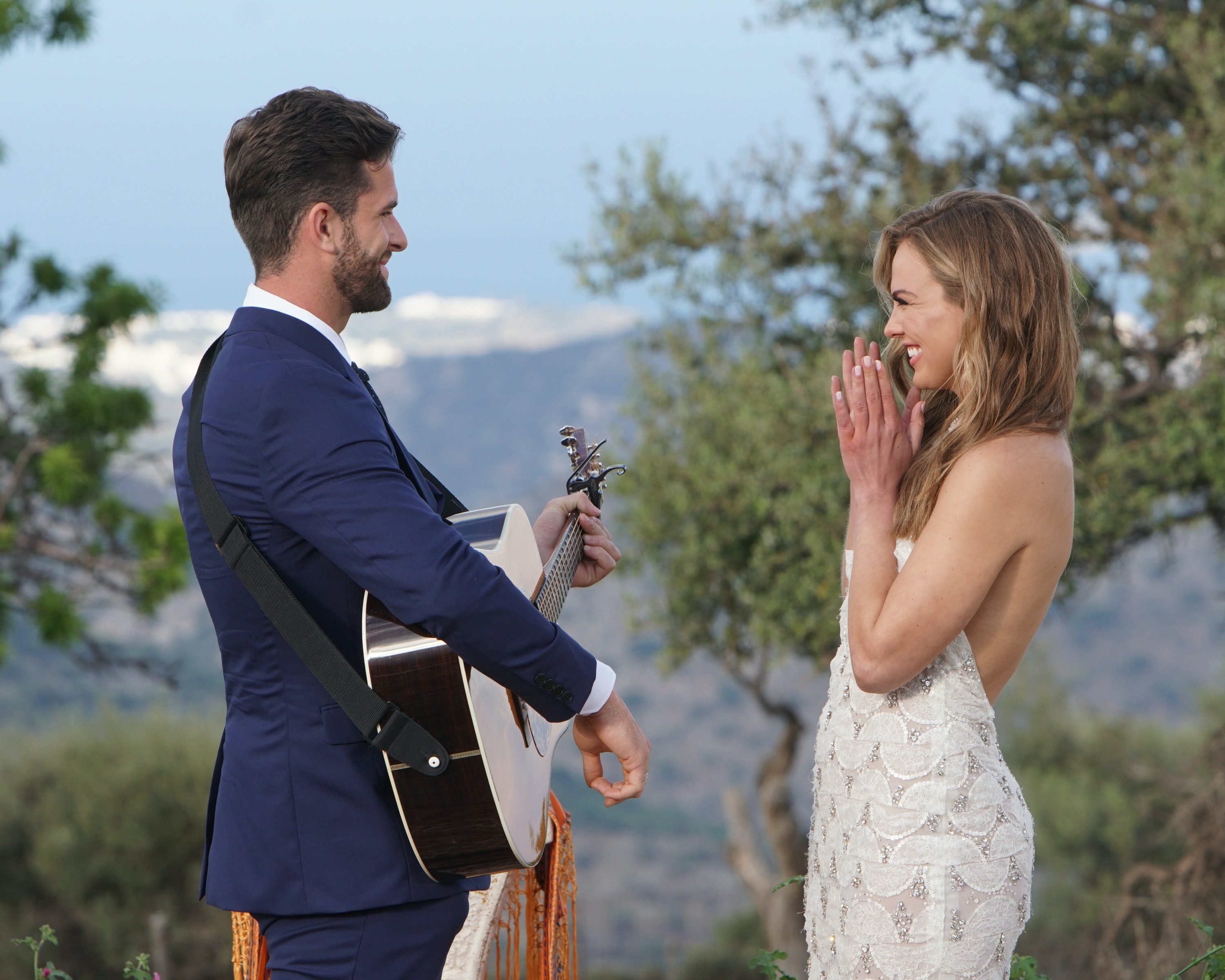 Who could forget Hannah Brown’s season of The Bachelorette in 2019? The former pageant queen from Alamaa won viewers’ hearts for her keep-it-real attitude and natural charm, but she didn’t have such great luck finding a life-long relationship. Shortly after her engagement to Jed Wyatt, People reported that Wyatt had a girlfriend prior to joining the show — and he reportedly hadn’t clearly broken up with her. Brown ended her engagement to Wyatt just about a month after it happened, and asked out her runner-up Tyler Cameron in the live finale.

These couples didn’t make it to the altar, but their relationships were epic while they lasted. And thankfully, most of them have gone on to live their best lives without each other in the years since. All’s well that ends well!

My Sexuality Is As Fluid As My Netflix Queue