Home » Lifestyle » The Bears benched Mitch Trubisky for Nick Foles, and it paid off with 3 fourth-quarter touchdowns for a come-from-behind win 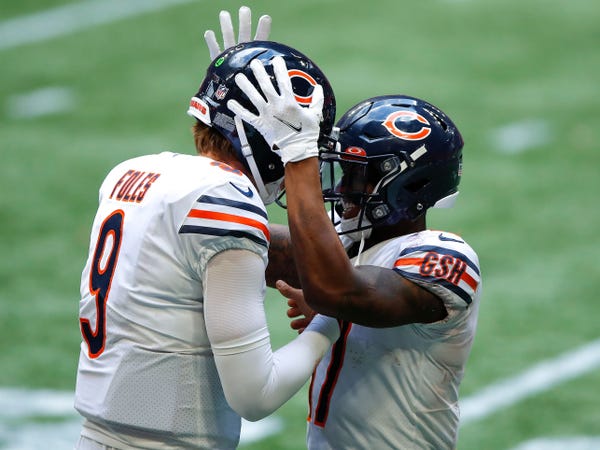 Nick Foles is no stranger to miracles.

The former Super Bowl MVP has made the biggest plays of his career coming in for teams as a backup, and on Sunday, he worked his magic again for the Chicago Bears.

Chicago benched struggling starter Mitch Trubisky in favor of Foles in the third quarter after a poor interception, and the move paid off big time.

Foles didn't start hot from his first throw, and even threw an interception of his own before getting the Bears offense going. But trailing 26-10 with just nine minutes remaining, Foles caught fire, leading the Chicago offense on three successive touchdown drives for the dramatic win.

He got some help from his receivers, with Allen Robinson making a big play with his legs to get the Bears second touchdown of the fourth quarter.

After another stop from the Chicago defense, Foles completed the comeback, sacrificing his body and taking a massive hit to connect with Anthony Miller as he fell into the end zone.

It's not often that a 2-0 team makes a mid-game switch at quarterback, but for the Bears, it was the right move, as Chicago moved to 3-0 on the season thanks to their second fourth-quarter comeback in three weeks.

It's another heartbreaking loss for the Falcons in a young season that has already been full of them. Last week, Atlanta blew a late lead to the Dallas Cowboys after allowing them to recover an onside kick in baffling fashion.

According to ESPN's Field Yates, no team in the NFL had blown multiple 15-point fourth-quarter leads in a single season over the past 20 years. The Falcons have now done it in back-to-back games.

Justin Bieber Kicks Off 2021 With New Video 'Anyone'