Home » Lifestyle » The Blurred Lines case scared songwriters, but its time may be up

In the five years since a federal jury decided that Robin Thicke's hit song Blurred Lines had copied Marvin Gaye's disco-era standard Got to Give It Up, the music industry has been in an anxious state about copyright.

That case and others raised serious questions about the legal protections available for music: When does homage become plagiarism? When does a common chord progression become one songwriter's property? Songwriters and producers worried that their next hit could make them the target of a lawsuit. 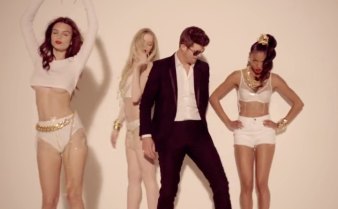 Robin Thicke’s song Blurred Lines made headlines for various reasons when it was released in 2013.

But the tide may be changing, after two court decisions this month addressed important aspects of how copyright applies to music – and, in many cases, may make it more difficult to prove that one song copied another.

As Christine Lepera, a lawyer for Katy Perry in a recent copyright suit, put it: "The Blurred Lines curse – its chilling effect – has been lifted."

The catalyst is Led Zeppelin, which was accused of borrowing the pastoral opening to its 1971 classic-rock odyssey Stairway to Heaven from a lesser-known song, Taurus by the band Spirit; the two songs share a similar chord sequence and a bass line that descends along a chromatic scale. Led Zeppelin prevailed at trial, and this month the 9th U.S. Circuit Court of Appeals upheld the jury's verdict.

In a footnote to its 73-page decision, the 9th Circuit – which heard the appeal "en banc," or as a full panel of 11 judges – also explained what constitutes illegal copying when it comes to works that involve generic or commonplace elements. In those cases, the judges said, only a minimal, or "thin," level of copyright applies, and a plaintiff must show that a work is "virtually identical" to a defendant's.

The author of the panel's majority opinion, Judge M. Margaret McKeown, gave no specifics about what kinds of works may apply, just that they must be virtually identical "if the range of protectable expression is narrow." But lawyers, and at least one judge, seized on that statement as applying to brief musical passages that may recycle common chords or melodies – exactly the situation with Perry's hit Dark Horse, which a jury last year found had infringed on an eight-note instrumental pattern in a Christian rap song.

Just a week after the Led Zeppelin decision, the judge in Perry's case, Christina A. Snyder of U.S. District Court in Los Angeles, cited the 9th Circuit's footnote in a ruling that threw out the Dark Horse jury's verdict – and, with it, a $US2.8 million ($4.6 million) damages award. Those eight notes were "not a particularly unique or rare combination," Snyder wrote, and therefore could not be protected by copyright. (Lawyers for the plaintiff, Marcus Gray, who performs under the name Flame, have said they will appeal.)

As many litigators and legal scholars see it, these decisions have quickly reset the balance of power in music copyright cases. Since Blurred Lines, a series of lawsuits have focused on short phrases or chunks of generic musical elements in combination; those cases may now be harder for plaintiffs to win.

"Before Led Zeppelin's en banc ruling, plaintiffs were on a roll," said Joseph P. Fishman, an associate professor at the Vanderbilt Law School in Nashville. "That string of events built a narrative that successful musicians really needed to be worried about being sued. Now, with the Katy Perry verdict being thrown out only a week after the big Led Zeppelin decision, that narrative may change."

The two decisions addressed what has become a key question as more copyright suits have focused on song fragments: what is original about them – and thus can be copyrighted – and what are basic building blocks that cannot be owned by any songwriter?

For years, lawyers have complained that the complexities of music have made judges reluctant to dismiss cases before they reach a jury. And juries struggle with the job of separating what aspects of a song are protected by copyright from those that aren't, said Christopher J. Buccafusco, a professor at Cardozo Law School.

"Juries are often told, essentially, 'Listen to this song – but only listen to the original parts,'" Buccafusco said. "How do you do that?"

By more strictly defining what can and cannot be copyrighted in musical fragments, the Led Zeppelin and Perry decisions may give judges more leeway to dismiss cases before they ever reach a jury, said Fishman, of Vanderbilt.

Not all lawyers agree with that interpretation. Richard S. Busch, who won the Blurred Lines case for Gaye's children, said that the "virtually identical" standard mentioned by the 9th Circuit does not apply to music, in part because, he said, the cases cited in McKeown's footnote involved computer operating systems and the design of children's dolls – but not music.

"Thin copyright might apply to a doll or a painting because, for example, there are just so many ways to paint a tomato," Busch said. "Creative choices are limited. It has never applied to music because there are literally an infinite number of creative choices in creating a song."

But other litigators said they are already expecting more difficulties in bringing music copyright cases.

Sam P. Israel, who represented a musician who sued Carrie Underwood (the case was withdrawn), called the 9th Circuit's decision on Led Zeppelin "deadly" for potential plaintiffs, suggesting that the pendulum had swung far.

"It's going to have a chilling effect," he said, "on people who want to bring a complaint."

14 Make-Ahead Freezer Meals for Nights When You Just Can't

Tom Thibodeau was NBA’s best coach, and it wasn’t even close