It is 30 years since Spike Lee’s incendiary third movie Do The Right Thing shone a harsh light on the killing of black Americans by police. Radio Raheem, who is choked to death in the film’s climatic scene, was a fictional character, but his violent death at the hands of baton-wielding cops felt very real in a country where African Americans are 2.5 times more likely to be killed by police than white people.

Little has changed in the three decades since Lee released his call to arms, says Lena Waithe, the writer and producer of Queen and Slim, a provocative new film about two black Americans who go on the run after killing a white police officer in self-defence. She regards Do The Right Thing as a landmark movie and says the issues it highlighted in 1989 are far from resolved. “We can’t deny that we are still dealing with these things,” says the 35-year-old, who is best known as one of the stars of the Netflix comedy-drama Master of None. “The fact that law enforcement is not necessarily on our side and we feel like we are being hunted is both scary and sad. Black people are still making movies about this problem because the problem still exists.” 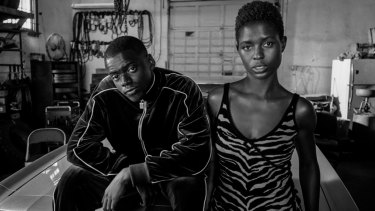 Slim (Daniel Kaluuya) and Queen (Jodie Turner-Smith) go on the run after the death of a police officer in Queen and Slim.

Melina Matsoukas, the director of Queen and Slim, nods in agreement. “It’s modern-day lynching,” she says quietly. “As a black person, seeing your family, your community being murdered on a daily basis has an emotional impact. It’s like PTSD. It could be your mother, your sister, your father, your aunt, your husband or your wife. Seeing these people that you don’t know, but have a kinship with, [being killed] on the nightly news, creates an emotional stress.”

The frequency with which black people are killed by police and the apparent impunity the US judicial system grants officers who kill in the line of duty, led to the formation of the Black Lives Matter movement in 2013. But the bloodshed continues. In 2015 a record number of young black men – 1134 in total – were killed by law enforcement officers.

Queen and Slim is Waithe and Matsoukas’ response. They call it “protest art”, a fair description of a film that starts with a bad Tinder date and combines an odd couple love story with humour, great music – the soundtrack includes new tunes by Lauryn Hill and Vince Staples – and a polemic about race. It is, as one critic put it, an “urgent, beautiful and socially conscious trip through the American racial psyche”.

In the opening scene an unnamed young black man played by Daniel Kaluuya (the British actor nominated for an Oscar for his lead role in the audaciously brilliant 2017 horror flick Get Out) takes a beautiful young black lawyer to a Cleveland diner. Things don’t go well. The woman played by Jodie Turner-Smith (a British-born model-turned-actor) seems aloof and uninterested. As they drive away from the diner in a white Honda Accord, they know there will be no second date. 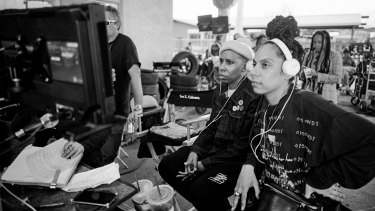 Screenwriter Lena Waithe (left) and director Melina Matsoukas on the set of Queen and Slim.

When their car inadvertently runs a stop sign, the couple are pulled over by a white police officer. He is hostile and demands to search the vehicle. The driver, who we come to understand is Slim, is compliant; the woman, Queen, is angry. Both of them are frightened and the volatile situation turns violent. As the police officer lies dead in the snow, shot in the head by his own gun, the protagonists make the momentous decision to flee.

Matsoukas says the fear experienced by Queen and Slim when they see the patrol car’s flashing lights in the rear vision mirror would be familiar to any person of colour living in America. “I’ve been pulled over by cops on my own, with my boyfriend, with my brother and I’ve been harassed and racially profiled,” she says. “That definitely happens to all of us. Queen and Slim have a similar response – that sense of fear and wondering if they’re going to make it out of the encounter. We wanted audiences to feel and understand that.”

The film has been described as a black version of Thelma and Louise or Bonnie and Clyde. Matsoukas knows such labels are inevitable, but considers them lazy and reductive. “I hate the way there’s a need to base black films on a white archetype,” she says with a sigh. “This is a singular, unique story that exemplifies the black experience. They’re [Queen and Slim] not criminals and they’re not on a killing or robbing spree.”

The fugitives’ backroads journey from Ohio to Florida is far from arbitrary. Waithe conceived her story as a “reverse slave escape narrative”. It starts in a city, Cleveland, that was the last stop on the Underground Railroad, the network of secret routes and safe houses used by slaves fleeing the Deep South in the early to mid-19th century. The fact Queen and Slim are trying to escape to Cuba is also significant. Assata Shakur, a member of the Black Liberation Army, fled to the Caribbean island after she was involved in a deadly shootout with state troopers in 1973. Shakur, who was convicted of first-degree murder and remains on the FBI’s most wanted list, is a polarising figure in America where some regard her as a terrorist, others as a revolutionary.

Queen and Slim find themselves in a similar position. Demonised by the authorities and many white Americans, they are embraced and protected by the black community. “You’re safe here,” whispers the woman behind the bar at a juke joint in Louisiana when the runaways interrupt their journey for a fleeting dance.

The two women responsible for this remarkable film appear a study in contrasts when I meet them at a hotel in London’s Soho. Matsoukas wears a striped Gucci tracksuit and heels, a suitably glamorous outfit for a filmmaker who cut her teeth making music videos for A-listers such as Beyonce, Rihanna and Snoop Dog. The 39-year-old courted controversy by putting Lady Bey on the roof of a sinking New Orleans Police Department car for the Formation video and portrayed Rihanna, a woman abused by her former boyfriend Chris Brown, in a volatile relationship for the clip accompanying We Found Love.

“I’ve made my biggest cultural impact in music video,” she says. “It’s not considered a true form of filmmaking, but really they’re experimental short films. They’re challenging to make and great training for storytelling and building worlds.”

Waithe, who manages to combine acting with writing and producing, sits cross-legged on a sofa, her face partly obscured by a grey hoodie. She’s nursing a cold and texting intermittently – polite, but subdued. Her demeanour might be the result of recent events. A week earlier she and her wife, the film executive Alana Mayo, announced they were separating after just two months of marriage, an event that triggered a deluge of speculation about the reasons for the split. 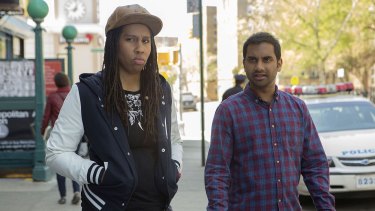 Lena Waithe as Denise and Aziz Ansari as Dev in Master of None.

Matsoukas and Waithe worked together for the first time in 2017 on an episode of Master of None called Thanksgiving. Directed by Matsoukas, it focused on Waithe’s character Denise and her decision to come out as a lesbian and her family’s gradual acceptance of her sexuality. Waithe, who wrote the episode with her co-star Aziz Ansari, won the Emmy for Outstanding Writing for a Comedy Series – the first black woman to receive the award. Both women wanted to work together again, but it took Queen and Slim to reunite them.

The film’s origins can be traced to a rooftop party in Hollywood in 2015. Waithe was introduced to James Frey, the author who achieved notoriety when it was revealed he had exaggerated and fabricated chunks of his bestselling 2003 memoir A Million Little Pieces. Frey said he had a great idea for a movie – two black people kill a cop in self-defence and drive away – but as a white author he couldn’t write it. “I said, ‘OK, I’ll go write it,” says Waithe. “And I did.” She makes it very clear that Frey may have sown the seed, but the script and the title are hers alone.

The prospect of a hot-button movie by two of Hollywood’s brightest newcomers triggered a bidding war for Queen and Slim. That gave Waithe and Matsoukas considerable leverage when they picked Makeready, an independent studio founded by Hollywood veteran Brad Weston. The filmmakers were given free rein to select their cast and collaborators and even awarded "final cut" – the right to choose the final edited version of the film.

Both women were adamant this would be a black story told by black filmmakers. Waithe even told a reporter she would refuse to take notes from a white person. “That’s right,” she says when I ask her about it. “I didn’t need any notes from a white person to make this movie.” Because it’s a black story? “It’s an American story,” she replies. “But it’s about our experience. What is great is that white people are starting to understand that they should feel uncomfortable trying to tell black stories.”

Matsoukas interjects. “When we’re [black people] able to tell our stories through our lens unfiltered the representation on the screen is completely authentic. You see it in Queen and Slim. When we did the edit we had a few people saying, ‘Queen seems so cold at the beginning – let’s soften her up’. I’m like, ‘That’s a black woman’s way of flirting!’ She’s testing Slim, seeing if he has the endurance to keep up with her and unravel her. It’s a cultural thing.”

The decision to cast a rising star such as 30-year-old Kaluuya would not have been contentious, one assumes. But giving the pivotal role of Queen to Turner-Smith, a virtual unknown, seems much bolder. Matsoukas says she and Waithe were determined to “give the opportunity to a new black actress” and Turner-Smith’s audition made it an easy choice. “Her royalty was immediate – she was Queen. She had a confidence, a stature that is undeniable, but also a vulnerability and joy.”

When the two actors got in front of the camera, their chemistry was evident. “Daniel wasn’t carrying her – they supported each other and elevated each other,” says Matsoukas.

Box office success is important to both women because they know it will open the door for more black filmmakers and more black stories. In a very real sense, their community is relying on them to succeed. “Film is my form of activism,” says Matsoukas, whose immigrant parents always encouraged her to campaign for social justice. “I really enjoy art that challenges the status quo, that has something to say, but is also really entertaining.” With Queen and Slim, she appears to have achieved all her goals.

Queen and Slim opens on March 12.