She had a promising acting career beginning with her role in “Almost Famous” and “New Girl,” but these days, Zooey Deschanel has been relegated to getting bit parts in films and co-hosting “The Celebrity Dating Game” with crooner Michael Bolton. Although Deschanel’s new gig has her helping people get lucky in love, her own love life hasn’t always been the luckiest.

In June 2020, she and her second husband, Jacob Pechenik, finalized their divorce. People reported that Pechenik, who has two children with Deschanel, didn’t file for divorce until October 2019, when she was publicly seen out and about with HGTV host and aspiring actor Jonathan Scott. But her relationship with Scott is far from drama-free — Blind Gossip speculated the two aren’t even “together” but are pretending like they are for publicity and attention! Of course, these are just rumors.

Before all that, though, Deschanel was actually married to someone else — and they were together for quite some time. Here’s everything you need to know about the actor’s marriage to musician Ben Gibbard.

They were a Manic Pixie Dream pair 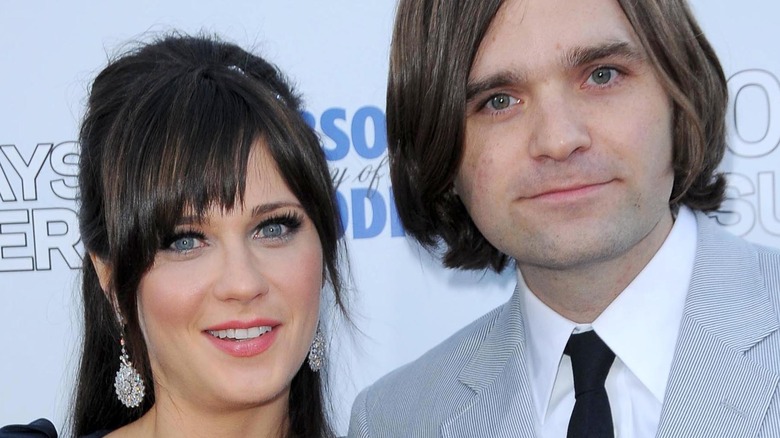 In 2009, Zooey Deschanel and Ben Gibbard announced that they had eloped after only a year of dating. The actor and the Death Cab for Cutie songwriter seemed to be a match made in Xennial heaven, with the Manic Pixie Dream Girl and the indie-rocker guy looking like the perfect testament to many a 90’s baby’s Doc Martens & Delia’s-clad dreams. But alas, that marriage didn’t last either.

In 2012, Deschanel and Gibbard announced that they’d divorced. And their breakup inspired many of Death Cab For Cutie’s saddest songs — something that Gibbard admitted to doing.  “I’m not going to change the way I’ve always written for fear of people correctly or incorrectly assigning a name and face to these songs,” he said to Billboard. “I’ve always written about my life and the lives of people around me, and how everything intersects.” As for a song that might be about Deschanel? Look no further than 2015’s “Black Sun,” which has lyrics like “How could something so fair / Be so cruel / When this black sun revolved/ Around you!”

Fortunately, though, Gibbard found love again: in 2016, he married photographer Rachel Demy in Seattle, and they’ve been together ever since.