Home » Lifestyle » There is no such thing as Australia anymore: the pandemic killed it

It is a tribute to our powers of self-delusion that we managed to celebrate Australia Day this year (or some of us did) with a straight face. This year there has been no Australia, not really – there has been a collection of states and territories acting according to the interests of their populations, held together in loose collaboration, but more often than not, at odds with each other.

Australia Day marks the beginning of the colony of NSW, not the inception of Australia, which did not even exist in the imagination until much later. And at no point in our history have the realities of federation been brought to bear more than during the pandemic. 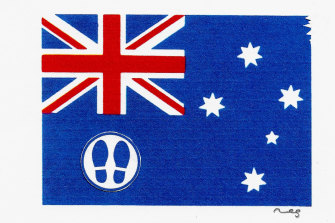 State borders have been closed. State police kept out “foreigners” from interstate. State leaders swiped at each other and acted imperiously to exclude or eject the residents of other states. Often this happened without so much as a courtesy phone call to the leader of the affected state.

Premiers have become our protectors, and their surging political popularity shows how richly voters have rewarded parochialism.

Australians stranded overseas have wondered if their citizenship means anything, given they are effectively barred from coming home, even those with the most compelling compassionate cases.

More astounding than this national lock-out has been the social media abuse stranded overseas Australians have been subjected to, by their fellow Australians.

True nationality is no longer a valid abstract concept, it seems, it’s just a matter of whether you’re in the right place at the right time.

Dr Nicholas Economou, a political scientist at Monash University, says for most Australians the pandemic has offered a crash-course in federalism.

“There’s no doubt that when the states send their police to each other’s borders and restrict the flow of goods and citizens, you get a practical example of how federation works,” he says.

“Up until then most of us had only seen the esoteric side of federalism, like arguments going on at federal level between politicians and bureaucrats about a national curriculum.” 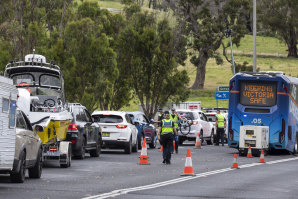 The border checkpoint at Genoa between Victoria and NSW earlier this month. Restrictions are now being eased for entry into Victoria. Credit:Rachel Mounsey

So what happens at the next federal election, when we are forced to lift our gaze beyond state borders, and conceive of ourselves as a nation that needs to decide on a new government?

There is much speculation Morrison will call an election later this year, but despite his popularity in the polls, there is no reason to rush us all to the polls.

Elections are very expensive and very hard to win, even if you’re in government. Not for nothing did Morrison label his 2019 victory a “miracle”.

Whenever it is held, the next federal election will be the first time (unless you count a divisive and painful, for many, Australia Day) since the pandemic when Australia has truly had to look at itself as a whole, as a nation.

The struggle for politicians will be to pull voters out of their parochial torpor.

The pandemic has entrenched us in suburb bubbles, hotspot bubbles, regional bubbles and state bubbles.

Australia as a whole, and the challenges it faces, has fallen on the voterly priority list. We have shown how admirably we can pull together as states, and at a local community level. Can we set our sights higher, to the national level, and confront the big issues we face – our exposure to climate change, the sclerotic government response to it, the transition of our economy to a post-coal future, the inequities in our tax system and the rorts embedded in our superannuation system?

My guess is nothing much will be offered by either party in terms of national vision at the next election.

From the Morrison-led government we will get a “how good is Australia?” simulacrum of one.

The government will (justifiably) campaign on Australia’s excellent handling of the pandemic and what is shaping up to be a solid economic recovery from it.

It will promise more of the same without going into much detail, and without acknowledging the role of the states in heavy-lifting us through the worst of 2020.

Morrison won his “miracle” election on an incredibly bare policy platform, and this time around there is even less electoral appetite for any kind of reform. Nobody wants any sudden moves or big changes.

This leaves Labor with the worst dilemma, even putting aside the serious doubts within caucus that Anthony Albanese is capable of leading them to victory.

The 2019 election loss scared it off putting forward an economic reform agenda of any real heft. The party’s main point of differentiation has to be climate change policy but its internal division on this subject leaves little hope.

It is astounding that Labor won its last outright election victory in 2007, under Kevin Rudd, largely on a promise of real climate action. But since then, it has proven incapable of capitalising on the Coalition’s horrendous bungling of climate policy, even as the world rapidly leaves us behind. The only real action on climate change has been taken by the states acting on their own, in the face of a federal policy vacuum.

Perhaps the biggest challenge both major federal parties will face at the next election will be convincing voters that we need them at all.

MH370 news: What happened to MH370 flight? All the latest updates and theories

9 public-health experts share their own Thanksgiving plans: Most are staying home, but some will gather outdoors with masks