Home » Lifestyle » ‘This is what Shakespeare should be’

The Bell Shakespeare Company opens 2020 with a new production of Hamlet. It’s where they began, in 1990, with John Bell directing and John Polson holding the skull. Now, thirty years on, Peter Evans directs and the skull has been tossed to Harriet Gordon-Anderson. She is a great catch. 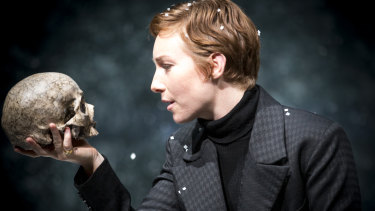 Harriet Gordon-Anderson delivers a virtuoso performance as the Prince.Credit:Brett Boardman

Casting a woman in the role of the Prince of Denmark is at once deeply significant and entirely unremarkable. Gordon-Anderson gives a virtuoso performance of this tricksy character, teasing out the complexities of grief, youth, love and friendship. That she is female and Hamlet is male is, on one level, irrelevant. She’s just the right actor for the job. But, inevitably, as layers of words from Hamlets past, present and emerging drift in the ether, the gender of the actor behind the mask poses questions about masculinity, about men and women and how they can, could, should react and interact to life’s slings and arrows.

For example, why isn’t everyone still sad? Why did everything have to change?

That is Hamlet’s question at the start of this production, as we see the royal family gather in their modish living room, with its 1960s furniture, as cine movies of the young prince at the beach with his mother flicker against a snowy backdrop. As guards patrol outside the heavy black bars of the living room structure, keeping the invaders out (or, perhaps, the family in).

Anna Tregloan’s subtle period references and Laura Turner’s super-8 style video imagery are instrinsic elements of Evans’ insightful reading of the play, creating the sense of nostalgia that, we realise, hangs in the background of every family gathering, every renegotiation between mother and son, friend and friend. And with this all-pervading nostalgia comes the profound sense of cognitive dissonance as Hamlet and the entire family try and fail to make sense of the new relationships which come with Old Hamlet’s death.

The dissonance plays out as a touching mix of vulnerability and defiance in Sophie Wilde’s Ophelia; as bluster mixed with grief in Laertes (Jack Crumlin); from langorous sensuality to slow dawning horror in Gertrude (Lisa McCune); and as obsequious naivety in Rosencrantz and Guildenstern (a lovely double act from Jeremi Campese and Jane Mahady). Tony Cogin and Aanisa Vylet are gloriously weird as players, ghosts and mechanicals. Horatio (James Evans) hovers uncomfortably around the sidelines, an impotent witness. James Lugton, as the malevolent Claudius, is the last character to drop his mask while Robert Menzies, as Polonius, plays the old retainer with an exquisitely mannered lack of self-awareness, which mutates from comic to tragic as the action unfolds.

Above all, it is an ensemble piece, with Hamlet’s soliloquys delivered very much in passing, as a reflective breather between the sword fights, interpretive dancing and laugh-a-minute action. Laugh-a-minute? Yes, this light-footed Hamlet serves its tragedy with generous sides of comedy, which not only keeps us, the audience, entertained but also invites us into the Elsinore fold. So when Hamlet strolls on to the stage after disposing of Polonius’s fresh corpse, we laugh with delight at his "Safely stowed". We’re all in on the joke. We’re all complicit.

This generosity of spirit, this easy sharing of complex emotions is the key to this production’s impact. The cast unpacks Shakespeare’s verse eloquently but without ceremony, without mannerism, making the words their own. And, in so doing, they make new connections, reveal new things about a play we all think we know. This is what Shakespeare should be. Bravi.

Hamlet runs in Sydney until April 4, then tours to Canberra April 11-18 and Melbourne until May 10

Top 10 UFC heavyweights ranked, with Miocic, Blaydes and Ngannou kings of the Octagon