Home » Lifestyle » Toddler, two, loves his dog so much he thinks they are brothers

Boy’s best friend! Toddler, two, is so close to the family dog he thinks they’re BROTHERS – and learned to walk and eat by himself by copying his canine companion

From brushing their hair to reading a bed time story, one little boy’s connection with his pet dog goes further than most.

Their bond is so close that little Jenson Webster, two, from Hinkley, Leicester, sees his Border Collie mix dog, Fenn, as his brother – and mimics him in almost all aspects of life.

Jenson was born on the October 8 2017 – with Fenn being born just nine days later, on October 17 – and strangers are often in awe of the bond – with the pair rarely seen apart.

The family decided initially, to get Fenn as a companion to grow up alongside their son – but they never envisaged how close the two would become.

From playing fetch and completing tricks, Jenson’s milestones were all met – even if they weren’t the most traditional. 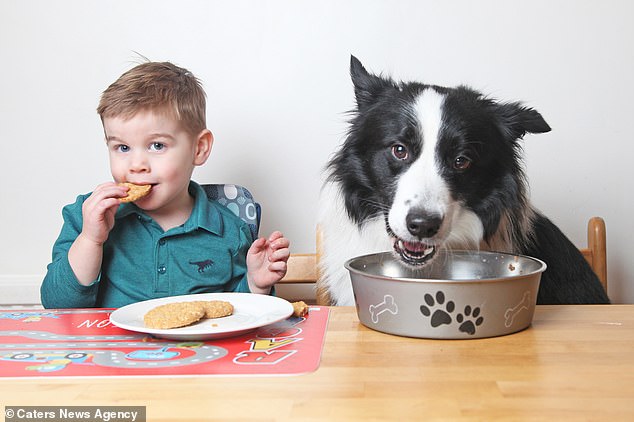 Jenson Webster, two, from Hinkley, Leicester, sees his border collie mix dog Fenn, as his brother – and mimics him in almost all aspects of life (pictured) 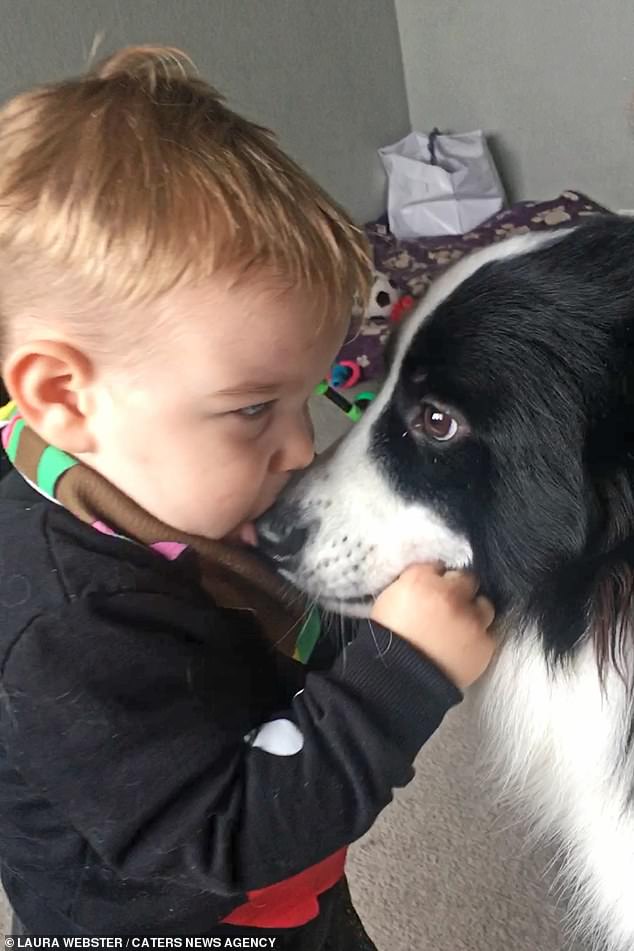 Jenson and Fenn (pictured) were born nine days apart and have shared a special bond ever since, Jenson’s mother Laura Webster said

Stay-at-home mother, Laura Webster, 29, was even able to teach Fenn to crawl in order to show Jenson what to do – with Jenson crawling at seven months and then walking by eight.

Yet little Jenson was already showing he could keep up with his furry pal, listening to orders such as sit and heel round – as well as attempting to eat by himself – just like Fenn.

Astounded mother, Laura remains amazed at their bond as it’s continued to grow, and along with her partner, Tom Webster, teaching assistant, 30, the family believe that the bond between the two is unique.

Laura said: ‘They are, simply put, siblings – it’s impossible not to love them and their amazing bond. 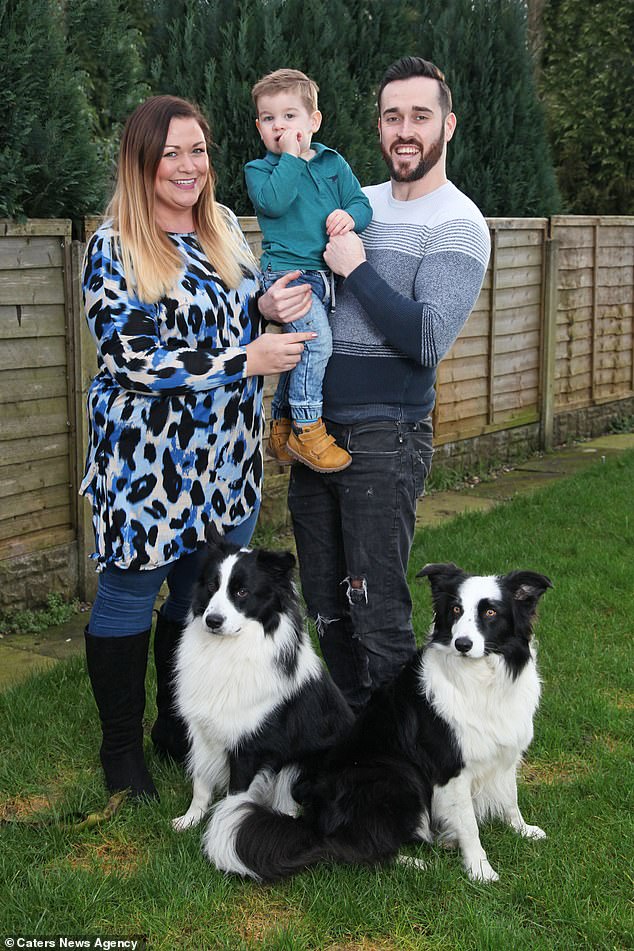 Pictured: Laura and her partner Tom Webster, with Jenson and their two Border Collie mixes Fenn (left) and Nova (right) 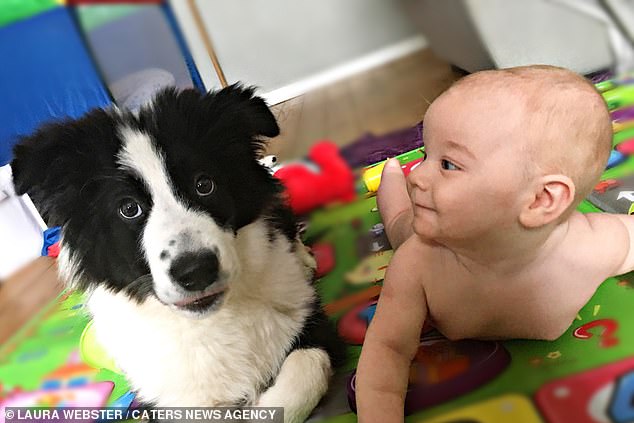 Pals since birth. Laura explained that Fenn and Jenson supported each other throughout all their milestones, from learning to crawl to eating aone

‘Fenn and Jenson were born nine days apart and they’ve literally grown up together – Jenson is recognised as the leader, but he’s decided to copy Fenn when he’s been learning things.

‘From eating food from the plate, just like Fenn would, he also joins him in learning tricks like sit, heel round.

‘They do the morning and night routine together – if Jenson is having his hair brushed, ready for the day ahead, then Fenn has to have his done too. 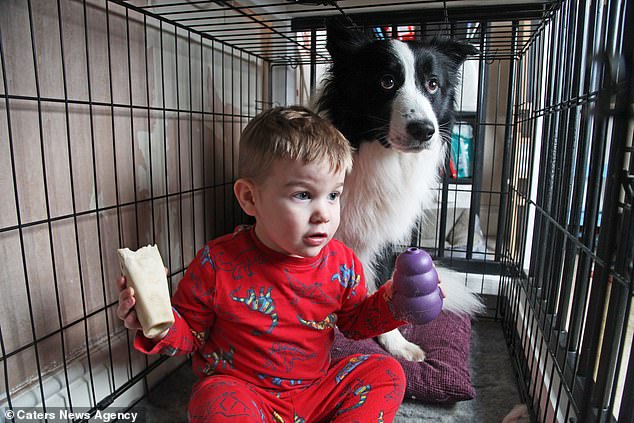 Jenson and Fenn (pictured in the dog’s cage) are inseparable and play fetch together. Laura revealed Jenson had learn to answer the command ‘sit’ just like his pooch 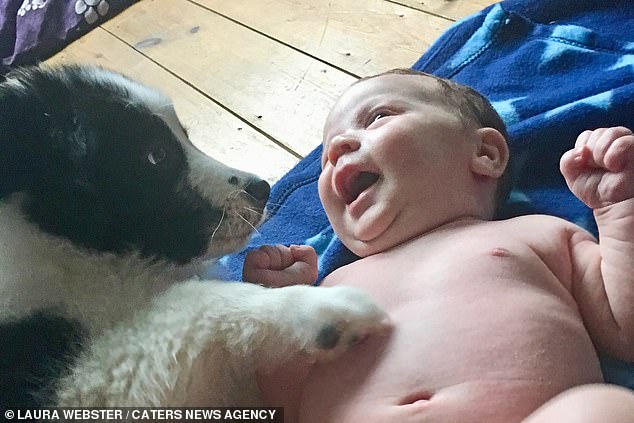 The pals hanging out in their first months of life. Laura said the pair even brushed their teeth together and watched TV together

‘They’ll brush their teeth together, watch TV together with Jenson lying on top of Fenn, and every walk you’ll find Jenson there, right alongside Fenn.

‘Jenson has no human siblings and Fenn became his substitute – they’re best friends and completely inseparable.’

The family even managed to capture the pair catching snowballs in their mouths, which went viral and was seen by 60,000 people. 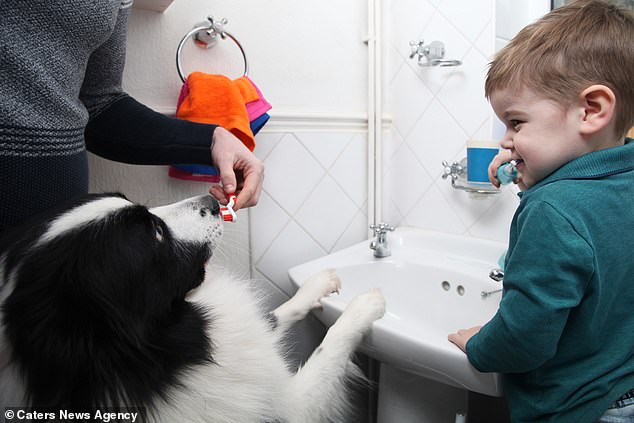 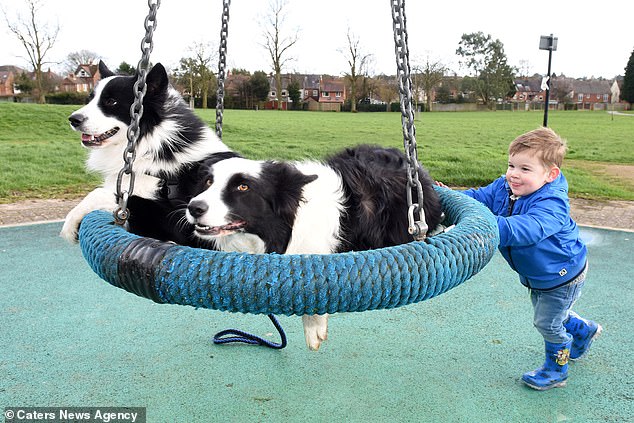 Laura and Tom do not worry about Fenn, but had to teach Jenson that not all dogs are as friendly as his bestie (pictured: playing with Fenn and Nova)

‘My dad and Jenson’s grandad, Steve Marlow, 64, is retired and came over to show Jenson the snow – he’d never seen it before.

‘Dad began to throw the snowballs for Fenn, and our older dog Nova to catch, and to our delight, Jenson tried the same.

‘He seemed shocked because it was so cold when he caught it in his mouth. 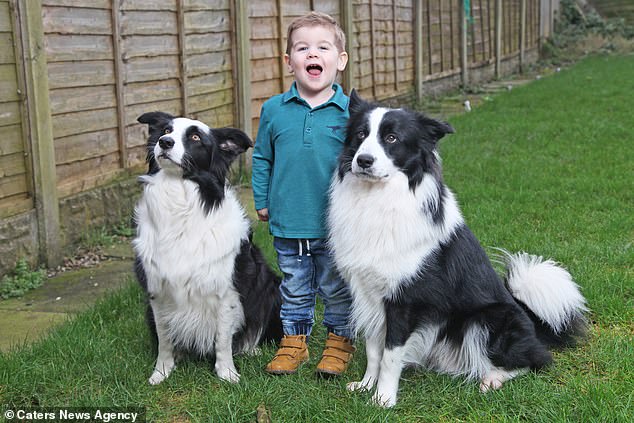 Jenson loves Fenn so much, he mimics his every move, including catching things with his mouth (pictured with Fenn and Nova) 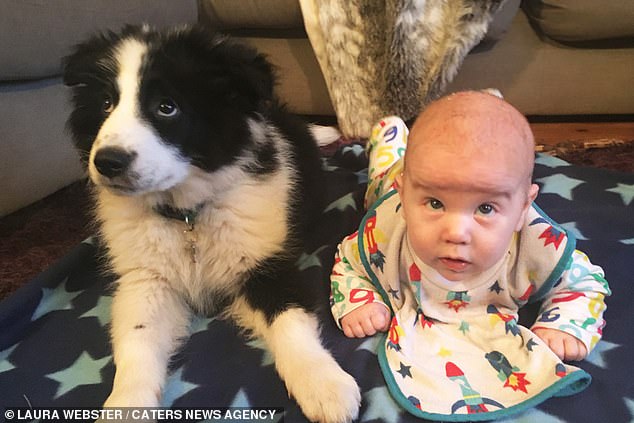 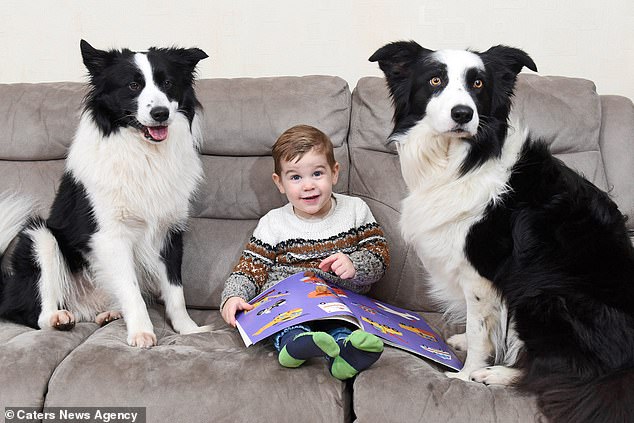 ‘He does the same with bubbles, he makes sure to mimic Fenn, and it does make us laugh, and brightens everyone’s day.’

Yet being so close does have its drawbacks as Laura often has to prevent Jenson from making friends with all dogs that he meets.

Laura added, ‘We know we can trust Fenn 100 percent, but we’ve had to make sure Jenson doesn’t go running up to every dog, thinking they’re all going to be like Fenn.

‘What he and Fenn have is so unique and special, we know we’re lucky to have it – our little boy really does have a furry sibling!’ 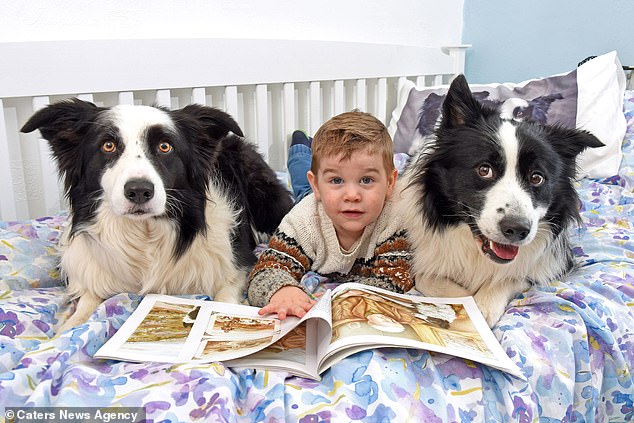 Reading time! The pair share all their time together, and older dog Nova (left) loves to join as well 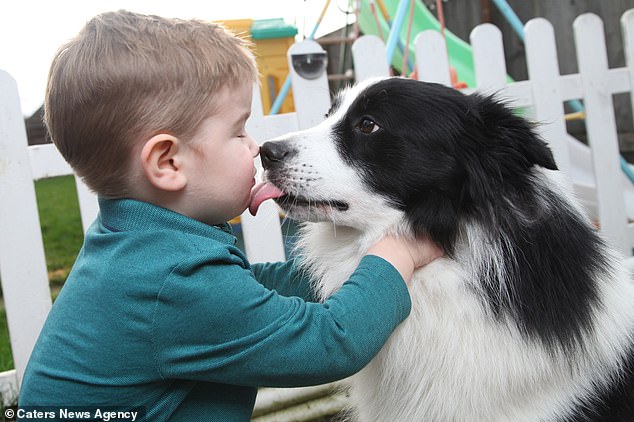 Pooch’s kisses. Laura explained she got Fenn as a companion for Jenson, but never envisioned them getting so close

The 411: 'Clueless' inspired cosmetics have arrived

Spoilers: Bea and Harlow die in Neighbours as Finn traps them with a snake?