Australia has banned non-essential gatherings of 100 or more people indoors as it declares a human biosecurity emergency.

Prime Minister Scott Morrison said the states will be tasked with implementing the restrictions on social gatherings. The ban is effective immediately. 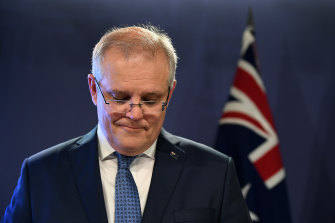 Restaurants, pubs, bars, sports clubs, RSLs and other venues are all set to be hit with the ban.

"The health advice is that schools should remain open,” Mr Morrison told reporters in Canberra.

"I am telling you that, as a father, I’m happy for my kids to go to school. There is only one reason your kids shouldn’t be going to school and that is if they are unwell."

Mr Morrison said the international evidence showed the coronavirus did not present as much of a health risk to younger Australians and there were concerns that it could be passed onto their grandparents if they were asked to take care of children. He said the economic consequences of shutting down schools would be significant.

"The disruption that would occur from the closure of schools around this country, make no mistake, would be severe,” he said. “What do I mean by severe? Tens of thousands of jobs could be lost, if not more.”

Mr Morrison said aged care facilities must reduce the risk of transmission to residents, including limiting visits to a short periods and a maximum of two visitors at one time per day.

"Visits should be conducted in a resident’s room, outdoors or in a specific area designated by the facility, rather than communal areas where the risk of transmission to other residents is greater," he said.

"There should be no large group visits or gatherings. Including social activities or entertainment to be permitted at this time.”

Mr Morrison said Australia's travel ban had been lifted to level four for the entire world.

"That is the first time that has ever happened in Australia’s history," he said. "The travel advice to every Australian is 'do not travel abroad'. Do not go overseas. That is very clear, that instruction. For those who are thinking of going overseas in the school holidays, don’t go overseas."

The national security committee declared a human biosecurity emergency on Wednesday, giving the government the power to enforce quarantine measures.

“It won’t look like it normally does but it is very important that we continue to put in place measures that are scalable and sustainable.”

Mr Morrison said Australia should prepare for “at least six months” of disruption as health authorities attempt to get on top of the coronavirus.

“The idea that you can just turn everything off for two weeks and then turn it all back on again and it all goes away, that is not the evidence,” he said.

The Prime Minister reiterated that for most Australians, the illness would be mild, but the for the more vulnerable, for the elderly and those who have other health challenges, “this is a far more serious condition for them”.