Truck driver Phil Carey has hauled food all over Australia for 25 years, and knows truckies aren’t always among the nation’s most-loved figures.

“We don’t get much recognition. We get blamed for the bad things but never for the good things we do – like putting food on people's table," he said. 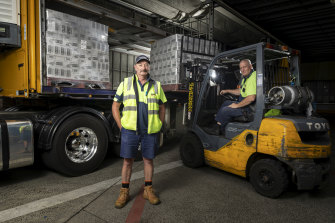 This week though, with coronavirus seeing Australians face the shock of bare supermarket shelves for staples for the first time in living memory, truck drivers’ importance is being recognised like never before.

“People are now appreciating what we do,” said Mr Carey, who works for the Glen Cameron Group. Its 700-plus fleet of trucks is now moving food for Woolworths and Aldi, which it doesn’t normally deliver for. The surge in demand has seen them take on the extra work.

The chief executive of another trucking company, 76-year-old Ron Finemore, says his company’s fleet of 250 prime- movers is handling more produce than he has seen during his 59 years in trucking. “It’s like 10 days of Christmas happening all at once,” he said.

With panic buying gripping the nation's supermarkets, food experts and truck companies delivering to Australia’s massive food distribution centres say there is more than enough produce to feed the nation during the pandemic.

But they warn that getting it to supermarkets could challenge the nation’s fragile just-in-time transport system – especially if one or more of Melbourne and Sydney’s enormous distribution centres or wholesale fruit markets shuts due to an infection.

“If coronavirus was introduced to one or more of those centres it would have a ripple effect,” said the Victorian Transport AssocIation's Peter Anderson. “If a warehouse goes out and someone gets a cough, how do all of the shops get supply when that warehouse is shut for three days? We must avoid this at all costs.”

While the shutdown of one or more distribution centres was a vulnerability, food experts say Australia’s massive capacity to feed itself remains the country’s biggest strength.

Australia exports about 70 per cent of what the nation grows.

“Empty supermarket shelves don’t mean Australia is suddenly incapable of feeding itself. We can, many times over, better than most countries on earth," said Deloitte Access Economics economist Daniel Terrill.

This meant the panic buying of rice, pasta, flour and other pantry staples was totally unnecessary for all but the most vulnerable, he said.

“Australia produces more than enough food for our own needs – we produce a lot more than we consume. What the supply chain can’t handle is many people buying many months of food at once. No supply chain can handle that.”

Dr Terrill, who lead’s Deloitte’s national agribusiness practice, said Australia was self-sufficient in most types of meat “by a considerable margin”. 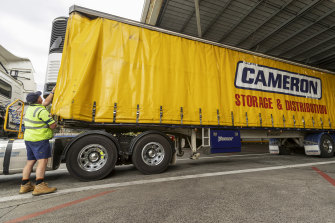 Phil Carey carries out checks on a Cameron truck.Credit:Daniel Pockett

“We’re typically not as good at [processing] as we are at primary production. But the vast majority of foods consumed here are grown here.”

He said pasta, rice, flour, breakfast cereals, bread, were all produced in Australia in vast quantities, and while non-perishable long-life milk was “now in short supply because of panic buying, fresh dairy products were similarly in abundance in Australia”.

And he said recent rains – which many outside the farming sector had not noticed – had given confidence to farmers it would be a good year ahead. Dr Terrill said the risks lay in supply chains. “Even though we are producing food, we might not get it into our homes as easily.”

Melbourne University food systems lecturer Rachel Carey has spent five years researching what’s grown immediately outside Melbourne, with her Foodprint project establishing that almost half of the state's vegetables grow on or near the city’s fringe. They include highly-perishable foods like leafy greens, asparagus and berries. Also grown nearby are eggs and chicken meat.

Dr Carey said Victoria was a major exporter of dairy, meat, grains, fruit and nuts. “That surplus becomes a buffer for shocks like a pandemic.”

Harvests being done right now included apples, pears, eggplant and tomatoes, and Victoria was immensely fortunate to have such long growing seasons compared to countries like Canada, Dr Carey said. "The Mornington Peninsula, they are growing almost all year."

She said the stockpiling of food by so many Australians was “an understandable response”, but it was clear the shortages were in deliveries to stores, not in produce.

Dr Carey warned as the virus spread through the community shortages could develop due to not enough farm labourers being available, and workers needing to self-isolate.

And there is a possibility that, as a result of the many processed foods that Australia imports becoming more scarce, Australians could eat more fresh food than before – leading to some health benefits from the pandemic for some.

“Our imports are mainly of processed foods rather than fresh … confectionery and soft drinks, for example, the sorts of foods we might benefit from consuming less of.”

Dr Carey said the bigger risk right now was those on low incomes not being able to afford food.

“If you don't have enough money to buy food you're going to be in trouble even when the supermarket shelves are full.”

Truck company owner Ron Finemore said the demand surge of recent weeks had shocked transport firms – which spent months planning periods like Christmas. “It’s just impossible to handle these surges without having been able to plan for it.”

“In our industry, putting on extra shifts isn’t easy. People have to be trained, inducted and know what they are doing. A truck driver is highly skilled, and the key part of this is keeping the community safe.”

Mr Finemore hoped one realisation that came out of the pandemic was the importance of local food production and transport.

He also hoped people appreciated the work truck drivers were doing. “Our people are doing a fantastic job under a lot of pressure.”