Home » Lifestyle » UFC 1: The Beginning: Playboy, Mortal Kombat and the hunt for an ultimate fighter

Twenty-five years ago, one man set out to answer the eternal question: “Who is the ultimate fighter?”

Little did Art Davie know a concept forged via Playboy Magazine, a handful of Hollywood hard men and a popular arcade game would turn into a multi-billion dollar industry.

On 12 November 1993, Davie and associates hosted “the street fight to end all street fights”, as eight fearless competitors from across the world gathered in a Colorado octagon to see who was the toughest.

This is the story of UFC 1: The Beginning. 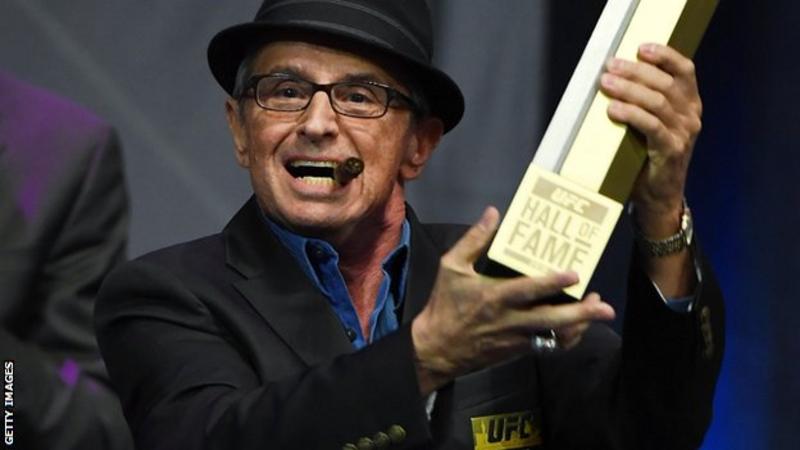 An article in Playboy Magazine in September 1989 proclaimed its subject to be the “toughest man in the United States”, a man who had offered to fight anyone in the country for a winner-takes-it all $100,000 prize.

Just the kind of guy Davie, a former car dealer who used to star in his own commercials by jumping off buildings and getting set on fire, was looking for.

Since he was a kid interested in boxing, Davie had been obsessed with wanting to find out who the best fighter in the world was and which style was most effective.

He set about immersing himself in the history of fighting and discovered the Ancient Greek sport of Pankration, which used a mix of boxing and wrestling techniques.

“I had history behind me, for 1,041 years it had been in the Olympics. I was simply bringing back the glory of the ancient world,” Davie told the 30 for 30 Podcast.

During his research Davie, a former high school roommate of US President Donald Trump, was made aware of the Playboy article and sought out the man in question – Rorion Gracie.

Born in Rio de Janiero, Gracie had moved to California in the late 1970s to demonstrate the Brazilian jiu-jitsu taught by his father, and inspired by a travelling Japanese master, was superior to all others, labelling his fight offer the “Gracie Challenge”.

Davie made his pitch, and Gracie was sold.

Gracie had already enjoyed a taste of on-screen fighting after preparing Mel Gibson for 1987 film Lethal Weapon, but for he and Davie to make the tournament a success they needed to attract a pay-per-view provider.

Despite HBO and Showtime turning down their pitch for a ‘War of the Worlds’, the concept hooked Semaphore Entertainment Group (SEG) executive producer Campbell McLaren, who likened it to a real-life version of popular video game Mortal Kombat.

“There’s a story in this event, there’s a hook, there’s a drama, there’s a danger,” said McLaren, in the documentary Fighting for a Generation.

It was game on. 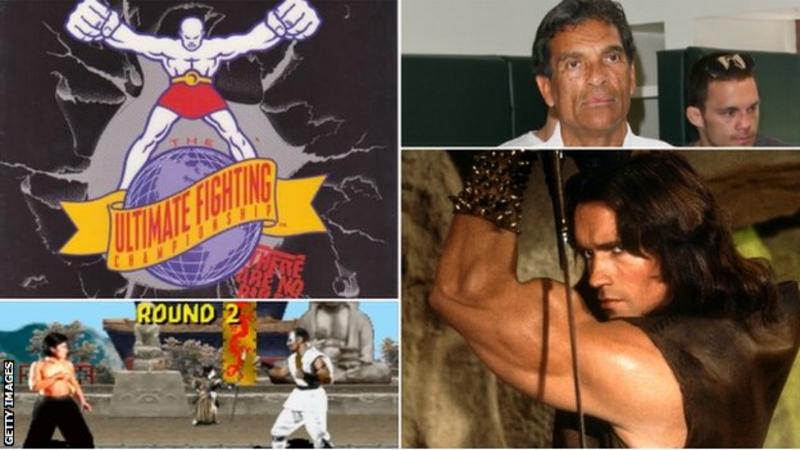 While the organisers set about creating the tournament – deciding to call it Ultimate Fighting Championship, because War of the Worlds was “too science-fictiony” – Davie stumbled across a loophole in Colorado law that meant bare-knuckle fighting was permitted in the state.

But as promotion for UFC 1 gathered pace with the marketing slogan “there are no rules”, so did the opposition to it. Senator John McCain wanted it banned and branded the concept a “human cockfight”.

Davie, Royce and McLaren knew they needed a “shock” factor to generate interest, and were busy throwing ideas around for how the stage would be set for the fighters – an arena with sharks? A moat with alligators? An electrical fence?

They opted for an octagon-shaped cage, suggested by Conan the Barbarian director John Milius – because Conan, played by Arnold Schwarzenegger, battles in a stone octagon. Schwarzenegger liked the idea, as did fellow Hollywood tough-guy Jean-Claude Van Damme.

“Van Damme was very cool,” McLaren told Maxim, admitting martial artist-turned-actor-turned-producer Chuck Norris was “not so cool”, questioning whether it was even legal.

“He was badmouthing it. He didn’t want to be involved, he thought it was bad for the martial arts.”

This won’t take long. There were no rules.

Well, actually, there were a couple – albeit the tournament was sold on the idea there were none – no biting and no eye-gouging. Oh, and no fish-hooking, as the only response to this was biting, and fighters had to be bare-fist, and they couldn’t wear shoes if they planned to kick people.

This didn’t sit well with the assembled mix of fighters. No rules meant no rules, right? It almost sparked a brawl in the pre-tournament meeting, until Teila Tuli smoothed things over.

Tuli, a Hawaiian sumo wrestler who had been banned from competing in Japan for pushing a journalist, told the others: “I came here to party. If any of you came here to party, I’ll see you in the arena tomorrow.” 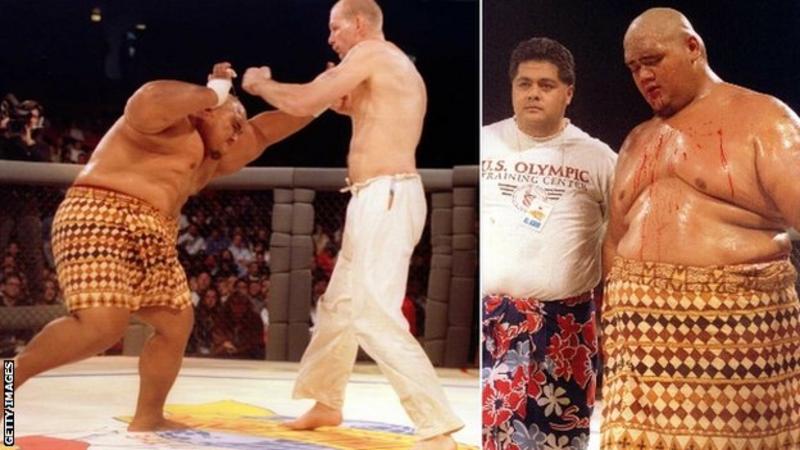 About 7,000 spectators turned up at the McNichols Sports Arena in Denver to witness the action live, with a further 86,000 tuning in on pay-per-view – three times what the promoters anticipated – and many more heading to their local video store to rent the tournament on VHS in the aftermath.

Twenty-six seconds into their viewing experience, they saw a tooth whistle past the judges after being knocked from the mouth of Tuli.

The sumo actually lost three teeth during a kick to the face from Gerard Gordeau, but two of them remained lodged in the Dutchman’s foot.

Gordeau also left the octagon with a broken hand after following up his roundhouse kick with an uppercut to head of Tuli, whose optimistic early charge across the canvas towards the savate world champion ended with him being dragged to the ground.

The suddenness and violence of that opening bout left even the organisers stunned, and thirsty for more.

All bar McLaren and CEG, that is, who had three hours of live pay-per-view television to fill and feared if the fights carried on at that rate the tournament would be over in little more than 10 minutes.

McLaren needn’t have worried. It might have been less clinical, but the second bout was as gruelling as the first had been explosive as kickboxer Kevin Rosier and American Kenpo Zane Frazier fought it out for four minutes and 20 seconds.

It was violent and chaotic, with knees and elbow strikes complemented by hair pulling and groin attacks, before Frazier’s wife threw in the towel after he was knocked down with blows to the back of the head and stamped on.

Frazier, a former bodyguard for Stevie Wonder, had asthma and was rushed to hospital following the bout after suffering respiratory failure.

“The paramedics saved my life,” said Frazier in 2011, adding that he was diagnosed with asthma after the bout and told he would never compete again – he eventually retired 15 years later. 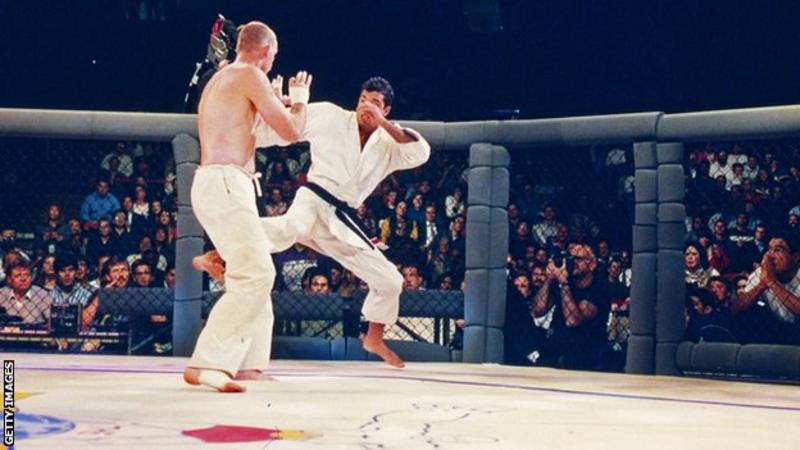 Now, remember there was a Brazilian jiu-jitsu among the competitors? And that Rorion Gracie introduced the sport to the United States and challenged anyone to a winner-takes-it all $100,000 fight? Well, he put forward his brother, Royce.

Rorion said entering Royce would “prove a point jiu-jitsu was for anyone… that it can do wonders for the little guy”, while Royce was keen to establish himself in the fighting arena.

Royce was drawn against boxer Art Jimmerson in the quarter-finals and swiftly floored the cruiserweight, who wore one glove for the fight, with a double-leg takedown. Royce mounted Jimmerson, headbutted him and forced him to tap out.

“I’d never heard of Royce, I’d never even heard of jiu-jitsu. I never imagined I would be wrestling a guy on the floor,” said Jimmerson.

McLaren added: “I was sure Royce was going to get his head knocked off his body by that boxer – and I thought Teila was going to slam everybody into the chain link fence and smoosh them – so that’s how much I knew!”

Royce said the bout was “almost unfair”, adding: “The stand-up fighters had almost no idea what to do on the ground.”

The other fight of the round took place between the Captain America-esque Ken Shamrock, listed as a shootfighter, and taekwondo representative Patrick Smith.

“This thing, the UFC, it was almost like who could beat me?” quipped Shamrock, who quickly submitted Smith with a heel hook.

An Ultimate Fighting Champion is crowned 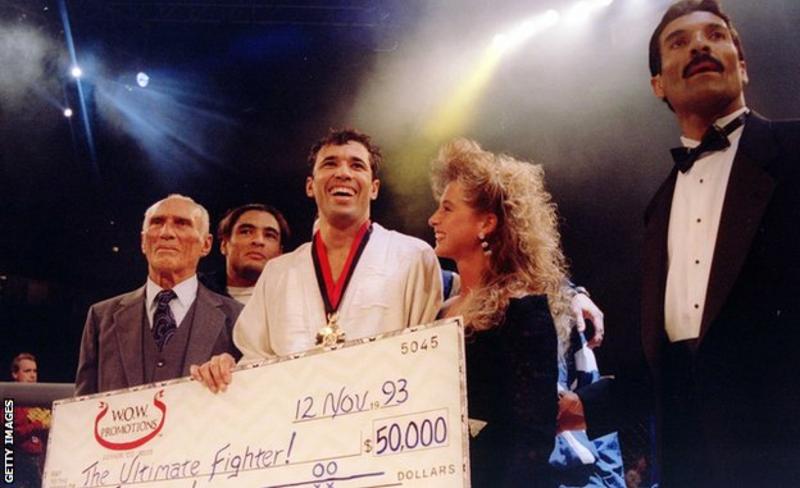 Shamrock’s armoury was made up of a mix of disciplines, but in the semi-final he came up against Royce and the Gracie family who claimed to have “the” best fighting style.

The fight lasted less than two minutes, Gracie managing to engineer a choke using his uniform and Shamrock bemoaning his lack of grip having been banned from wearing shoes.

“I’m sorry I didn’t give him a good enough fight,” said Shamrock after the fight, later admitting he would never head into a contest with such arrogance again.

He may have lost the bout, but Shamrock would go on to become a UFC champion, be labelled “The World’s Most Dangerous Man” by ABC News and feature in the WWE.

Royce, meanwhile, headed into the final unscathed having yet to be really tested. Gordeau, with a broken bone in his hand and pieces of tooth still in his foot, awaited him.

The final lasted one minute and 40 seconds, with Gordeau at first managing to stand firm before being grounded by Royce. There was an alleged bite from the Dutchman, but Royce was able to land strikes and headbutts before submitting Gordeau with a rear naked choke hold.

Royce, and the Gracies, were victorious. “I had to prove to my family I was a fighter,” said the champion, who declared after the bout he would use the $50,000 prize to go to Disneyland.

As for Rorion, he was delighted. And satisfied Brazilian jiu-jitsu produced “the ultimate fighters”.

“It was like a Cinderella story, it was beautiful,” he said. “I proved my point, that’s for sure.”

Lung cancer warning: The cough you should never ignore – especially if it includes blood