Qantas' decision to stand down two-thirds of its workers and make them use up leave to preserve jobs has been backed by Industrial Relations Minister Christian Porter as a "good model" for navigating the coronavirus crisis but criticised by unions.

Just a day after the federal government unveiled a $715 million rescue package for Australian airlines, Qantas said it would temporarily stand down the bulk of its 30,000-strong workforce later this month. Most are not expected to return to work until late May. 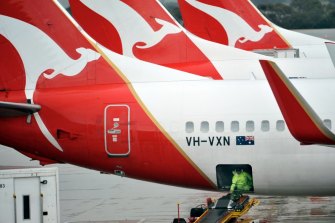 Qantas will stand down two-thirds of its 30,000 workforce as the travel industry suffers through the coronavirus pandemic.Credit:Joe Armao

Qantas chief executive Alan Joyce said it was a "terrible day" but the airline could not afford to pay all its staff while most of its planes — including all those on international routes — weren't flying.

To help reduce the company's $4.3 billion annual wage bill, affected staff members will have to take leave, including long service leave built up over years, and those without it will be advanced annual leave at half pay. When workers' leave runs dry, they will go unpaid.

Mr Porter said the use of workers' entitlements to manage costs showed how businesses and employees could work together to safeguard jobs in the long term.

"It is an unfortunate reality that this will not be the only announcement of this type we see from major Australian companies affecting large groups of employees," he said.

But Transport Workers Union national secretary Michael Kaine criticised the airline for using workers' entitlements rather than its own reserves to cope with the downturn.

"The brunt of this crisis has been pushed onto workers," he said.

Qantas, which will ground its entire international fleet from late March, disputed the union's claim, noting it would still have to pay fixed costs while its planes were out of action, had cancelled a share buyback and cut directors' pay.

Airlines worldwide are struggling with plummeting demand as countries close their borders to try to contain the spread of the virus.

Deputy Prime Minister Michael McCormack on Wednesday announced the government would waive more than $715 million in fees and industry levies, including an upfront $159 million refund of charges.

The Australian Council of Trade Unions and the Australian Services Union, which represents staff in Qantas' corporate office, questioned where the government's money was going and if it was enough.

"In this case, $715 million has been allocated and the companies appear to have been given free rein on how they use taxpayer money," ACTU president Michelle O'Neill said.

A Qantas baggage handler who asked not to be named because of the company's media policy said he had not been told yet whether he would have work. "They're very worried, especially the ones with families and mortgage payments," he said of his colleagues.

The United Workers Union, which represents airport security guards and cleaners, said the downturn in flights had already hit contractors who relied on the aviation industry, which employs about 93,000 people.

A Qantas spokeswoman said despite the public stoush, it had spoken constructively with unions about ways to help workers. It was also talking to retailer Woolworths about securing employment for some Qantas staff while the country rides out the downturn.

Virgin Australia chief executive Paul Scurrah has written to the prime ministers of Australia and New Zealand and state and territory leaders to offer some of his 10,000 staff for roles governments might require. More than a third of Virgin's planes are grounded and it has admitted some redundancies are inevitable.

With Tom Rabe and Patrick Hatch

Is Meghan Markle Always Trying to Steal the Spotlight From Princess Eugenie?