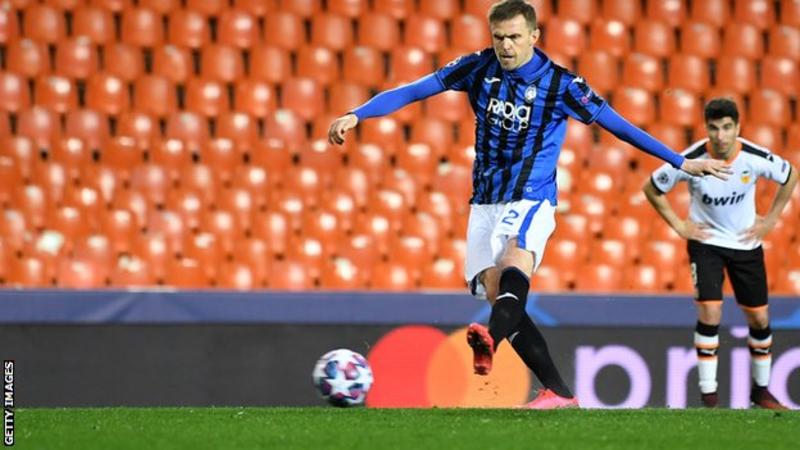 Atalanta eased into the Champions League quarter-finals as Josip Ilicic hit four goals against Valencia, in the first match of the competition to be played behind closed doors because of the coronavirus outbreak.

The Italians arrived in Spain with a commanding 4-1 lead from the first leg of their last-16 tie and quickly added to their advantage inside an eerie Mestalla Stadium.

With the chants of a large gathering of home supporters outside the ground clearly audible, Slovenia forward Ilicic converted a third-minute penalty for the Serie A side after he had been fouled by Valencia defender Mouctar Diakhaby.

And while Kevin Gameiro capitalised on a defensive mix-up to tap in an equaliser for the hosts, Diakhaby’s handball allowed Ilicic to score his second spot-kick of the evening to put the visitors 6-2 up on aggregate.

A second Gameiro goal, this time from a close-range header, levelled the score on the night before Ferran Torres’ lobbed effort put the La Liga side in front.

Ilicic’s fourth, a left-foot effort into the top left corner, rounded off an 8-4 aggregate win on a fine evening for Gian Piero Gasperini’s side, who have now scored 28 goals in their last seven games and become the competition’s first debutants to reach the last eight since Leicester City in 2016-17.

When referee Ovidiu Hategan blew the full-time whistle it was noticeable that you could hear the Atalanta players celebrate a first appearance in the last eight of Europe’s elite club competition.

But then almost every noise throughout the encounter could be heard, including Hategan’s warnings to Valencia goalkeeper Jasper Cillessen to stay on his line before he faced both of Ilicic’s penalties.

The decision to play the match in an empty stadium came after Spain’s health ministry announced it wants to avoid “large gatherings of fans” in an effort to contain the spread of coronavirus. 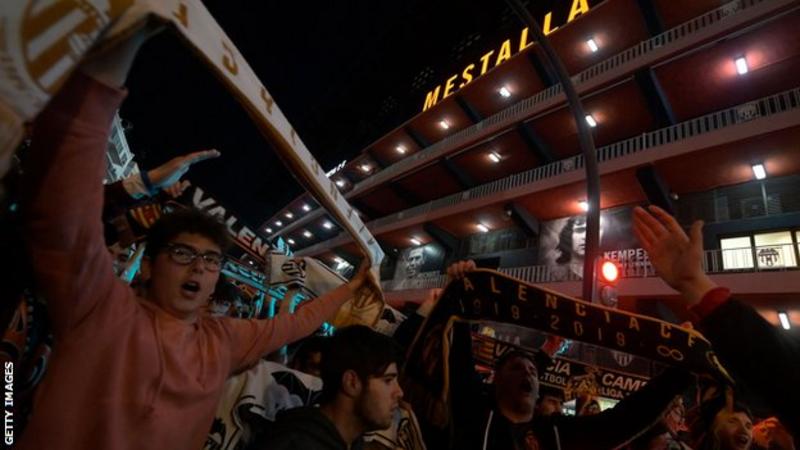 Valencia themselves had announced on 28 February that they were suspending all non-sporting activity with the club’s first-team players, after a journalist who attended the first leg of this tie had contracted coronavirus.

And it provided a curious backdrop to a knockout tie in the Champions League, which was further heightened by both sets of players seemingly unaware of what to do once the starting theme tune had finished, having dispensed with the traditional pre-match handshakes.

Overturning a 4-1 deficit from the first leg in Italy was always going to be difficult assignment for Valencia and while fans outside chanted their support, the Spanish side were unable to threaten a comeback in front of an empty stadium.

Attempt saved. Kevin Gameiro (Valencia) left footed shot from the centre of the box is saved in the bottom left corner. Assisted by Ferran Torres with a through ball.

Attempt missed. Duván Zapata (Atalanta) right footed shot from the centre of the box is too high.

Gonçalo Guedes (Valencia) wins a free kick in the defensive half.

Attempt saved. Ferran Torres (Valencia) right footed shot from a difficult angle and long range on the left is saved in the top centre of the goal.

Remo Freuler (Atalanta) is shown the yellow card for a bad foul.

Denis Cheryshev (Valencia) wins a free kick in the defensive half.

Attempt missed. José Gayà (Valencia) left footed shot from the centre of the box misses to the right. Assisted by Kevin Gameiro.

Daniel Parejo (Valencia) wins a free kick in the defensive half.

Duván Zapata (Atalanta) wins a free kick in the defensive half.

Gonçalo Guedes (Valencia) wins a free kick in the attacking half.

Attempt saved. Duván Zapata (Atalanta) right footed shot from the right side of the box is saved in the bottom left corner. Assisted by Hans Hateboer.

José Luis Palomino (Atalanta) wins a free kick in the defensive half.

Goal! Valencia 3, Atalanta 2. Ferran Torres (Valencia) right footed shot from outside the box to the centre of the goal. Assisted by Daniel Parejo with a through ball following a fast break.

Duván Zapata (Atalanta) wins a free kick in the attacking half.

Daniel Wass (Valencia) is shown the yellow card for a bad foul.

Efforts to protect giant pandas have not helped large carnivores