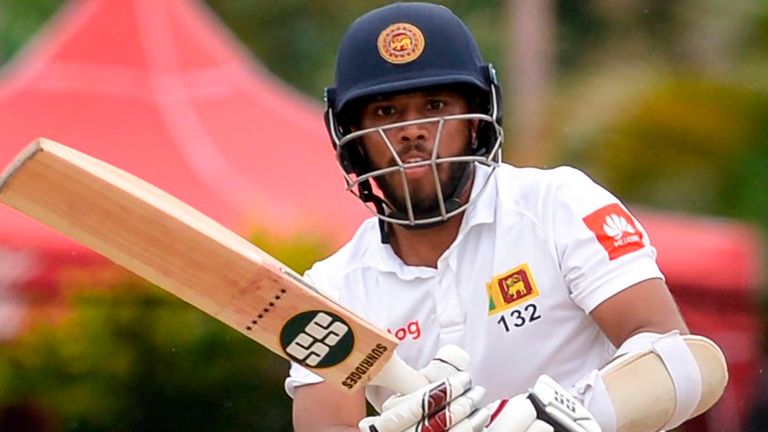 Sri Lanka made an impressive start to the second Virtual Test in Colombo as England’s spinners failed to exercise the desired control on the first day.

In conditions expected to favour the slower bowlers, it was Sam Curran (3-54) and the evergreen Stuart Broad (2-79) who led the line, sharing all the wickets to fall as Sri Lanka ended the day on 281-5. 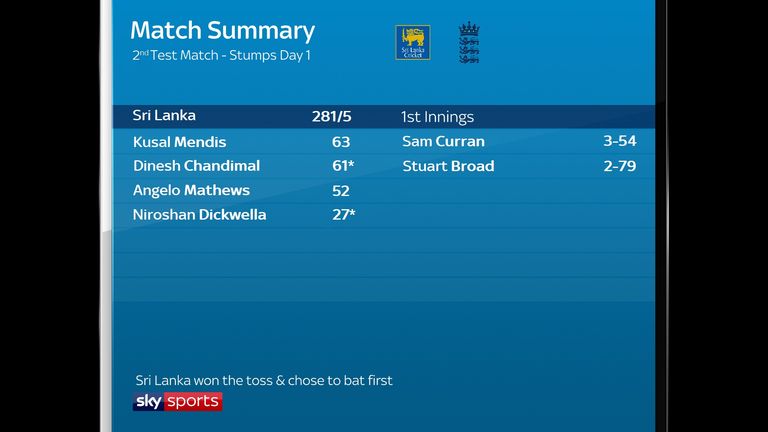 Sky Sports statistician Benedict Bermange is using a cricket simulation that takes into account batting averages, strike-rates, bowling averages and bowling speeds and plays out a five-day Test match based on those figures.

That score represents a decent recovery from the shock of losing both their openers in the first hour of play.

Oshada Fernando could not repeat his first Test heroics as he edged Broad to Jos Buttler for just 16 and it was soon 42-2 when captain Dimuth Karunaratne played on to Sam Curran via the inside-edge.

However, any hope of England – 1-0 up in the two-match series – pressing home the advantage was soon extinguished by an excellent third-wicket partnership of 113 between Kusal Mendis (63no) and Angelo Mathews (52).

Sri Lanka won the toss at Colombo in the Second Virtual Test and chose to bat. England's seamers removed both openers in the first hour but Mendis and Mathews were solid as the hosts lunched at 94/2 pic.twitter.com/9Spf7tZh3U

Both batsmen produced the perfect combination of watertight defence combined with an ability to punish the bad ball when it came, and it did all too often.

The afternoon drinks interval clearly came at the wrong time for Mathews, who lost concentration three balls later and was bowled through the gate by the persistent Broad. He will be disappointed as he rarely looked troubled, and will have to wait to add to his tally of 10 Test centuries.

It's tea time at the Premadasa, and Sri Lanka have moved on to 184-4. Both Kusal Mendis and Angelo Mathews made half-centuries, but were unable to convert to three figures. A crucial third session lies ahead with Chandimal and Kusal Perera at the crease. pic.twitter.com/TrC9xyCfuM

Mendis stroked his way to a fluent fifty, reaching his half-century from 85 deliveries, and he was especially hard on Dom Bess, who frequently dropped short and was unable to sustain the pressure he exerted so well in the opening Test at Galle, when he claimed nine wickets in the match.

With Mendis’ score on 63, he was beautifully deceived by a Curran in-swinger, to which he offered no shot. It was the perfect set-up from the left-arm seamer, whose first three deliveries of the over had all moved away from Dinesh Chandimal (61no). 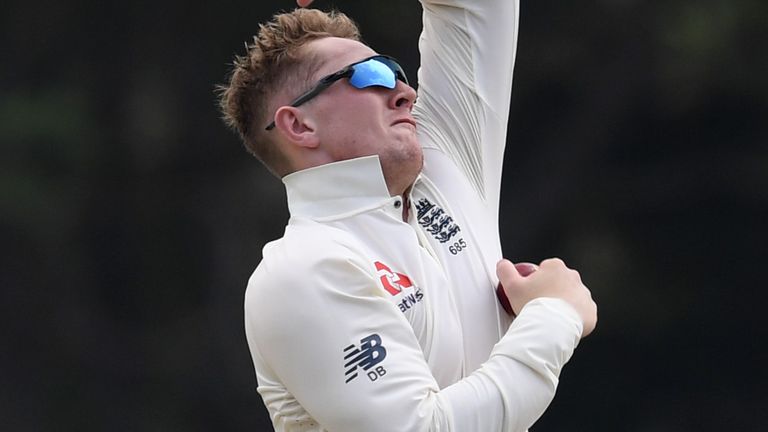 Mendis would have expected the fourth ball to do the same, before he saw to his horror that it had flicked the off stump.

Kusal Perera’s frenetic innings came to an end on 22 when Dom Sibley snapped him up at cover from a sliced drive again of Curran.