Halsey (real name Ashley Nicolette Frangipane) is opening up about her pregnancy — and her pregnancy cravings. The singer announced back in January that she was expecting her first child with her boyfriend, Alev Aydin when she shared a series of photos to Instagram as she proudly showed off her growing bump.

Halsey wore a multi-colored crocheted crop top that revealed her bare middle for the first shot, but removed it for the final two snaps. She posed in front of silk sheets that were hung up behind her and captioned the upload by writing, “surprise!” alongside a baby bottle, rainbow emoji, and an angel.

Per Vanity Fair, despite the two being pretty private about their relationship, Aydin reposted the announcement on his Instagram Stories alongside a very sweet message for the “Without Me” singer. “Heart so full, I love you, sweetness,” he wrote. Halsey responded by writing, “I love you!!!!! And I love this mini human already!”

The star kept fans updated with her pregnancy journey in the months that followed with sweet bump photos on Instagram, and she’s dishing even more on her pregnancy journey by getting candid about her cravings. It turns out they have to do with one of the biggest K-pop bands in the game, too. Scroll on for details. 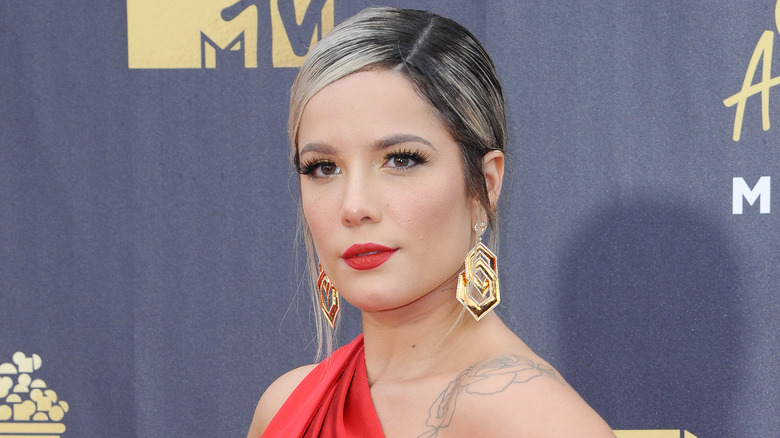 Halsey took to Instagram Stories on June 15 to tell fans all about her pregnancy cravings as she teased she thinks her unborn baby is already a major fan of the K-pop band BTS, making them part of the all powerful BTS Army.

Twitter fans noticed that Halsey shared a photo as she chowed down on a McDonald’s meal inspired by the South Korean band. The snap showed a brown bag from the fast-food company on her lap with the words “The BTS meal” on it. Underneath, Halsey joked her baby is already a big fan, writing, “baby is army.” Halsey already has a close relationship with the group.

But this isn’t the first time she’s revealed what she’s eaten during her pregnancy on Instagram. In March, she shared photos of pizza to her story and, before that, chowed down on a bagel with cream cheese and tomato (via Life & Style). Halsey also hit up Raising Cane’s in another social media update, where she enjoyed a chicken finger meal, Texas toast, and fries.

In January, Halsey said on “The Kelly Clarkson Show” she just “can’t stop eating” during her pregnancy. “I don’t know what’s gotten into me,” she teased, noting that slowing down during the coronavirus pandemic had seen her eat a little less healthy than she’s used to as well. “Since I’ve been home, I’ve had time to experiment with different snacks and I take it pretty seriously,” she joked.