Home » Lifestyle » Why on earth is saving and caring for our environment seen as ‘girly’?

According to a recent study from Penn State University in the US, being proactive about things like recycling, shopping with re-usable bags and switching off the airconditioner (their examples), are regarded as “feminine”. Billy Porter notwithstanding, there remains a stigma attached to men seen as feminine in any way, hence our discomfort at little boys wearing pink or dressing up as Elsa in Frozen.

On the International Women’s Day following Australia’s horrendous bushfires and floods, this idea that caring for the planet is “girly” is enlightening. It helps explain why many conservatives are quick to resist even the most reasonable action on climate change. Remember how scornful the Coalition was about electric cars during last year’s federal election? Remember how they accused the Labor Party of wanting to “end the weekend” by stopping Aussies towing boats and caravans in their four-wheel-drives and V8 utes? 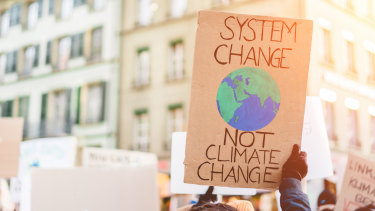 As our planet heats up, we desperately need men to realise that it is not unmanly to care deeply about the natural world.Credit:iStock

Perhaps conservative political parties understand that caring for the planet triggers an anxiety among some voters – often older, male and white – that the world is becoming feminised. This might also help to explain why so many conservatives seem to prioritise a few thousand jobs in coal mining over the much larger number of threatened jobs in tourism and hospitality.

Coal mining (despite employing a few token women) is an archetypal bloke’s job. It’s dirty, dangerous and all about muscle, whether human or mechanical. Serving coffee, making beds and guiding tourists around? Not so much.

I’m not the first to notice this relationship between action on climate change and fear of the rise of the feminine. After all, we refer to “Mother Earth” and “Mother Nature”, indicating that we identify the natural world as female. This makes some sense, given that it nurtures, feeds and sustains every living thing.

I’m not the first to notice the relationship between action on climate change and fear of the rise of the feminine.

For centuries, patriarchal societies have seen nature as being at the service of mankind (and I use that term deliberately). We call the submission of the natural world “progress”. The natural world is there to be bent to our will, not the other way around.

As a result of our exploitation of nature, we are now facing an existential challenge. Mother Earth has turned and is unleashing nature against us. If we want to survive, we must find ways to treat her with more respect. We have to recognise that her bounty has limits and that the macho “winner takes all and does with it what he will” perspective is self-defeating.

The feminist project, and International Women’s Day, is about elevating the feminine in general and demanding that women’s work and women’s lives be respected and taken seriously. It is not about women over men but about respecting the softer, nurturing side of us all. As our planet heats up, we desperately need men to realise that it is not unmanly to care deeply about the natural world.

Perhaps that is why so many of the current crop of macho leaders are determined to deny man-made climate change and refuse to take any mitigating action. They see their resistance as existential, too. If they accept that the planet needs to be cared for, rather than exploited, if they accept that this caring must be done by everyone, then a certain kind of rigid, bombastic masculinity may have had its day. No doubt it is also why it seems to be a very particular demographic that is so mortally offended by Greta Thunberg.

It’s a battle of archetypes: old men versus a very young woman.

Seen in that way, feminism and its insistence that we respect the distaff side of humanity – not just those of us who are actually female, but the feminine attributes within us all – is not only about the status of women, it’s about saving the world.

This article appears in Sunday Life magazine within the Sun-Herald and the Sunday Age on sale March 8.