Why so many women like me are having an ALMOST affair: Novelist JANE GREEN had a loving husband and a happy family, but as she reveals here, it was not enough to make her immune to a new type of infidelity…

Looking back, I can see how easily my head was turned. I was in my mid-40s and happily married, or so I thought, to a wonderful man who loved me. Busy raising our six children in the suburbs just outside New York — but still an English girl at heart.

This was my second marriage, which had been an unexpected love story. I answered an ad for a tiny beach cottage, and shortly thereafter fell madly in love with its owner. The man with twinkly blue eyes and a ready smile.

I had four children, he had two, and our families seemed to fit together. We stole away for moments of romance when the children were asleep, or on the very rare weekends when we found ourselves childless.

We had been together for six years, married for three. Our wedding had been tiny, just our families and children, one set of dear friends. We got married in front of a fireplace in a small boutique hotel in our town, both wiping tears away as we said our vows. I knew this time it would be for ever. 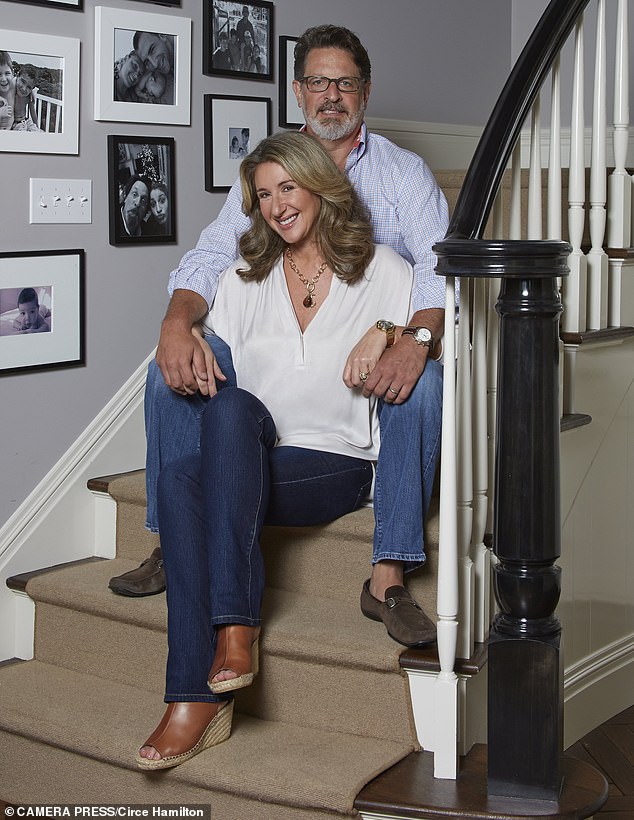 Looking back, I can see how easily my head was turned. I was in my mid-40s and happily married, or so I thought, to a wonderful man who loved me, writes Jane Green (pictured with her husband Ian Warburg)

And then, it was on to real life. My husband would joke that life had become ‘pots and pans’: we were so busy chauffeuring the children around, cooking dinner, juggling work and family life, we didn’t have time to focus on each other.

We were weighted down by concern, children, financial commitments, exhaustion. There seemed to be little room left for desire.

My publisher asked to send me to a book conference in California. I couldn’t wait — anything work related that involved travel was a break from the monotony, a chance to remember who I was when not defined by being someone’s wife, someone’s mother.

I was to speak on a panel of authors, most of whom I didn’t know, held at a large hotel close to Disneyland. I decided to have lunch in the bar beforehand, to settle my nerves and regroup before the event. Out of the corner of my eye, I noticed a young, very handsome man sit next to me.

He got out some papers and placed them on the counter, and I noticed my name written on the paper. He was clearly one of the other authors on my panel, so I turned and introduced myself.

Within minutes, we were engaged in a lively chat, and as we ordered our respective salads, our conversation went from small talk about publishing and the writing life, to real talk about parents, and grief, and relationships.

At a certain point in our conversation, it occurred to me, with a jolt, that he might have been flirting with me; that there might be chemistry between us.

It had been so long since someone had flirted with me, I told myself I must have been imagining things. Besides, he was so young! So handsome! What on earth was I thinking?

He was the first one up at the podium to speak. ‘I was just talking to this very lovely women in the bar,’ he said, ‘and when I said I didn’t know what to talk about today, she advised me to tell funny stories and talk about celebrities I know.’ I sank my head into my hands, my cheeks burning with embarrassment. It was true, I had said that, only half-joking, but all I could think was: very lovely woman. He said I was a very lovely woman. 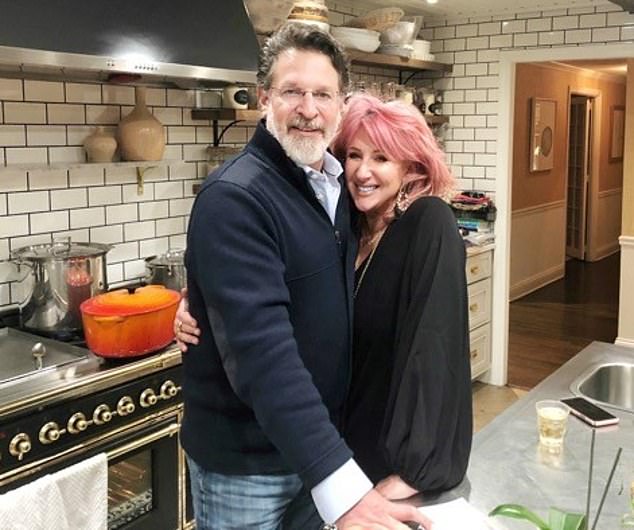 At a certain point in our conversation, it occurred to me, with a jolt, that he might have been flirting with me; that there might be chemistry between us, she writes (Pictured: Jane and Ian)

After the event, we exchanged email addresses, promising to read each other’s novels and stay in touch. I didn’t think much about it, other than to enjoy the little bit of attention I had had. A few days later, on a plane to the UK for a book tour, I settled in to read his novel.

Landing at Heathrow, I texted my husband to say I had arrived safely, then emailed the young, handsome author. I told him the truth, that I had finished his book and found it beautifully written.

His response came back immediately. If I didn’t send him my latest book, he said, he would show up outside my window like John Cusack in Say Anything.

I hadn’t ever seen that film, but I watched it in the hotel room that evening, trying to decipher the scene, the lyrics of the soundtrack song, trying to figure out if there was deeper meaning to his email.

We emailed back and forth during that trip to England, and every time I saw his name in his inbox, I felt my heart soar. I felt alive again in a way I hadn’t in years; I felt pretty, and sexy, and young, as I made my way around the UK, constantly checking my phone for his name in my inbox.

Who amongst us, married to wonderful people, would ever have an affair? Most of us are loyal, honest, trustworthy, we are not the sort of people who would hurt our spouses in that way.

We don’t want to necessarily do anything, we just want a little excitement, a little more dopamine released in our brains; we want to feel that we are still exciting. But if you don’t walk away in time, there is enormous danger ahead.

I know there is a certain type of man who constantly needs approval, who kids himself that he is able to compartmentalise his life, thereby not hurting his wife. But the thrill, the lure of excitement, of feeling alive again, is the same for women as it is for men.

The late psychologist, Dr Shirley Glass, one of the world’s experts on infidelity, had this to say: ‘The new infidelity is between people who unwittingly form deep, passionate connections before realising that they’ve crossed the line from platonic friendship into romantic love. Infidelity is any emotional or sexual intimacy that violates trust.’

Flirtatious emails can very quickly become what feels like a deep, passionate connection — that’s what I was falling into. The young, handsome author and I continued emailing, and shortly after my return, he visited New York, and we met for a quick drink.

I kissed him goodbye on the cheek, and when I arrived home, flushed with too much flirting and too many martinis, my husband took one look at me: ‘Uh oh,’ he stepped back and stared at me. ‘My wife has a crush.’

Over the course of the next year, the emails between the author and I gradually grew less and less. I still felt a flicker of excitement when I saw his name in my inbox, but he was in California, I was on the East Coast and it was unlikely I would ever see him again. Then I was invited to speak at an event in Los Angeles. Los Angeles! That was where the handsome author lived.

I accepted, and emailed him to let him know. Within minutes, we had agreed to brunch. I went to find my husband, to inform him I would be away on September 4th. ‘September 4th?’ said he. ‘I don’t think so.’ ‘What? I have to go. It’s my career!’ I was indignant.

‘You mean, you’re going away on my birthday?’ he replied. I was mortified. Not only had I forgotten my husband’s birthday but I was planning on spending it brunching with another man.

My husband’s eyes lit up. ‘I know!’ he said. ‘Why don’t I come with you? We can make a weekend of it!’ I stared at him, like a deer caught in the headlights. But what could I say? So off we went together, not just to LA but to meet Mr Dreamy.

At the restaurant, I stopped speaking. I didn’t have much of a choice, unable to get a word in edgeways as my husband and the young, handsome author chatted away, nineteen to the dozen.

At one point, the author excused himself and left the table. ‘Wow,’ my husband turned to me, his eyes all knowing. ‘He’s the best looking man I’ve ever seen.’

After lunch, the author invited us to join him on a walk around the canals in the Venice neighbourhood. I was not dressed for walking, I was dressed for brunching, in much-too-tight jeans and strappy sandals that I thought had just the right amount of approachability combined with sex appeal. My husband enthusiastically agreed, eager to continue this new bromance.

And so, we walked. It was a blistering hot day, and within minutes my hair, which had been expertly blow-dried, frizzed into something resembling a large cloud of candy floss, sweat was trickling along my hairline, and painful blisters were forming underneath those sexy, strappy sandals.

I limped along by myself, behind my husband and the author, ten yards in front of me, their heads together, still chatting like the oldest of friends. It bloody well serves me right, I thought.

Later that night, I looked at my husband, at his salty sea-dog white beard, his large hands that make me feel safe, and I thought about how much peace, and love, and serenity he has brought to my life.

A friend once told me that the grass is greener where you water it. I had forgotten to water the grass. We had become so used to taking each other for granted, we had lost the spark.

When we got home I shamefacedly confessed to my husband that I had had what I called an ‘almost affair’. I had betrayed him emotionally, if not physically. That I had been seduced by the attention.

He was stunned at first, hurt I am sure, but he held me close and told me he loved me and he trusted me. And I felt ashamed.

I had never felt so grateful to have avoided the path of excitement, and danger. Later that night the young, handsome author emailed me.

This time, there was no fluttering of my heart when I saw his name in my inbox. He wrote to tell me he thought my husband was wonderful, handsome, and utterly brilliant. Yes, I thought, leaning over to kiss my husband. You are absolutely right.

U.S. Citizens 'Should Not Travel By Cruise Ship' Due to Coronavirus Risk, Says State Department