Kevin Federline and Britney Spears were married for three years, from 2004 to 2007. They share two sons, Sean and Jayden, and Federline has been the main custodial parent for the boys since 2008. And according to Page Six, Federline may request something before Britney’s conservatorship ends that will be controversial.

On June 23, Britney spoke to the court about her conservatorship, which began in 2008. The conservatorship allows her dad Jamie Spears to control every aspect of her life, from the color of her kitchen cabinets to her friends and even her birth control choices, Britney claimed. According to her testimony, Britney’s father rules the conservatorship with an iron fist over the pop star’s $60 million fortune, and Jamie has reaped the benefits of his daughter’s work since he took over in 2008.

Britney’s heartbreaking court statement on June 23 angered fans who have been calling to #FreeBritney for years. In the statement, the pop star said (per Variety), “I’m not happy. I can’t sleep. I’m so angry it’s insane. And I’m depressed. I cry every day.”

Despite Britney’s gut-wrenching statement in court, her ex-husband’s potential request before ending Britney’s conservatorship may raise eyebrows. Keep reading to find out why.

Kevin Federline may ask for an evaluation of Britney Spears 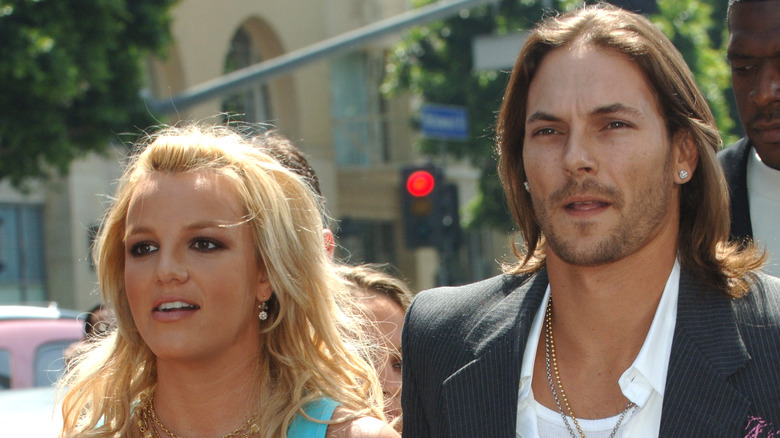 Britney Spears’s ex-husband Kevin Federline may request that she submits to a medical evaluation before her conservatorship is terminated, divorce attorney Mark Vincent Kaplan told Page Six. “I’ve seen it reported that Britney wants [the conservatorship] terminated without any expert evaluation… she had revealed in the statement she made that she had been put on lithium, and I think, as you can imagine, lithium is regarded as a very powerful psychotropic medication,” Kaplan told the outlet. “I’m sure that Kevin would at least want to know what the conditions were that gave rise to her being prescribed that.” Did he miss the part where Britney claimed, per Insider, she was forced to take lithium against her will?

In her court statement, Britney said (per Variety), “I don’t want to be evaluated, and be sat in a room with people four hours a day, like they did to me before. And they made it even worse for me after that happened,”

While Federline’s attorney told People that his client “certainly respects Britney and only hopes the best for her,” custody of their children is still an issue. (Federline has 70% custody, per TMZ, while Britney, who has been fighting to get 50-50 custody, has 30% custodial custody). “The best thing would be for [Britney] to be healthy and happy,” Kaplan explained. “And if either of those things aren’t true, it doesn’t provide for the best setting for custody to be exercised.”

‘Gone With The Wind’ Was Removed From HBO Max, But It’s Not Gone Forever

Your September 2020 Monthly Sex Horoscope Is More Intimate Than Usual