Home » Lifestyle » Will the bushfires affect the flavour of this year’s locally produced wines?

The 2020 wine harvest will go down as the worst ever in terms of damage caused by bushfires. More people died in the 2009 Victorian fires, which smashed the Yarra Valley, but in terms of crop loss, 2020 is much worse. A lot of the harm was caused by smoke, which affected most vineyard regions along Australia’s eastern seaboard. 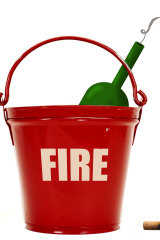 The Hunter Valley, Mudgee, Hilltops, Orange, Southern Highlands, Tumbarumba, Canberra district, Gippsland, Beechworth and North East Victoria have been badly affected and some producers have announced they won’t be making any premium wines this year. These include the likes of Tyrrell’s and Clonakilla: the higher the esteem of the winery, the more they have to lose and the less likely they are to risk compromising their reputation.

Until this year, the belief was that wine was unlikely to show smoke-taint if the smoke pre-dated veraison, which is when the grapes change colour and start to swell. This year’s experience has exploded that theory. All over eastern Australia, wineries are sending grapes to the laboratories to have them tested. “Bucket ferments” are being made of each batch, as taint can only be accurately measured after grapes have been fermented.

It’s likely most drinkers wouldn’t notice a subtle smokiness, especially in red wine. But the more intense the smokiness, the more unpleasant. At worst, the wine tastes as if an ashtray has been tipped into it.

Sometimes, smoke taint grows after bottling. This makes the decision whether or not to harvest even trickier. In past bushfire years, some wineries chose to make wine and sell it cheaply as Fire Truck Red, or some such. Others sold grapes to the factory wineries who could “lose” it in big blends. Drinking it won’t harm you. Wine lovers can rest assured that most reputable wineries won’t be offering smoke-tainted wine for sale. No doubt there will be some.

But don’t write off the 2020 wines. There will be plenty of excellent wines, even from vineyards that were in the fire zones. And they need our support now, more than ever.

Got a drinks question for Huon Hooke? [email protected]

To read more from Good Weekend magazine, visit our page at The Sydney Morning Herald, The Age and Brisbane Times.

Sky TV, Amazon Prime Video, Disney+, Apple TV+ and more: How to stream all these FREE