You can hear the nostalgia in Curtis “50 Cent” Jackson’s voice when he talks about hip-hop music in the ’90s and how it shapes his latest Starz crime drama Power Book III: Raising Kanan.

The prequel series, which acts as an origin story for the teenage version of his popular Power character Kanan Stark (now played by Mekai Curtis), takes place in South Jamaica, Queens and establishes the New York borough as a character with beloved rap hits from that era setting the scene. And in this Sunday’s episode (8/7c), Lou-Lou’s (Snowfall‘s Malcolm M. Mays) foray into the music business and his hip-hop artist showcase take center stage.

“Kanan’s story helps explain the significance of the ’90s in New York,” Jackson, one of the Power franchise’s executive producers, tells TVLine. “This city was culturally a lot different from what’s going on now. Hip-hop was still a baby. You could listen to it for an hour when DJ Red Alert played it. Back then, you had to tape it and go back and listen.”

Even the show’s title song taps into the music genre’s styles and influences from three decades ago, he says.

“There was a strong presence of R&B in hip-hop, and that’s why I had to use Keni Burke’s ‘Risin’ To the Top’ in the theme song because that’s what people appreciated during that time,” Jackson observes. “This is music for us, by us. It’s the real deal. This is how kids in the ‘hood experienced the ’90s. Kids who now like trap music are wondering why we get so excited to hear Soul II Soul’s ‘Back To Life (However Do You Want Me).’ But it’s not about finding a new artist. It’s about finding the core artist.” 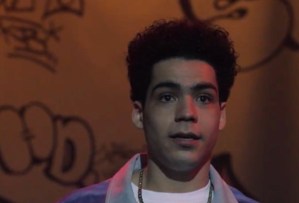 Episode 6, titled “Level Up,” also digs into studio gangsters who write rhymes and don’t commit crimes but focus on the subject as if they do. Such is the case with Kanan’s friend Famous (Antonio Ortiz), who raps about how the “Streets Need a Body,” while Jukebox (Hailey Kilgore) sings the hook. While Famous isn’t snitching on Kanan, he is preempting his story.

“Back then, it was see no evil, hear no evil,” Jackson recalls. “People weren’t telling on you. Nowadays, these n—-s will snitch on you before anyone even asks.”

Another recurring theme throughout Power Book III, Jackson says, is how bad things happen with good intentions. For instance, Kanan inadvertently revealed to Davina (Lovie Simone) where his family’s stash house was because he ran outside to say hello. This time around, Lou-Lou throws an artist showcase, and it becomes a potential battleground for the ongoing war between Raq (Madam Secretary‘s Patina Miller) and Nique (Joey Bada$$).

“That’s how the game works,” Jackson concludes. “Even the most innocent action can be turned into something sinister.”

Check out an exclusive clip below of Lou-Lou and Nique’s “agreement” from this Sunday’s episode, and find out why verbal pacts with gangsters carry more risk than reward: