Home » TV and Movies » All Quiet on the Western Front Review: War Is Still Hell in German Remake

“All Quiet on the Western Front” is one of those foundational texts that transcends clichés, because it invented them. Erich Maria Remarque’s 1928 novel and Lewis Milestone’s Oscar-winning 1930 film are cornerstones of the “war is hell” subgenre — which, in a post-”Apocalypse Now,” post-”Saving Private Ryan” era, has become more ubiquitous than the jingoistic war epics it was designed to counter.

There might be some fresh insight to be gained from a new adaptation of “All Quiet,” despite the ripple effects of its influence: War, sadly, has not ended because of films about how awful it is. And its futility and absurdity remain constant, even as its face evolves with the times. Sadly, Edward Berger’s handsome, but expected version of the story doesn’t add much to the canon except for some starkly beautiful imagery.

Berger’s “All Quiet” was produced in association with Netflix, and is the first German-language film version of Remarque’s novel, which was originally published in German. “All Quiet” was one of the works targeted by Nazi book-burnings, and this new film is an attempt to reclaim the novel as an essential work of German culture. It’s coming from inside the house, so to speak, and there is a certain Teutonic seriousness to the filmmaking as well as the subject matter. Just as polished but not quite as flashy as Sam Mendes’ “1917,” the film displays a similar level of commitment to historical detail, but presents its elaborately staged battlefield scenes in a relatively more plain spoken style.

Instead, Berger and cinematographer James Friend focus on color, such as it is. The palette here ranges from dried clay to blackened smoke, with little but rusty red blood and urgent orange fire to break up the muddy monochrome look of the Western front. Everything is wet — if it’s not raining, the recruits are crawling on their bellies through mud puddles, their uniforms soaked through with filthy cappuccino-colored water — and cold. The skies are overcast, the ground is barren and crunchy with frost, and the wind whispers through hushed groves of oak trees like the voices of the dead. 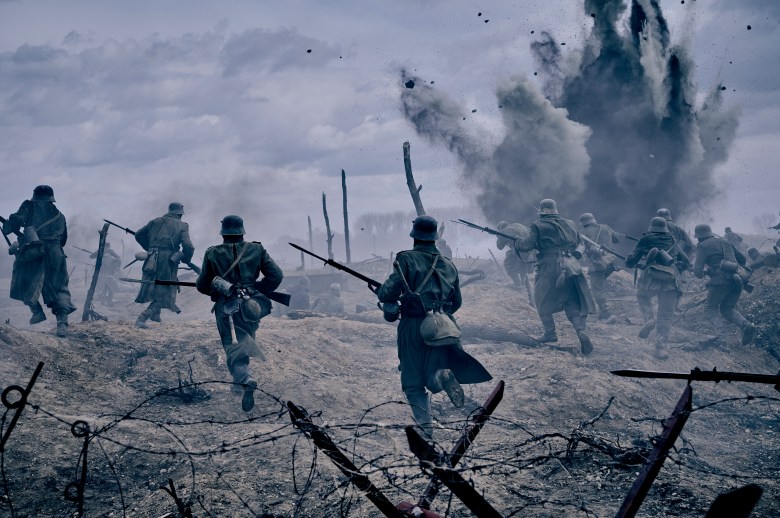 “All Quiet on the Western Front”

And there are many voices to be heard. “All Quiet on the Western Front” is a story of how naive boys become broken men, and the film opens with a young soldier being mowed down on the battlefield and thrown into a mass grave. His boots are pulled off of his stiff feet, and sent back to a factory where they’re cleaned up and given to another acne-scarred recruit who will join the boots’ previous owner in death soon enough. Throughout the film, German officers report back to their superiors with big, abstract numbers: 20,000 dead in an afternoon. 100,000 dead by the end of the week.

These abstractions are contrasted with the individualized trauma inflicted on Paul Baumer (Felix Kammerer), a 17-year-old infantryman who joins up on a whim with a group of classmates who brag that they’ll be marching on Paris in six weeks. Instead, Paul and his friends — Paul’s best buddy Albert (Aaron Hilmer), their bespectacled school chum Ludwig (Adrian Grunewald), and the worldly Katczinsky (Albrecht Schuch) — watch helplessly as their fellow soldiers are picked off in horrifyingly graphic ways over the course of 18 months.

Paul’s disillusionment is seen primarily in Kammerer’s eyes, which go from wide with fear to cold and dead as he begins to wonder if it might be better to join his comrades in death. Compared to Milestone’s “All Quiet,” Berger’s version spends less of its screen time hanging out with the infantrymen as they kill time between raids, chasing girls and geese across the French countryside like the teenagers that they are. This makes for both a bleaker and a less impactful film: The onslaught of death is more relentless (and numbing) here, yes. But we don’t know these young men as well when they do meet their deaths, which makes the loss hurt just a little less.

In its place, Berger inserts scenes set at German high command, where the clean linens, fine crystal, and plentiful food contrast as sharply with the soldiers’ experience on the front as the opinions of liberal politician Erzberger (Daniel Brühl) contrast with those of hawkish career soldier Gen. Friedrich (Devid Striesow). Erzberger’s goal is simply to end the war, and he rushes to accept a ceasefire despite its accompanying blow to German dignity; Friedrich, on the other hand, insists on keeping the bloodshed going until the very end as a matter of pride, which is easy for him to say from behind thick stone walls.

The showiest and most modern aspect of the filmmaking in “All Quiet” is its score, from Academy Award nominee Volker Bertelmann. Bertelmann’s music combines blasts of machine-gun snare drums with a blaring three-note sequence that recalls a famous snippet from Akiria Ifikube’s “Godzilla” theme, and creates a similarly ominous effect of something big, scary, and invincible coming to get the viewer. In this case, that thing is the literal manifestation of humanity’s more violent instincts rather than a metaphorical one.

That’s not to say that “All Quiet on the Western Front” doesn’t traffic in symbolism: Throughout the film, objects like uniforms, dog tags, and the aforementioned pair of boots stand in for the tragic and mind-boggling loss of life on the Western front during WWI. Late in the film, Paul rages at the idea that he can just set aside “two years of hand grenades like a pair of socks” once he returns home from the front. And indeed, for veterans of the First Great War, the physical and psychological damage was lifelong. And the echoes of their ordeal still resonate — and may well forever, as long as dutiful re-creations of their experience like this one keep coming out every few decades.

“All Quiet on the Western Front” premiered at the 2022 Toronto International Film Festival. It will start streaming on Netflix on Friday, October 28.