Home » TV and Movies » ‘Altered Carbon’: How Inclusivity Is Hardwired Into the Future of the Netflix Sci-Fi Drama

According to “Altered Carbon” showrunner Alison Schapker, the “secret weapon” of Netflix’s cyberpunk sci-fi drama is the most compelling rule of its technocratic world: That souls can transfer bodies. That simple premise allows the series to bring fresh talent to its lead character each season as well as bring other characters back from the dead in myriad ways, not to mention imagining a world where women of color are powerful and in charge. Inclusivity is baked into the DNA of the show and that may be its strongest selling point.

Based on Richard K. Morgan’s 2002 novel, “Altered Carbon” imagines a future where a person’s brain can be digitized into a portable “stack,” and then swapped into a new body (or “sleeve”) to achieve immortality. In only two seasons, the show’s militant lead character Takeshi Kovacs has been played by three different actors. Kovacs is the last envoy, a centuries-old interstellar warrior who possesses intuitive powers. The original Kovacs is played by Will Yun Lee, whose stack was transferred into hulking all-American Joel Kinnaman for Season 1. In the second season, Anthony Mackie took up the mantel of the self-serious hero, enlivening a show that can sometimes feel derivative despite having boundless possibilities.

[Editor’s Note: The following portion of this article contains spoilers for “Altered Carbon” Season 2, including the ending.]

At the beginning of Season 2, Kovacs is haunted by visions of his long-lost love Quellcrist Falconer (unstoppable force Renée Elise Goldsberry), leader of the people’s revolution. However, he doesn’t know if she’s alive or simply a figment of his mind. By season’s end, they have rekindled their love and reversed roles, with Kovacs appearing as a voice inside Quell’s head. That means even if “Altered Carbon” recasts Kovacs for a potential Season 3, which it most likely will, there’s a possibility that Mackie could return in some capacity.

“I would always consider it, but the thing about ‘Altered Carbon’ is nothing is ever shut down, so any of the Kovacs could potentially come back,” Schapker said of a potential Mackie return. “Even Quell leaves with him as a ghost in her mind, I love that flip. I think it’s painful to say goodbye to the Kovacs, anyone you’ve spent the season with, so the short answer is yes. At the same time, part of the challenge of the show is, ‘Who’s next?’ I’m totally open to working with Anthony again, and if there’s a reason for him to come back, I think he would be into it, too.” 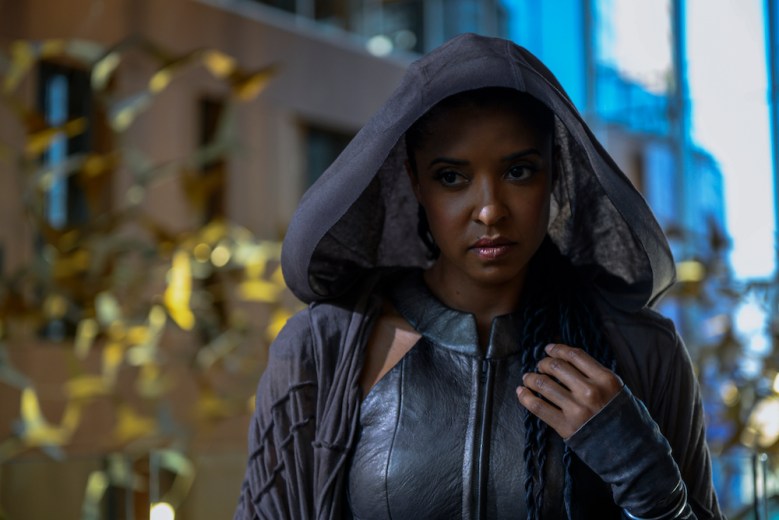 Mackie said he would gladly return to the show, but his reasoning is decidedly less motivated by narrative.

“I would love to, I shot this show for five and a half months and I did not have one bad day of work,” Mackie told IndieWire by phone. He does have some other concerns, however. “If we could shoot it in Montreal or Toronto, I would love to be Takeshi for as long as I could. They’re just amazing cities.” (Season 2 of “Altered Carbon” shot in Vancouver.)

While the rotating cast allows for so much creative freedom, it also presents a challenge in keeping the audience connected to the throughline of the character. As a television fan herself, Schapker is always conscious of this tension. “It is important to me as a fan and as a writer that the Kovacs who is living through the seasons is being carried forward in some way shape or form,” she said. “I care a lot about pleasure in watching television, so it’s always that tightrope that as you’re challenging people to make new identifications you’re also rewarding people for coming back to the show.”

That’s part of why she left the ending of Season 2 how she did, with Poe (Chris Conner) making a data copy of a mysterious stack — the identity of which won’t be unveiled until a potential Season 3. (Netflix has yet to renew the series.)

“I really left the chess pieces where I wanted them. I love that Quell’s out there, I love that Kovacs prime is out there, and I love that Poe made this copy,” said Schapker, stopping herself before revealing the copy’s identity. “I guess I have people I wanna bring back, and I have ideas.”

Mackie has his own ideas about who the copy might be.

As for the possibility of a woman Kovacs? “Hundred percent open to that,” Schapker said. “I think it’s all on the table.”

Dame Judi Dench taken off air as The One Show hit by technical blunder: ‘Shut her laptop!’