The Arclight notice, dated March 29, states that parent company Pacific Theaters Exhibition has not paid March 2021 rent of $181,900.40. (That projects to just under $2.2 million for a full year.) The notice states that it is due in full, payable to collections agent Caitlin Brannon. Reached at her office, Brannon confirmed the notice but would not further confirm its status beyond, “It’s in legal now.”

When legal restrictions were in place, many theaters could argue against rent. In Los Angeles, that defense dissolved when the city authorized operations in mid-March. Arclight and Pacific are both operated by the privately owned Decurion Corp.; sources say the company told distributors that their theaters will reopen only when available films and less stringent audience limits allow for profitability.

These are small chains, totaling 19 theaters, but their total gross in 2019 was $114 million. The Culver City theater, which opened in 2015 after major renovations, has 12 screens and grossed $4.9 million in 2019. A theater with that performance might expect food and concession sales, along with rentals, to bring the annual total to around $8 million. In addition to $2.2 million in rent, expenses would include at least $2.5 million in film rentals along with salaries and operating expenses.

Neither Pacific nor the landlord would comment, but the context is self evident: A large, state-of-the-art complex is a major investment for both parties and its design doesn’t lend itself to other uses. Further negotiations are very likely before the landlord would kick anyone out. Exhibitors hold an edge, especially when the deal is expensive; even if another operator moved in, it likely would negotiate for a reduced deal.

By contrast, Regal Boca Raton looks like a win for the landlord. The 16-screen building, built in 1988, was inherited from Cobb Theaters in a merger. A judge ordered Regal to pay nearly $900,000 — $79,129 by April 12, with another $807,118 by April 23. In what could be a scary precedent for theaters, this judgement is retroactive to last April. Many theaters have been open since late summer in Florida, which was far less restrictive in its closures.

Last year, landlord Terranova gave Regal a minimal break on rent — 20 percent off for the four months of state-mandated closing, with an extended payment plan. In the lawsuit, the landlord insisted that once theaters could open, Regal owed full rent — the same position held by the  Arclight’s Culver City landlord.

In the Houston suburb of River Oaks, Landmark ceased operation days before its lease ended March 31. Though only three screens, it was the city’s prime specialized first-run theater with no real alternatives. That leaves the country’s fourth-largest city without a dedicated art house.

Texas reopened early among the states and the theater began operation in September, but Landmark paid no rent for a year. Landlord Weingarten Realty said it offered a compromise for owed rent and a renegotiated lease going forward. In a statement, Landmark said the issue of paying past rent was a barrier to the deal. 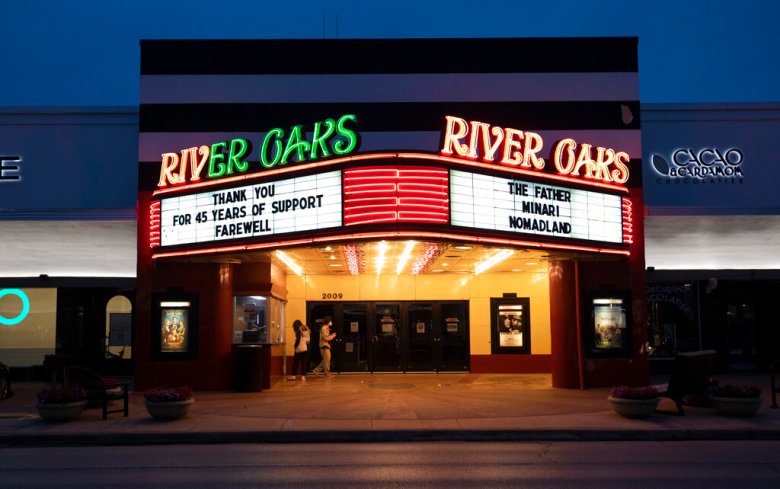 Local cinephiles continue the drive to reopen the theater. Richard Linklater has been a supporter; he said his film education came as a River Oaks patron and suggested that all parties, including the city, needed to focus on its cultural importance. Sources suggest other specialized operators may have interest. Located in a prime shopping center in an upscale part of Houston, the complex’s future remains in question.

Landmark is otherwise working to reopen most of its theaters. It has lost six locations since the start of 2020. The New York 57 West and the single-screen Ken in San Diego were headed for closure before the pandemic started. Landmark’s management of the Harbor East, the primary specialized theater for Baltimore, ended last month; that location will be revamped under new management. Landmark is also leaving the Minneapolis Edina 4 theater. The landlord of the Tivoli in St. Louis, closed since last March, just announced a new tenant for the location with the expectation of reopening.

“We have opened 18 of 44 Landmark locations, prioritized getting open in most markets with at least one location, and are working toward getting most or all of the remainder opened within the near future,” Landmark President and COO Paul Serwitz told IndieWire.

Their theaters, a crucial player of specialized films, see limited benefit from “Godzilla vs. Kong” and other upcoming wide-release hits. Meanwhile, Oscar contenders face both home viewing competition and an older audience far more reluctant yet to venture into theaters.

Sign Up: Stay on top of the latest breaking film and TV news! Sign up for our Email Newsletters here.