ITV soap Coronation Street aired devastating scenes over Christmas when Shona Ramsey (played by Julia Goulding) was left in a coma after being caught in the crossfire of Derek Milligan’s (Craig Els) siege. Shona suffered brain damage as a result and does not remember her husband David Platt (Jack P Shepherd). With her return imminent, David has been left tormented by the ordeal and one person who has spotted this is Craig Tinker (Colson Smith) but will his later discoveries lead to David’s arrest in a new twist?

Last year was a turbulent one for Shona and David after the latter was sent to prison for his part in stealing grandmother Audrey Robert’s (Sue Nicholls) money.

She was desperate to reunite with David and the pair were due to marry as soon as he was released from prison.

However, David became embroiled in conflict whilst inside when he was faced with his rapist Josh Tucker (Ryan Clayton). 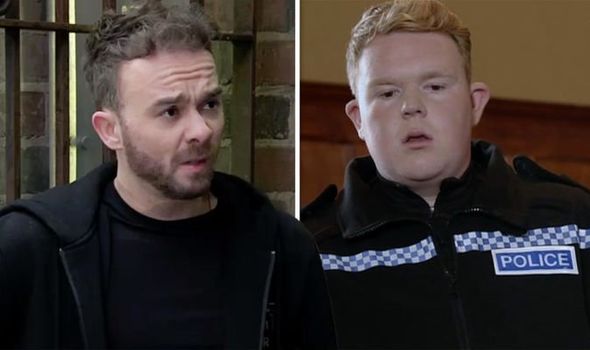 David was present at a later attack on Josh and it looked as though his time in prison could be extended.

Luckily, David managed to make a case for his early release and married Shona the same day he arrived back on the cobbles.

The pair were thrilled to get hitched at long last – despite David not having time to put on a suit and tie – and they still had their perfect day.

As they settled into marital bliss, their world was to be turned upside-down within months when Shona was left in a critical condition after being shot. 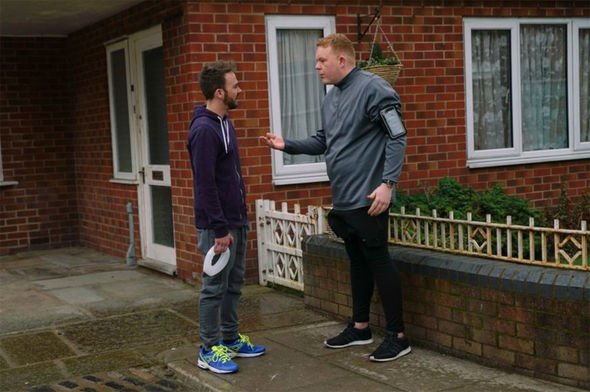 It was revealed she had suffered long-lasting brain damage and when she woke up, could not remember who David was.

David tried everything possible to jog his wife’s memory but was left devastated when he realised it wasn’t working.

Now, with Shona soon set to return, David has been getting himself in new trouble but could he end up arrested as he goes out of control?

Earlier this week, David set to get a thrill for himself and deliberately caused conflict on a rough estate, by jumping on someone’s car.

The passengers chased after him and David got a rush from the experience of running away, before being spotted by policeman Craig.

Tonight, Craig invited the barber to go running with him after he spotted David needed a better form of stress relief.

Craig spoke out about the high of running, which he admitted he hadn’t yet experienced, leading David to hit back: “No because it doesn’t exist, Craig, that’s something they keep telling you to make you keep running. Should we just sack it off and go to the pub?”

Craig replied: “No, this is a much better form of stress relief. With Shona and everything you must be up to your eyeballs in it.”

Create your own survey at doopoll.co

David agreed: “Yeah, trust me – you don’t want to know,” but will he stay away from danger or will he continue on his downward spiral?

With Shona back on the cobbles shortly, it’s possible he may find everything too much to deal with and cause more trouble.

Although Craig looks to be a good ally for David, if the barber continues to find himself involved in dodgy activities, could Craig feel compelled to report what he’s seen?

Will David manage to get himself back on track in time or will he end up arrested if he goes a step too far?

From Elton John to Phillip Schofield: Coming out stories that changed society

Danny Dyer asks 'have you put whisky in baby Santiago's milk?' as Dani reveals he struggles to sleep