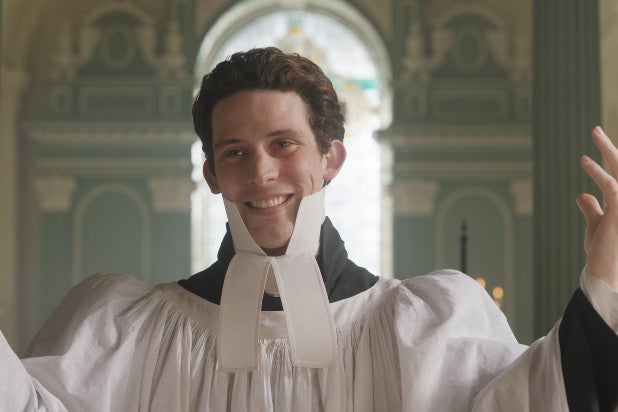 The Jane Austen adaptation “Emma.” was released before the outbreak of coronavirus in the U.S., but costume designer Alexandra Byrne’s is a near-certain lock for an Oscar nomination when the list is revealed March 15.

The prolific British designer, whose credits range from “Elizabeth” to “Guardians of the Galaxy,” was praised for the women’s wardrobe in “Emma.,” for the vivid pastels of the fabrics and the clothes that, as Byrne told TheWrap, “have the power of sugared macarons.”

But men’s fashion in “Emma.” was also a large part of Byrne’s job. The wardrobe and the dressing of male characters in the film is a serious undercurrent, though the absurdly high and starched collar of Vicar Elton (played by Josh O’Connor of “The Crown”) is also used for comic effect. The collar, Byrne explained to TheWrap, is historically accurate.

“I read a diary of a gentlemen, who explained dressing with his valet,” Byrne said. “The measure of a man in the Recency Era was about the quality of his laundry, how clean his shirt was, and how starched white the collar was. And it describes the valet tying both the collar and the cravat (ascot), and the man would tilt his chin up to the ceiling while the cravat was tied. Then he would lower his chin and he would literally crack the starch with his chin.”

Especially with the somewhat conceited, buffoonish Vicar character in “Emma.,” Byrne and her director Autumn de Wilde decided to really boost the starch.

“We pushed that to the limit,” Byrne said. “But I thought, ‘Well, why not?’ That is in all the fashion plates, perhaps it’s a bit exaggerated, but this is the fun part of designing period costumes. We played with this and we used quite a lot of different color shades depending on the actor’s jawlines and the height of their ears and height of their status.”

She added, “And the height of their vanity, of course.”

And a subtle sense of vanity has another place in “Emma.” where a pivotal, even political role is played by men’s costumes. Or a lack thereof. When audiences first see the film’s romantic hero George Knightley (Johnny Flynn), he is in the process of being dressed by his valets. The scene, which features nudity and has often occurred in art and films with a woman at the center, was a deliberate statement by the filmmaker, Byrne recalled. 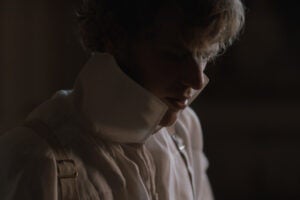 “Autumn mentioned that we always see female characters dressing, with corsets and stockings. She wanted to push this idea with Mr. Knightley. Autumn ultimately wants the audience to understand how the clothes work and how the clothing helped compose a day for each of the characters.”

The scene is revealing, not just for Flynn’s derriere.

“Men and women’s clothing was quite similar, in terms of what they wore underneath,” Byrne said. “I talked Autumn through the whole thing of men not wearing any underwear and how the shirt tails were wrapped through their crotch, in place of underwear. And the men wore full stockings on their legs.”

Recency men didn’t have it as easy as some of their descendants.

“Dressing a man was a very elaborate process,” Byrne said with a laugh. “And so I was very pleased to see it on display in the film.”

‘Grey’s Anatomy’: What Will Amelia and Link Name Their Baby? Fans Might Be a Little Disappointed