Mandy’s impromptu appearance at the HOP left Nicola seething, as she struggled to focus on daughter Angelica’s birthday party with her sworn enemy nearby.

Unable to resist, the cafe owner badmouthed Mandy, knowing full well that she was within ear-shot.

Mandy remained calm, although she was clearly not a fan of what Nicola had to say about her, and thus approached her, revealing that she’ll get out of her road to avoid any more conflict.

Nicola played it cool, pretending to not care one way or another, as Mandy headed off. But when Nicola resorted to badmouthing Vinny (Bradley Johnson), Mandy took shocking action, whacking her foe over the head!

Speechless, Nicola turned around to find a smug Mandy standing right behind her, ready for round two!

And before long, the foes began to do battle, attacking each other with whatever items they could get their hands on! 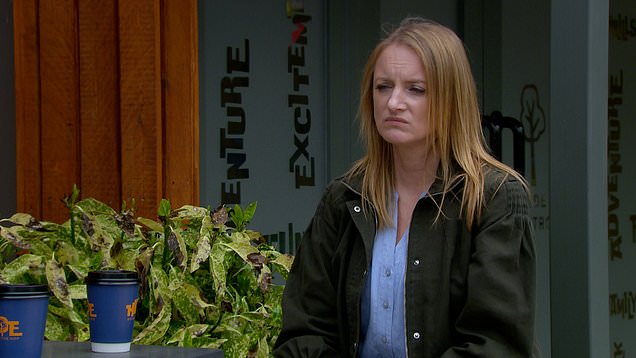 Nicola soon resorted to water balloons, branding her nemesis a ‘dirty mare’, before telling her to ‘have a wash’.

Mandy retaliated by forcing Nicola face-first into one of Angel’s birthday cake, and Nicola returned the favour by shoving Mandy’s face into the other!

The battle of epic proportions continued, with both women doing their best wrestling moves, tackling one another to the floor, before ending up on the bouncy castle!

Mandy lost her wig amid the drama, a crime for which Nicola paid the price, as her enemy tackled her to the floor, before bouncing on top of her!

Viewers were left crying with laughter at the scenes, with one branding it the ‘best thing’ they’d ever seen on a soap.

‘That was the best thing I’ve ever seen on a soap,’ they said, while another added: ‘Well i needed that laugh!!’

‘Literally I’ve got Nicola on my shoulders, we were spinning!’

Nicola Wheeler added: ‘This is definitely the most fun fight I’ve ever had on Emmerdale! ‘It was just brilliant. I was knackered the next day, we were saying we had to come in, we had more stuff to shoot.’