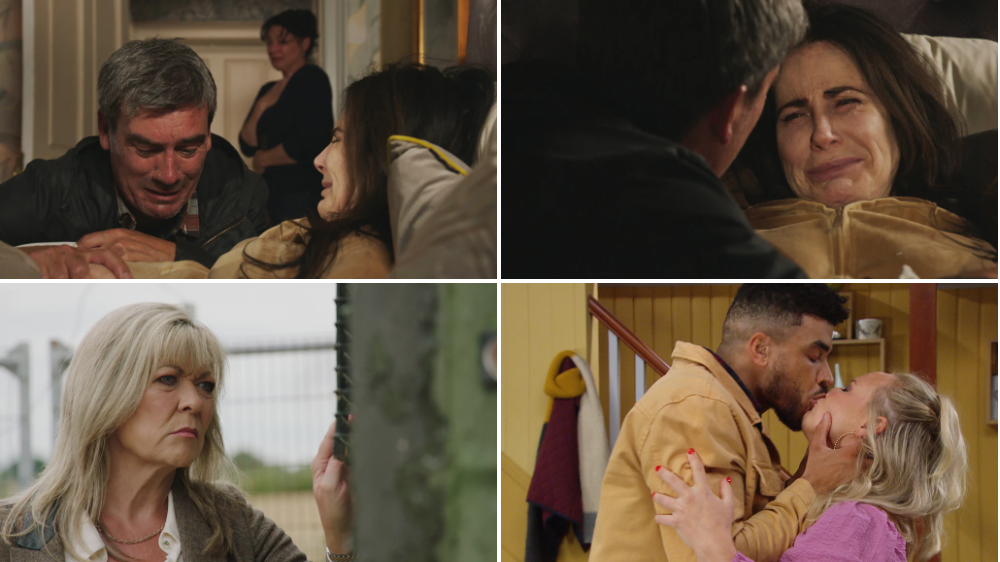 Life for the Dingles – and for the Emmerdale audience – is never going to be the same again, as the beloved Faith Dingle (Sally Dexter) dies in tragic scenes.

As she makes her decision to end her life, a distraught Cain (Jeff Hordley) is by her side – but Chas (Lucy Pargeter) is away from the village; having an illicit encounter with lover Al Chapman (Michael Wildman).

It’s something she will live to regret…

Speaking of regrets, Will Taylor (Dean Andrews) and Harriet Finch (Katherine Dow Blyton) take a risk that could be their death warrant.

Kim Tate (Claire King) overhears Harriet declaring her love to Will on the eve of their wedding.

And you don’t mess with Kim Tate…

Although Tracy is thrown to witness Nate and Naomi together in the village, she assures sister Vanessa she’s going to tell Nate about her engagement to Ollie.

But before she and Nate know it a charged moment leads to a forbidden encounter.

They are both awkward as they get redressed following their illicit encounter. Tracy hears Vanessa approaching and hurries Nate out of the back door in nothing but his boxer shorts.

Although Tracy does her best to feign an air of normality, Vanessa’s immediately suspicious. Vanessa soon spots Nate’s phone and jeans, and her suspicions are confirmed when he arrives to reclaim the items. Vanessa despairs for her sister when she later confesses that she still likes Nate.

Chas is concerned for Al after his altercation with Aaron. But Aaron remains unrepentant. In the pub Al’s insistent he needs an answer from Chas about the future of their relationship.

But later seeing her happy around her family, Al worries he’s already lost her. Al’s both flabbergasted and elated when she tells him she loves him and wants to be with him.

Will is subdued after his stag and soon tries to assure Bob his declaration to Harriet was just a drunken mistake. Before long Will attempts to play it all down to Harriet but matters are made worse, when after sparks fly, Will hurries away, which only serves to further convince Harriet of his feelings for her.

A heartfelt conversation with Aaron gives Faith an idea. Meanwhile, Cain finally opens up to Moira about his struggles to cope with Faith’s shifting demands. Brimming with excitement, Faith shares her plans for a family day with the Dingles.

Charles is devastated that someone made a complaint about him to the bishop. Suspecting that it might be Nicola, he warns Naomi not to take matters into her own hands and confront Nicola.

Charles sees Naomi loitering outside Victoria Cottage and tries to usher her away before she’s caught breaking her bail conditions. When Nicola emerges, Naomi hides but Charles is caught in an acrimonious conversation with Nicola about her complaint to the bishop.

Cain’s exasperated by Faith’s plan that they are all going to the seaside but when Faith’s health takes a turn, it is bad news for their planned trip yet Faith is insistent the seaside trip will go ahead for the others. Cain’s determined to find a solution.

Tracy ponders whether she should go ahead with her engagement as her feelings for Nate linger.

Dan picks up on Harriet’s awkwardness but Harriet covers.

Nicola’s triumphant when the Bishop believes her lies about Charles abusing his power as Vicar.

She’s stony faced when Laurel claims her actions could cost the village their genuinely good Vicar. Will Nicola change her mind or is this war?

The Dingles and village friends have brought the seaside to Emmerdale! Faith’s thrilled and as she takes everything in, she watches her family revel in the fun.

Faith’s delighted how perfect her day is. When Diane arrives, Faith squeals with happiness and Chas and Rodney exchange a glance; a job well done.

When Cain asks her to dance, Faith is blissfully happy. With the day over, Faith holds a family picture against her heart utterly content.

When Zak remarks on how good Vinny is with children and the prospect of having their own, Liv is left thoughtful.

Before long Liv and Vinny discuss the idea of having kids. But Liv’s happy when Vinny agrees to start with a dog for now.

Rhona’s surprised when she learns about a crush. But could she make things awkward?

Moira’s unsettled by Faith’s hints that she might end her life soon. Brenda, Pollard and Diane vow to create as many memories with Faith as they can…

Before long Moira desperately tries to convince Faith to back out of her plan to end her own life.

Faith assures her she isn’t going ahead with it anytime soon, but a guilty look belies a different story and before long Faith is saying her veiled goodbyes.

Nate leads Faith up to bed, unaware of the heartbreaking decision she’s made.

Alone in her bedroom, Faith switches off her phone and takes one last look at the pictures from yesterday’s adventure. Faith prepares to end her days alone.

Cain arrives and on realising what Faith has done, devastated, he tries to keep her comfortable as she drifts closer towards death. When Cain realises Faith has taken her final breath he is heartbroken. Faith’s family and friends are left devastated by the news of her death.

Chas waits for Al in a lay-by. At the hotel, Al does his best to cheer up Chas as she worries about Faith. He tells her he’s officially bought them a house, and is elated she wants to celebrate.

Chas is blissfully unaware of tragic events occurring back at home.

Persuaded by Al to bury her troubles, Chas agrees to ignore her worries.

When Al switches her phone to silent, Paddy’s many calls go unanswered.

Paddy wants Chas to get back in time and tries to call her without success.

Will Chas come to regret her illicit afternoon with Al?

Kim awaits her wedding day, utterly content with the man she is going to marry.

Meanwhile, guilty Harriet bails from attending. When Will finds out Harriet isn’t coming to the wedding, Kim is left puzzled by his change in mood.

Will confronts Harriet, insisting she be at the wedding and arranges to meet her later which only fuels Harriet’s hope.

Sensing something is wrong Kim goes looking for Will and at the scrapyard, Kim listens in as Harriet fights for Will’s love…

Chas returns home, numb from Faith’s death and all that has happened. Meanwhile, Aaron is horrified by a realisation.