Home » TV and Movies » Fun Netflix Docuseries Eat the Rich: The GameStop Saga Will Make You Learn Something

Don’t feel bad, even highly respected executive editors of business coverage are still a bit confused about the GameStop stock situation and the meme-stock industry in general. It’s all good, Netflix’s three-part docuseries “Eat the Rich: The GameStop Saga” is here to educate — and entertain — all of us. The program accomplishes both of those goals, which it delivers in a bingeable 120-minute package.

The basics of what went down online and in real life (and in the Netflix docuseries) go like this: In 2020, video-game retailer GameStop was the most-shorted company on Wall Street, as hedge-fund managers bet the heavily brick-and-mortar store selling physical media would go bankrupt in an increasingly digital world (and that goes double for the video-game industry itself).

What was originally a wise assumption soon got out of hand. When some savvy number-crunching Redditors realized just how much money was stacked against GameStop’s continued existence, they gobbled up shares and sent the price soaring in January 2021. This was made possible — and also nearly ruined by — the emergence of trading app Robinhood. The eventual GameStop meltdown led to the major usage declines at Robinhood, which itself is now valued below $10 per share. (That trades under HOOD; GameStop’s GME is around $25.)

Retail investor RoaringKitty (on streaming video) aka DeepFuckingValue (on Reddit) aka Keith Patrick Gill (in real life) famously “like(d) the stock,” a rallying call repeated throughout the trio of episodes, and we liked the series about perhaps Wall Street’s wildest single-company rollercoaster ride. While Gill did not participate in the docuseries (and it is unclear whether he truly liked GameStop as an investment or just its uniquely short position), he is the main character by default — and by virtue of the fact that his internet videos and postings are forever.

“Eat the Rich: The GameStop Saga” is co-produced by The Wall Street Journal, which is the publication that says it first identified Gill — the unofficial leader of the r/wallstreetbets self-described “apes” and “degenerates.” (It’s the same group of everyday investors who saved AMC Theatres from the brink of bankruptcy.) 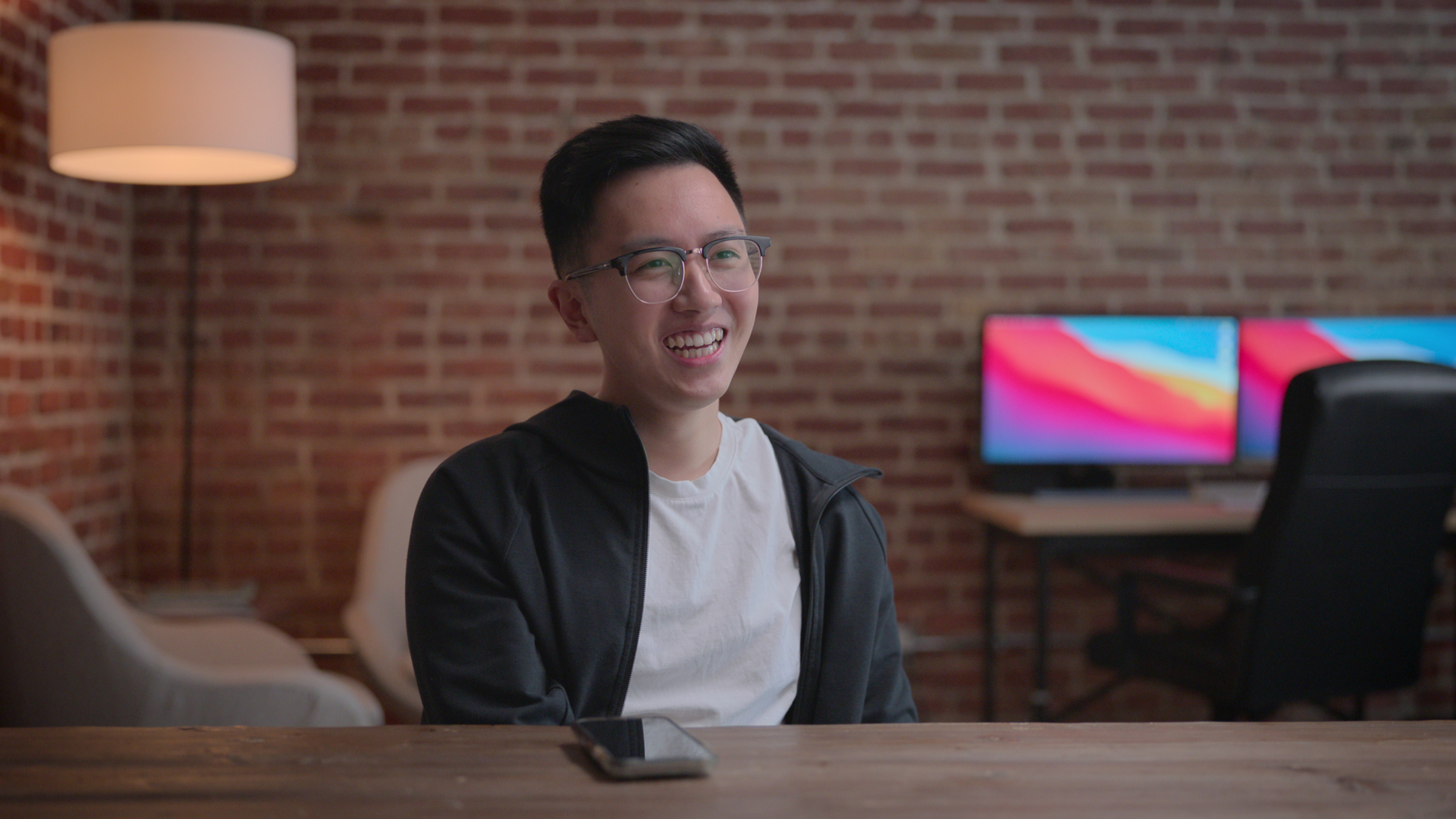 “Eat the Rich: The GameStop Saga”

At the saga’s (and series’) climax, Wall Street fat cats were forced to get out of the very situation they created, taking big losses on the short sales and providing the big gains sought by the regular joes. “Eat the Rich: The GameStop Saga” is being marketed as a David vs. Goliath tale, and it is one. The only point of contention within the three-part series is that nearly everyone sees themselves as the David.

To give you a sense of just how much money was made by the real underdogs, the amateur investor (pictured above) who is credited in the series with first posting the proposal of the GameStop play says he turned $25,000 into $8 million. (Note the smile.) Not bad ROI. Along the way, hilarity ensues — though surely not to the professionals whose portfolios got rocked.

“Eat the Rich: The GameStop Saga” is executive produced by Emmy and Academy Award-winning filmmakers Dan Cogan (“Icarus,” which won Best Documentary Feature in 2017) and Liz Garbus (her “What Happened, Miss Simone?” was nominated for — but did not win — Best Documentary Feature in 2016; it won the Emmy). For this one, the duo landed what they called “exclusive access to key members of Reddit’s wallstreetbets community who fueled the short burn movement.”

The docuseries is a Story Syndicate production in association with The Wall Street Journal Studios. It is directed by Theo Love and executive produced by Cogan, Garbus, Love, Jon Bardin, and Jack Youngelson. “Eat the Rich: The GameStop Saga” is a bit short, but also maybe the perfect length for our social media- (and video game-)shaped attention spans.

“Eat the Rich: The GameStop Saga” opens with Jim Cramer of CNBC’s “Mad Money,” though it soon turns its lens to the no-name retail investors who turned a Reddit tip into a retirement fund. It dumbs down most of the fancy financial lingo into digestible definitions, which should endear itself to those outside the arena — much like Reddit and Robinhood did for amateur investors. But those who will undoubtedly get the most out of “Eat the Rich” are folks who have heard about the wild meme-stock swings but were too intimidated to wade into the potential Google rabbit hole.

The “Eat the Rich:” prefix and the “GameStop Saga” suffix perfectly set up a potential anthology here to explore similar little-guy financial triumphs. Netflix has maintained to IndieWire that this is a limited series, but the first installment does enough to make us hope we’re secretly right and they’re being cagey. The streamer should give this team an extra life like the green mushroom in a “Mario Bros.” video game. (Current trade-in value at a GameStop for a used version of 2012 game “New Super Mario Bros. U” for Nintendo Wii U is $7 store credit or $5.60 cash. The company then turns around and sells the game for $21.99; do that half-a-dozen times and you basically have GameStop’s entire business model in a nutshell.)

Part investing lesson, part cautionary tale, “Eat the Rich: The GameStop Saga” has some wild characters (probably the biggest of whom are pictured at the top of this story) for a documentary series about the short selling of stocks, which means it should not bore the uninitiated. And if you’re not careful, you just might learn something too.