Antonia Thomas could barely hold it together as she bid adieu to her Good Doctor family — and TVLine has exclusive video of her emotional farewell.

After four seasons as surgical resident Claire Browne, Thomas announced that she would depart the ABC medical drama. And in the June 7 finale, Dr. Browne accepted a position at the rural hospital in Guatemala where the St. Bonaventure team had just completed a life-changing mission. After she exchanged goodbyes with Shaun et al., Claire scrubbed in for her first procedure as lead surgeon (read post mortem).

The above video appears to have been filmed after Thomas shot her very last scene, as cast and crew gathered for her to say a few words.

“I feel so honored to have acted alongside you guys, and to call you guys my friends,” Thomas said, before giving special props to series lead Freddie Highmore. “Freddie [is] just possibly the best number one that anyone could ask for. The way you go about your day, just so gracious and focused and kind, along with your exceptional talent… I’m just so honored to have worked with you. 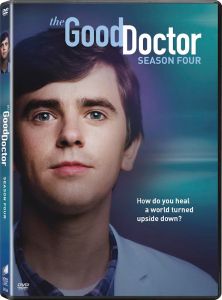 “I am going to miss you all dearly,” she continued. “This is so bittersweet for me to leave, but I will be back every now and then to say hello, and I wish you all the best on Season 5 and the seasons to come. Thank you so much for having me.”

As the crew offered Thomas a round of applause, Highmore wrapped his arms around his co-star and gave her a big hug.

Thomas’ goodbye speech is featured on The Good Doctor: Season 4 DVD, which is set for release on Tuesday, Aug. 31. In addition to the “Farewell to Antonia Thomas” featurette, the boxset includes all 20 episodes, along with deleted scenes and a blooper reel.

Season 5, meanwhile, premieres on Monday, Sept. 27 (at 10/9c), and will pick up some time after the events of the team’s Guatemala trip. In addition to Claire’s big decision, the two-part finale saw Shaun and Lea get engaged; Morgan and Park profess their love for each other; and local doc Mateo (new series regular Osvaldo Benavides) decide to return to the States to be with Dr. Lim… and to face a decades-old warrant for his arrest. We also found out that Andrews and his wife Isabel (last seen in Season 1, when she was portrayed by Marsha Thomason) had separated. (And lest we forget, prior to the finale, Glassman and Debbie called it quits.)

Watch the exclusive video above, then hit the comments with your reactions. Have you made your peace with Thomas’ departure?

(If you buy something through our retail links, TVLine may earn a commission.)

‘Back To The Future’ Stars Christopher Lloyd And Michael J. Fox Reunite For An Instagram Memory