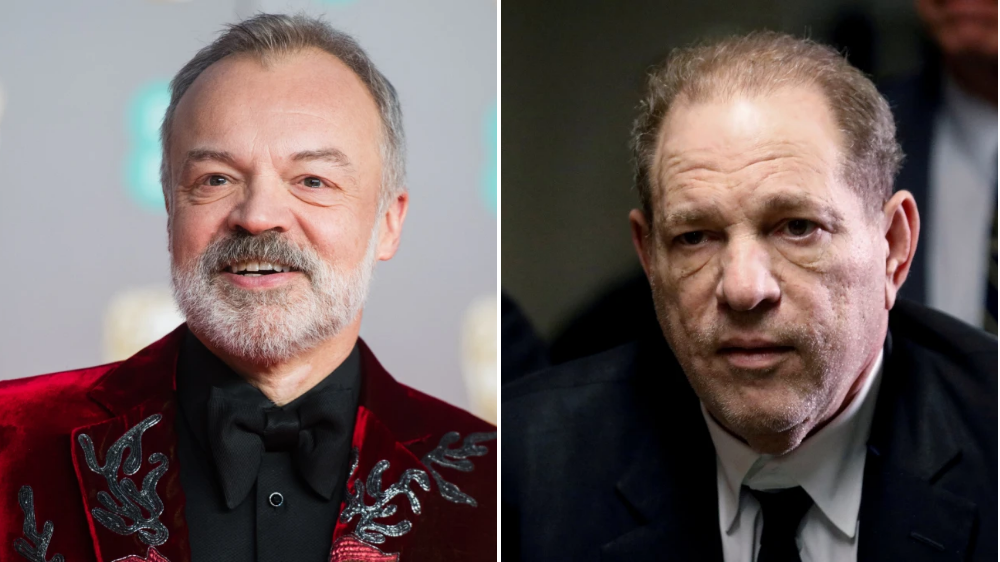 Graham Norton has revealed the worst ever guest he had on The Graham Norton Show was convicted rapist and former Hollywood producer Harvey Weinstein.

The disgraced mogul was convicted of several crimes, including third-degree rape, at a New York court in February 2020 and was sentenced to 23 years in prison.

Weinstein is also awaiting a further trial in Los Angeles after being charged with 11 counts of rape and sexual assault, to which he pleaded not guilty.

Before dozens of women came forward with allegations of sexual assault against him, sparking the #MeToo movement, Weinstein tried to book himself on the long-running BBC chat show, according to Graham.

The 59-year-old was at a Dublin event to promote his new book Forever Home, when he was asked by the audience who his ‘worst ever guest’ was and recounted Weinstein’s ‘chilling’ persistence about featuring on the programme.

Weinstein appeared in an episode of The Graham Norton Show in 2015, with stars David Tennant, Olivia Coleman and Jessie J.

Graham said according to Joe Magazine: ‘I often talk around who my least favourite guest was, but now, someone reminded me, I have a really good answer to this now. It’s Harvey Weinstein. He’s in jail, so he gets the prize for the worst guest ever.

‘And actually, it was weird, because he asked for my E-mail. And he E-mailed me something very nice, a complimentary thing. And then he decided he wanted to be on the show because he was going to promote something.’

‘And he E-mailed back again, “But I think…”, and I just had to turn to my booker and say “Can you please deal with this?” And at the time, I thought that sort of attitude, that kind of “Oh no, I’m going on”, that is what makes you a very good producer.

‘But of course, now that we know what we know, that is what makes him a predator. It was that kind of weird, tunnel-vision thing. And it was sort of chilling in retrospect, because I was just laughing at those emails. But you realise “Oh my God, that is an insight into how that man is”.’

In addition to legal proceedings in the US, Weinstein has also been charged with two counts of indecent assault against a woman in London.

Rosemary Ainslie, head of the CPS Special Crime Division, said: ‘Charges have been authorised against Harvey Weinstein, 70, following a review of the evidence gathered by the Metropolitan Police in its investigation.

‘The Crown Prosecution Service reminds all concerned that criminal proceedings against the defendant are active and that he has the right to a fair trial.’

Alongside his brother, Bob, Weinstein co-founded the entertainment company Miramax, which produced successful films including Sex, Lies, and Videotape (1989); The Crying Game (1992); Pulp Fiction (1994); Heavenly Creatures (1994); Flirting with Disaster (1996); and Shakespeare in Love (1998).

The Graham Norton Show continues on Friday at 10.40pm on BBC One and iPlayer

Metro.co.uk has reached out to reps for Graham Norton for comment