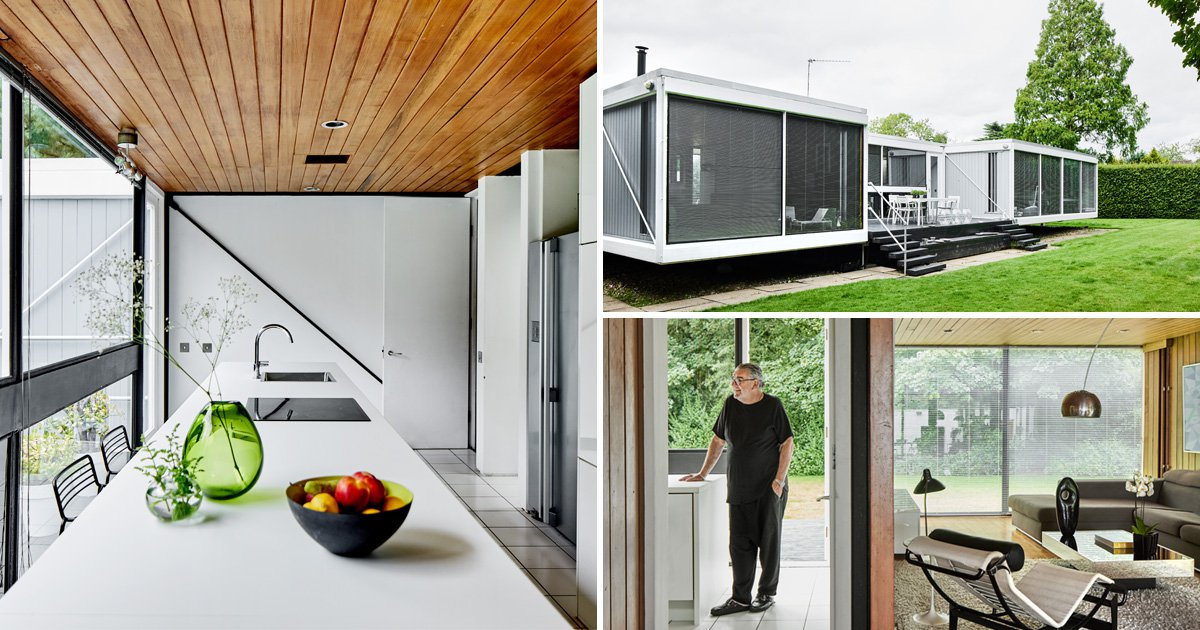 Rated as one of the greatest hairdressers in the world, Tim Hartley, who had a 30-year-career at Vidal Sassoon where he became International Creative Director, has coiffed everyone from Marc Almond to Faye Dunaway, and knows an iconic look when he sees one.

About 15 years ago, Tim, a huge fan of British and American West Coast mid-century architecture, went to view Space House in East Grinstead, in West Sussex.

Designed by young architects Peter Foggo and David Thomas (who went on to become directors of Arup Associates) in the early 1960s, and completed in 1965, the single-storey, steel-framed and plate-glass home is considered by aficionados to stand comparison with the celebrated Californian Case Study houses of the 1950s.

Tim, who was living on the King’s Road, in Chelsea, at the time, instantly fell for Space House’s bold modernist design but it sold to someone else.

Realising it was the prototype for a trio of similar houses built a year later on a small private estate in the sedate Berkshire village of Holyport, he decided to try his luck there.

‘I drove down to Manor Way, in Holyport, with my partner at the time, and immediately loved the location,’ says Tim, who started his hairdressing career in the late 1970s in Manchester before hitting the global stage with his avant-garde cuts and asymmetrical wedges (a la Marc Almond in his Soft Cell early 1980s heyday).

‘We spotted model Jodie Kidd sitting in the local pub, so thought it couldn’t be too much of a backwater.

‘I knocked on the door of the largest of the three houses and told the owner I was a huge fan of the architecture, so would he ever consider selling it to me? He asked me if I knew this was in the style of Mies van der Rohe, and that he would be in touch.’

Six months later, Tim — whose virtuoso hairstyles such as ‘the wrap’ and ‘the firefly abstraction’ were influenced by his love of 20th-century design from Bauhaus and the chair designs of van der Rohe and Le Corbusier — was in possession of the 3,530sq ft five-bedroom statement house.

Sitting in half an acre of landscaped private gardens, and with an annexe and outbuilding, it is raised above the ground on eight pilotis (or piers) with a flexible internal space arranged in a modular layout.

An open-plan living space spans the entire length of the easterly side of the plan, while a contemporary kitchen, library/study and utility space are all positioned centrally, with the bedrooms in the westerly wing.

He was even more certain he had found his spiritual home when he invited his mentor, hair supremo the late Vidal Sassoon CBE — who famously ended 1960s backcombing and lacquer with his radically new five-point cut — to the house. Sassoon proclaimed, ‘Wow Tim, this is more like it’.

He had thought Tim’s loft-style apartments in Chelsea and Pimlico had been too conventional, Tim recalls. ‘He was such a purist with his modernistic principles. I thought it was so cool that he loved it. He and his wife would often come over for a Sunday roast. They found it very peaceful here.’

Although Tim has used the home over the years for photoshoots and hair shows, and thrown big parties with the likes of LCD Soundsystem on the decks and even an impromptu performance by Damon Albarn, more than anything, he says, the home has been an extension of himself and his cultural identity, and become a part of his DNA.

Although the house is unlisted, Tim was passionate about preserving its integrity, with its extraordinary 60:40 glass-to-wall ratio, internal cedar-wood panelling and clean-lined yet nurturing, cosy living spaces.

‘When I first moved in, I did make a few key changes,’ Tim says. ‘I put in new full-height doors and had underfloor heating installed, as well as new bathrooms.’

He also had a new streamlined white kitchen put in, and geometric white shelving, by furniture designer Christophe Clement.

Probably the most significant thing, though, was to change the colour of the steel frame of the home from black to white — less Bauhaus, more California. Tim uses a special hard-wearing paint, used for oil rigs and yachts.

He is clearly enthralled by his little slice of West Coast modernism in sedate suburbia (all a stone’s throw from a traditional village green, just two miles from Maidenhead and six from Windsor), which he has shared for the past few years with his best friend Susie Mutch, who worked in marketing for Sassoon for many years.

It’s the kind of space, Tim says, that calls for pared-back minimalism and judicious furniture choices — his, unsurprisingly, entail classic 1950s and 1960s designs and a thoughtfully curated art collection. ‘It’s not the kind of home you should overcrowd with stuff,’ he says, ‘so I didn’t go on a mad shopping spree. It just looks better with less stuff in it.

‘I had started collecting a long time ago, and much of it fits the style of the house perfectly.’

In the dining area a white oval table with a cantilevered leg, by Rudi Bonzanini, given to Tim by Vidal, is a prized part of the collection.

Elsewhere, there are tables from the late 1950s Pan Am building in New York — now known as the MetLife building — a quartet of Marilyns, signed by Warhol, and a collection of sculpture and paintings by 1950s British artists.

With his international styling career on hold during the lockdowns, however, Tim has re-evaluated life, and has decided to sell up at Manor Way, putting it on the market for £1.85million.

He plans to move back to his roots, in York, to be closer to family and old friends — and will be taking Susie with him.

There will be no fusty beams and inglenooks for this pair, however, as they plan to move into another modernist home.

‘This kind of architecture really does offer zen living,’ Tim says. ‘I just feel you get a bit more clarity on things in this kind of environment.’

If you’re a buyer that has fallen in love with his modernist furniture collection, however, Tim might just be open to suggestion.

Manor Way is for sale for £1.85million via themodernhouse.com; timhartleyhairworld.com

How to get your Metro newspaper fix

Metro newspaper is still available for you to pick up every weekday morning or you can download our app for all your favourite news, features, puzzles… and the exclusive evening edition!

What Happened To Chase McNary After The Bachelorette?