Thirty years after last appearing on Designing Women, Jean Smart is back to her comedic roots with Hacks. On the new HBO Max original series, the 69-year-old actress plays aging Las Vegas standup performer Deborah Vance, a character reminiscent of comedic legend Joan Rivers who is forced to work with an entitled 25-year-old named Ava (Hannah Einbinder) to freshen up her material.

While Smart followed Designing Women with the short-lived High Society and Emmy-winning supporting roles on Frasier and Samantha Who?, the actress has most recently been enjoying a career resurgence while exploring more dramatic material with Dirty John, Fargo, Legion, Watchmen as well as Mare of Easttown, which is now airing on HBO.

But when it comes to doing Hacks, Smart tells ET’s Matt Cohen it “ticked every box.”

“I mean, if someone has said, ‘OK, now at this stage of the game, write down your ideal situation for a show,’ it had everything, which is the character, the writing, just everything about it,” Smart continues. “I mean, I just thought it was so unique and so original and so funny and very moving and I’m home every night for dinner.” 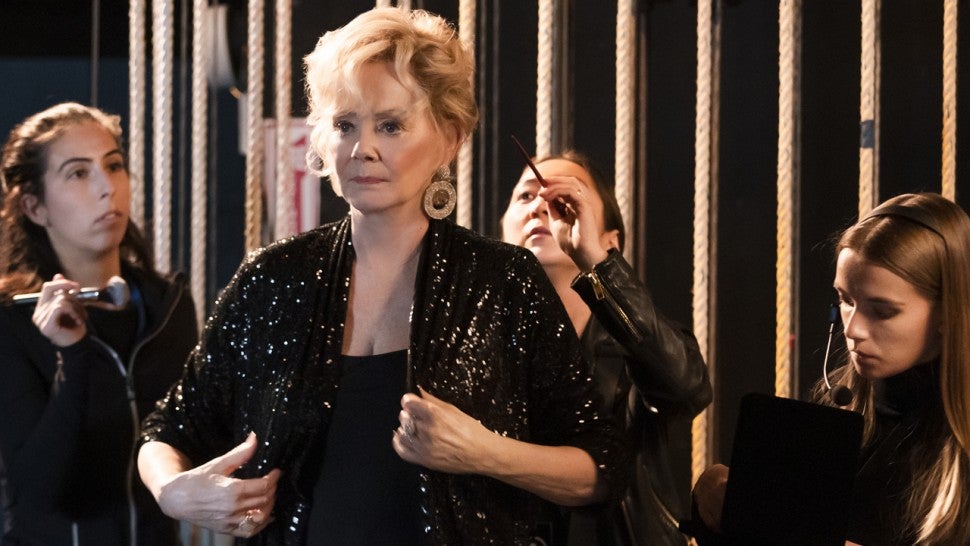 Not only did the series created and written by Paul W. Downs, Lucia Aniello and Jen Statsky strike a cord for Smart, but she appreciates how material was brought to life by the supporting cast, which includes Carl Clemons-Hopkins, Christopher McDonald, Mark Indelicato, Poppy Liu, Johnny Sibilly, Meg Stalter, Rose Abdoo and Kaitlin Olson recurring as Deborah’s daughter, DJ.

“You want everybody to be, you know, at the top of their game and it just makes it a lot more fun,” Smart says, joking that during one particularly notable and hilarious ensemble scene in the premiere with Clemons-Hopkins, Einbinder, Liu and others that her co-stars were going to run away with the series.

“There was a dinner table scene with this long, long dinner table… I’m just sitting and watching, and I’m going, ‘I’m so gonna get this show stolen right out from under me.’ But I didn’t care,” Smart recalls.

Of course, there’s no stealing any scene — or series for that matter — from Smart, who has made the most of her screen time through her acclaimed TV career.

And when looking back on her time on Designing Women, in which she played Charlene, Smart says it’s all a sense memory, recalling what it was like to reunite with Annie Potts for a charity table read last year.

“We actually got together and we did a reading of the pilot script,” Smart says. “It was bizarre. Annie and I were talking the next day and we were saying it literally felt like we had just done it last week. I could remember everybody’s intonations and everybody’s blocking. It was bizarre. It was fun.”

Hacks premieres with two episodes on Thursday, May 13 on HBO Max.

'Sabrina the Teenage Witch': The Guest Stars That Made Salem 'Say Dirty Words'