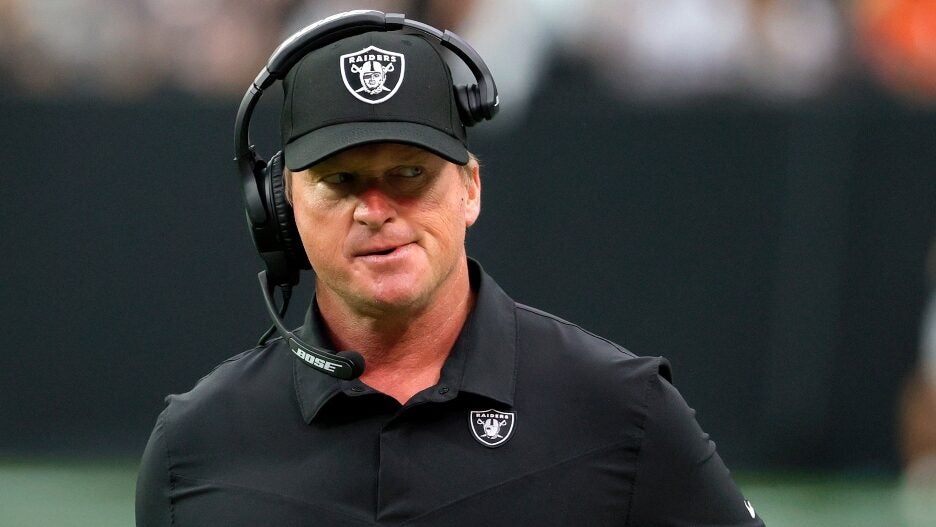 Jon Gruden used racist and homophobic slurs in emails with those in the league during his days as a broadcaster for ESPN’s “Monday Night Football,” a New York Times report found.

Shortly after the story came out on Monday, Gruden stepped down as coach of the Las Vegas Raiders, NFL reporter Tom Pelissero and SportsCenter reported Monday.

The Times’ story comes a few days an email that Gruden sent in 2011 when he used racist terms to denounce DeMaurice Smith, the executive director of the NFL Players Association. When asked about it over the weekend, Gruden admitted he went too far but that he didn’t have “a blade of racism” in his body.

But the Times found multiple instances of Gruden using derogatory terms in emails with those around the league, including former Washington Football Team executive Bruce Allen. Gruden criticized players who knelt during the National Anthem, denounced the hiring of female referees, and in at least one instance, said that eams shouldn’t be pressured to draft “queers” (a reference to Michael Sam, who came out shortly before he drafted in the 7th round by the St. Louis Rams).

The emails were sent between 2011 and 2018, all of which were Gruden was a broadcaster for ESPN.“The comments are clearly repugnant under any circumstance,” an ESPN spokesperson said in an emailed statement to TheWrap on Monday.

In the emails, Gruden referred to NFL commissioner Roger Goodell as a “faggot” and “anti-football pussy” and said that former player Eric Reid, who along with Colin Kaepernick was one of the most notable players who protested during the National Anthem, should be fired.

Gruden was hired by the then Oakland Raiders, where he was the head coach from 1998 to 2001, before the 2018 season. The team moved to Las Vegas last year.

A representative for the Raiders did not immediately respond to TheWrap’s request for comment.