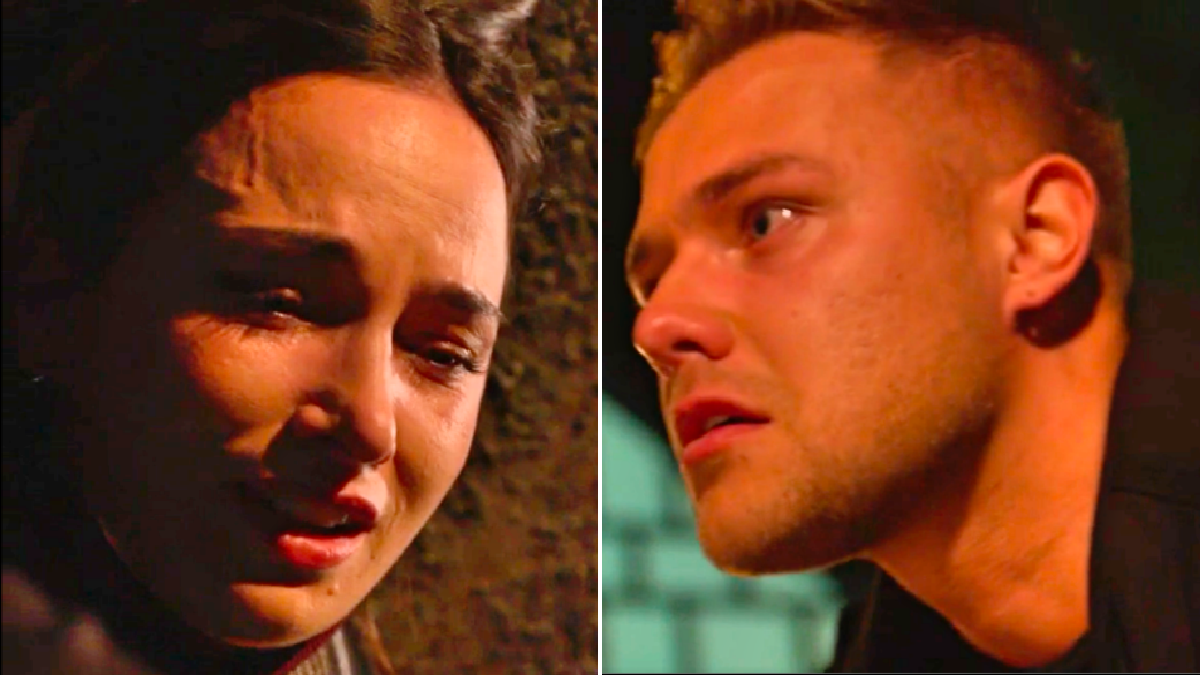 Maya’s (Ky Discala) bloodthirsty ways ultimately got the better of her in Hollyoaks, as she seemingly met a grisly end at the hands of lover Ethan Williams (Matthew James-Bailey) in a case of an accidental gunshot wound.

The devilish criminal’s penchant for causing chaos has left beau Ethan disturbed over the past few weeks, after she made it clear that she wanted Darren Osborne (Ashley Taylor Dawson) dead.

Darren, as viewers know, was taken hostage by the duo last year, after he witnessed them holding up a jewellery store. Ethan wanted to let Darren go free, but Maya demanded that he be killed.

Ethan, however, defied her wishes and allowed Darren to return to his family, unharmed. Maya, unwilling to let this go, made multiple attempts on both Darren and Nancy’s (Jessica Fox) life, but she’s been unsuccessful thus far.

Fearing for both their lives and that of their unborn child, Darren and Nancy hightailed it out of the village earlier this week. Maya, however, was desperate to shed their blood, and thus Friday’s (January 7) offering of the Channel 4 soap saw her concoct a pan.

Stealing Ethan’s phone, she texted Darren, telling him that it was safe to return. Darren and Nancy subsequently set foot back in the village, but Ethan intercepted, telling them to leave at once.

Maya soon discovered that her beau had ‘betrayed’ her yet again, and thus she thought it was time she taught him a lesson. In twisted scenes, she claimed to have endangered the lives of both his own family and those of the Osbornes!

She ordered Ethan to choose who to save, and thus he set off to locate every member of his clan, as well as Darren and Nancy, desperate to protect them all.

After doing so, he berated Maya for being so sadistic, but little did he know that she hadn’t played her trump card yet, as she video called him, revealing that she was stalking Serena Chen-Williams (Emma Lau) with a gun!

Ethan successfully tracked her down in The Dog car park, and told her off once more for her horrific behaviour. Maya, however, laughed in his face, informing him that she planned on finishing what she started.

She took hold of the firearm in her pocket, but Ethan – desperate to save Serena’s life – wrestled with his girlfriend’s gun. Moments later, a gunshot sounded.

But who was shot?

In a huge twist, it was Maya herself who had taken the bullet. She collapsed to the floor, telling Ethan that this was his fault, before succumbing to her injuries.

Ethan sobbed by her body, heartbroken to have lost his lover. But he had little time to mourn, as moments later, a loud bang was heard!

Hollyoaks, as fans are aware, is in the middle of an explosive week, as the Salon De The will be engulfed in flames. The sound Ethan heard at the conclusion of Friday’s offering was the patisserie going up in smoke.

The previous edition of the serial drama hinted that Becky Quentin (Katie McGlynn) was to blame for the blaze, but the latest episode suggests otherwise, alluding to the fact that perhaps Maya had followed through on her threat and planted an explosive device in a bid to teach Ethan a lesson by killing those he’s fond of.

Monday’s (January 10) edition, much like this one, will presumably tell the events of the same day from another series of characters’ perspectives, before Tuesday’s (January 11) hour-long special reveals who is to blame for the blast, as well as who perishes.

Future scenes will see Ethan cross paths with Sienna Blake (Anna Passey) and Ste Hay (Kieron Richardson), and he’ll reveal to the duo that he’s got a body in his boot.

'The Last Kingdom' Season 4: James Northcote Talks about the New Season and Reveals Who He Wishes He Could Work with More