Netflix has unveiled the trailer for “Ozark” Season 3, and it’s clear that the Byrde family is only getting darker.

The new season, which will center on the power struggle between Marty (Jason Bateman) and Wendy (Laura Linney) Byrde as they endeavor to keep their casino thriving, won’t lack for machinations, violence, and the relentless bleakness that has defined the crime drama series.

The “Ozark” Season 3 trailer opens with Wendy apparently pointing a gun at her husband, and the following snippets, which range from waterboarding and other torture to a truck explosion, only ramp up the intensity. “Ozark” has offered no shortage of gritty violence over its last two seasons, and Season 3 is shaping up to be the series’ most brutal installment yet.

Per Netflix’s official synopsis: “It’s six months later, the casino is up and running, but Marty and Wendy are fighting for control of the family’s destiny. Marty preaches keeping the status quo.  Aided by an alliance with Helen and drug cartel leader Omar Navarro, Wendy plots for expansion. But when Wendy’s brother Ben comes into town, everyone’s lives are thrown into chaos.” 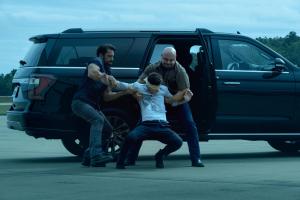 While additional plot details are still under wraps, executive producer and star Bateman has teased that Linney’s character will play an increasingly prominent role in the upcoming season. Wendy has become more domineering and powerful as she continued to embroil herself in her family’s criminal affairs, and if the forbidding shot in the Season 3 trailer is any indication, things may finally be reaching a breaking point for the Byrde family.

The series’ especially morbid world and remorseless characters hasn’t hampered its Emmys success: “Ozark” has been nominated for 14 Emmys over its last two seasons. Aside from Garner’s win for best supporting actress last year, Bateman won for directing.

“Ozark” Season 3 premieres on Netflix on Friday, March 27. Check out the official trailer for the upcoming season below:

Kim Kardashian divorce LIVE: Revealed – Kanye West made one MASSIVE mistake that proved to Kim it was all over

This Week In Trailers: The Comedy Store, After So Many Days, I Am Greta, Wolfwalkers, Bigorexia