Piers Morgan has admitted to giving Meghan Markle and Prince Harry ‘a hard time’ while slamming Prince Andrew on his TalkTV show.

Former Good Morning Britain host Piers, 57, famously quit his slot on the ITV breakfast show back in March 2021 after refusing to apologise for comments made about the Duchess of Sussex’s mental health.

He hasn’t backed down from sharing his dislike of the couple, who moved to Montecito, California in July 2020, after they stepped away from their senior royal roles.

However, in a rare move for Piers, he said the Duke and Duchess of Sussex’s actions ‘pales into insignificance’ when compared to Prince Andrew, who he said ‘paid millions of dollars to make a sex abuse case go away.’

On Monday’s episode of his Uncensored show, he was joined by Vanity Fair’s royal editor Katie Nicholl and socialite Lady Colin Campbell.

The trio gave their thoughts on the fact the Queen’s disgraced son Prince Andrew is speculated to have a significant role in the upcoming Platinum Jubilee celebrations. 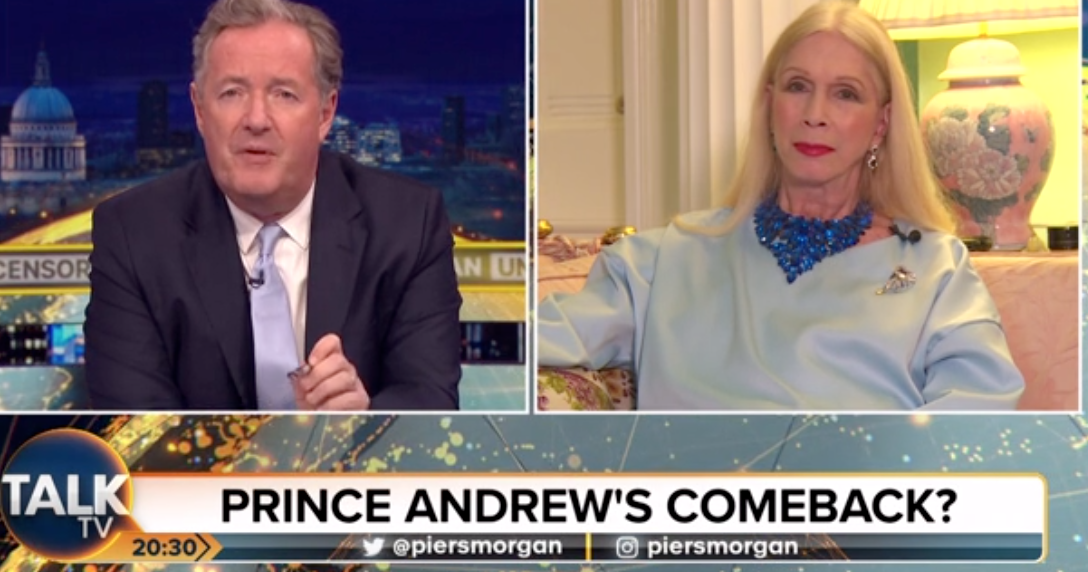 Piers asked: ‘Is Prince Andrew trying to weasel his way back into the Royal Family and public?

‘Katie, this does grate on me, I have to say. I think if you’re going to pay a woman a rumoured $11million (£8,750,000) to make a sex abuse case go away, having said you’re going to fight it all the way to clear your name and then you just cave – I don’t think you’re entitled to just slither back into public life.’

‘I agree with you,’ the Vanity Fair editor replied. ‘I think it’s time for him to go away, actually in the same way that that settlement just kind of struck it all out.

‘The dignified and respectful thing to do for the Queen and for the Royal Family is to bow out gracefully, as gracefully as you possibly can.’

Katie went on to share how her American audience finds it ‘troubling’ to see the Queen with Andrew, with Piers agreeing: ‘It does.’

He then invited fellow guest Lady Colin Campbell to give her view, where he appeared to defend the Duke and Duchess of Sussex.

Piers continued: ‘First of all, good evening to you – I do think that, for example, we give Meghan and Harry a hard time.

‘I think justifiably, in most cases, but what they’ve done, to be honest, pales into insignificance in my opinion, to a senior member of the Royal Family paying millions of dollars to make a sex abuse case go away.

‘But you don’t share this view, you think he should be able to come back?

‘I certainly don’t share this view,’ she replied, shaking her head.

Earlier this year, Prince Andrew settled a lawsuit with Virgina Giuffre, who had accused him of sexual assault which he vehemently denied.

She launched a civil suit in the US, alleging she was forced to have sex with the Duke Of York when she was 17. Prince Andrew has always denied the allegations and said he has no recollection of ever meeting her.

When is Paloma Faith's baby due?